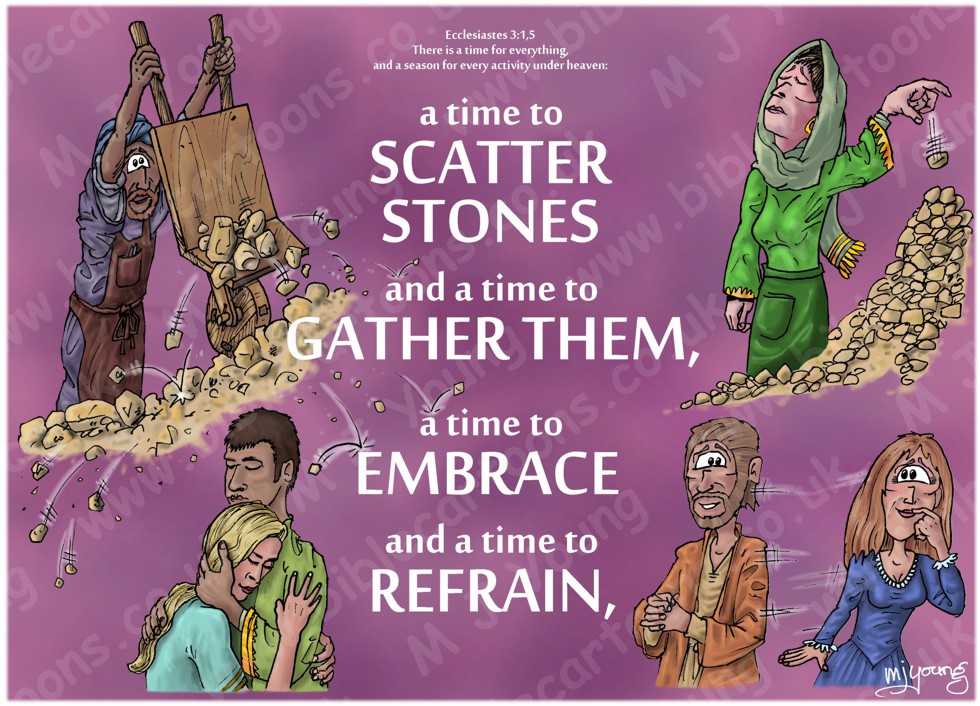 Ecclesiastes 3:1,5 (ANIV)
1 There is a time for everything, and a season for every activity under heaven:

Scatter, Gather, Hold, Part.
Now to the particulars: verse 5 – “a time to scatter stones and a time to gather them, a time to embrace and a time to refrain, …” the polar opposites in this verse are scattering stones & gathering stones, embracing (or holding someone) & refraining (or choosing not to embrace or hold someone).

In verse 5 Solomon is comparing scattering & gathering stones with embracing & refraining from that embrace. Again he uses polar opposites to make the point. The action of gathering stones is inclusive – collecting them, possibly in reference to the building mentioned in verse 4.

In my picture you can see a man in the top left who is tipping stones out of a wheel barrow. He is representative of “scattering stones”, whereas the woman (top right) with her nose in the air who is dropping a single pebble on a large pile of stones by her feet is representative of “gathering them (stones).”

Solomon then wrote of the display of affections (”a time to embrace”), probably of a man to a woman and vice verse. That is why I have drawn a young man & woman embracing in the bottom left of my picture.

The opposite of embracing is standing apart, or refraining from the previous mentioned embrace. There is no reference in the poem as to what is meant by “refraining from embrace”. We can not infer any qualities or meaning on the phase – it would be unwise to infer any anger, enmity, mistrust, or any other emotional condition that causes the “refraining from embrace”; it is simply the opposite of engaging in an embrace. The Bible in basic English uses the phrase “a time for kissing and a time to keep from kissing;” which would add a more intimate dimension to the action involved. The Message version states, “A right time to embrace and another to part,” referring more to ending an embrace at a particular point in time, rather than to abstinence from embracing. But the exact meaning is best left to personal interpretation.

In my picture I have drawn a man & a woman who are passing each other, but who have clearly seen & noted each other. The man’s hands are drawn in a prayer-like gesture, whilst the woman’s hands are lowered, yet subtly seeking his! Perhaps they are passing strangers who are attracted to each other? Perhaps they are acquaintances or friends, but want to get to known each other more intimately? Perhaps he is seeking to follow the Lord God (hence the interwoven hands in prayer) & she is drawing his attention away from that pursuit? Certainly abstinence from physical contact with the opposite sex, whilst pursuing a closer prayerful contact with the Lord God, would give purpose to the phrase “refraining from embrace”.