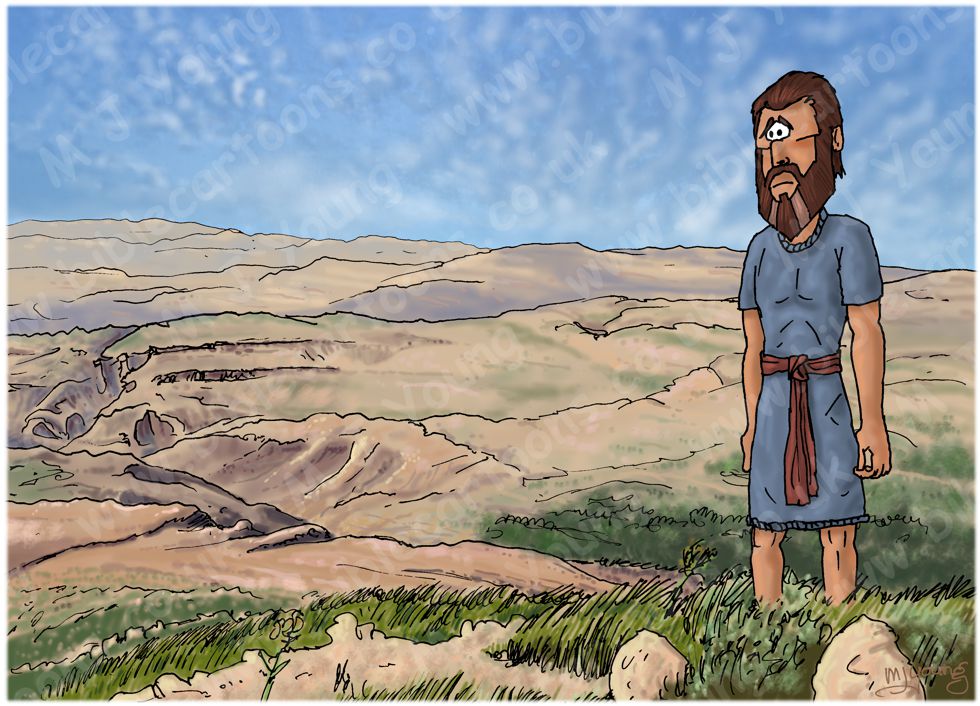 Deuteronomy 34:5-7 (ANIV)
5 And Moses the servant of the Lord died there in Moab, as the Lord had said. 6 He buried him [1] in Moab, in the valley opposite Beth Peor, but to this day no-one knows where his grave is. 7 Moses was a hundred and twenty years old when he died, yet his eyes were not weak nor his strength gone.

TIME OF DAY:
I have set this scene at mid day.

LIGHTING NOTES:
The sun is overhead in this scene.

RESEARCH/ADDITIONAL NOTES:
I researched the valley opposite Beth Peor and found some photographs of that location on the internet. The landscape for this scene is based on those photographs. I thought I would include Joshua, son of Nun, Moses’ assistant in the scene. He is looking down into the valley, sad & dejected at the death of Moses.

It is interesting that no-one knows the location of Moses’ grave. Moses was being disciplined for his act of unbelief (see Numbers 20:1-13 – the waters of Meribah) by not being allowed to enter the Promised Land. Nevertheless, he died in faith and as an honoured servant of the Lord God. It is possible to translate the clause “He buried him” (beginning of verse 6 above) as “he was buried” (meaning that men, not God, buried him). But the statement “to this day no one knows where his grave is” might indicate that either the Lord alone or through the agency of His angels buried Moses; such that no-one knows where Moses body lies. Jude (v. 9) [2] also seems to confirm this interpretation. Clearly God didn’t want anyone to venerate the place where Moses was buried. Perhaps this was to prevent people from falling into sin of ancestor worship, since Moses was a major figure in the history of the Israelites.

This is the Bible Gateway – Encyclopedia of the Bible entry for Beth Peor:
‘BETH-PEOR beth pe’ ôr ([or more prob. beyt pegôr, the ’ayin standing for ghayin] LXX Josh 13:20; Deut 34:6; house of Peor). A city of Moab which was assigned to the tribe of Reuben (Josh 13:20). Before entering the Land of Canaan the Israelites encamped in the valley opposite Beth-peor while Moses viewed the Promised Land from the top of Mount Pisgah (Deut 3:29). Here Moses committed certain laws to them (Deut 4:46). This is the valley where God buried Moses (34:6). Beth-peor was likely the place where Baal-peor was worshiped as patron deity (Num 25:3, 5, 18). It is identified with Khirbet esh-Sheikh-Jayil N of Mount Nebo and W of Hesbon.

As for the meaning of Peor. It has been explained as “Opening” or “Chasm,” coming from a root appearing in Arab. as fagara “open wide, gape.” The Syr. cognate (p’râ) means “a chasm.” ‘
[Source: https://www.biblegateway.com/resources/encyclopedia-of-the-bible/Beth-Peor]

The Holman Bible Dictionary informs us that…”It was located at modern khirbet Uyun Musa, twenty miles east of the north end of the Dead Sea.”

The very end of this book of the Old Testament has this to say about Moses…
Deuteronomy 34:10-12 (ANIV)
10 Since then, no prophet has risen in Israel like Moses, whom the Lord knew face to face, 11 who did all those miraculous signs and wonders the Lord sent him to do in Egypt—to Pharaoh and to all his officials and to his whole land. 12 For no-one has ever shown the mighty power or performed the awesome deeds that Moses did in the sight of all Israel.

no prophet has risen in Israel like Moses, etc.—Among all the succeeding prophets none was found so eminent in all respects nor so highly privileged as Moses; with him God spoke face to face—admitted him to the closest familiarity and greatest friendship with himself. Now all this continued true till the advent of Jesus Christ, of whom Moses said, “A Prophet shall the Lord your God raise up unto you from among your brethren, like unto me;” but how great was this person when compared with Moses! Moses desired to see God’s glory; this sight he could not bear; he saw his back parts, probably meaning God’s design relative to the latter days: but Jesus, the Almighty Savior, in whom dwells all the fullness of the Godhead bodily, who lay in the bosom of the Father, he hath declared God to man. Wondrous system of legal ordinances that pointed out and typified all these things! And more wonderful system of Gospel salvation, which is the body, soul, life, energy, and full accomplishment of all that was written in the LAW, in the PROPHETS, and in the PSALMS, concerning the sufferings and death of Jesus, and the redemption of a ruined world “by his agony and bloody sweat, by his cross and passion, by his death and burial, by his glorious resurrection and ascension, and by the coming of the Holy Ghost!” Thus ends the PENTATEUCH, commonly called the LAW of MOSES, a work every way worthy of God its author, and only less than the NEW COVENANT, the law and Gospel of our Lord and Savior JESUS CHRIST.

Now to the ever blessed and glorious TRINITY, FATHER, WORD, and SPIRIT, the infinite and eternal ONE, from whom alone wisdom, truth, and goodness can proceed, be glory and dominion for ever and ever. Amen.
[Source: Adam Clarke’s Commentary]

[2]
Jude – verse 9 But even the archangel Michael, when he was disputing with the devil about the body of Moses, did not himself dare to condemn him for slander but said, “The Lord rebuke you!” 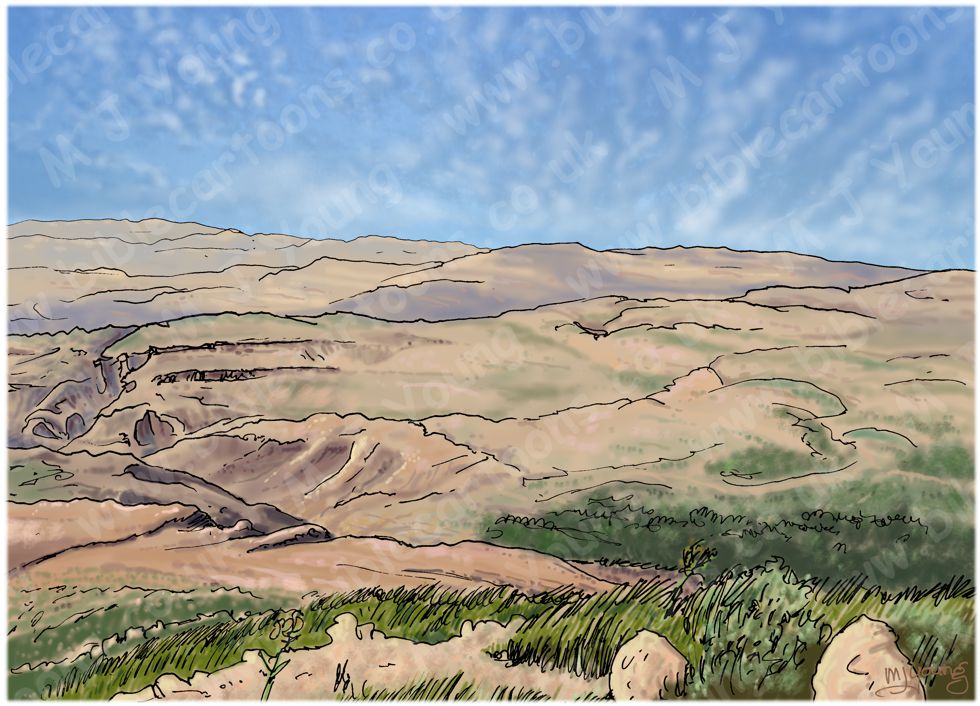