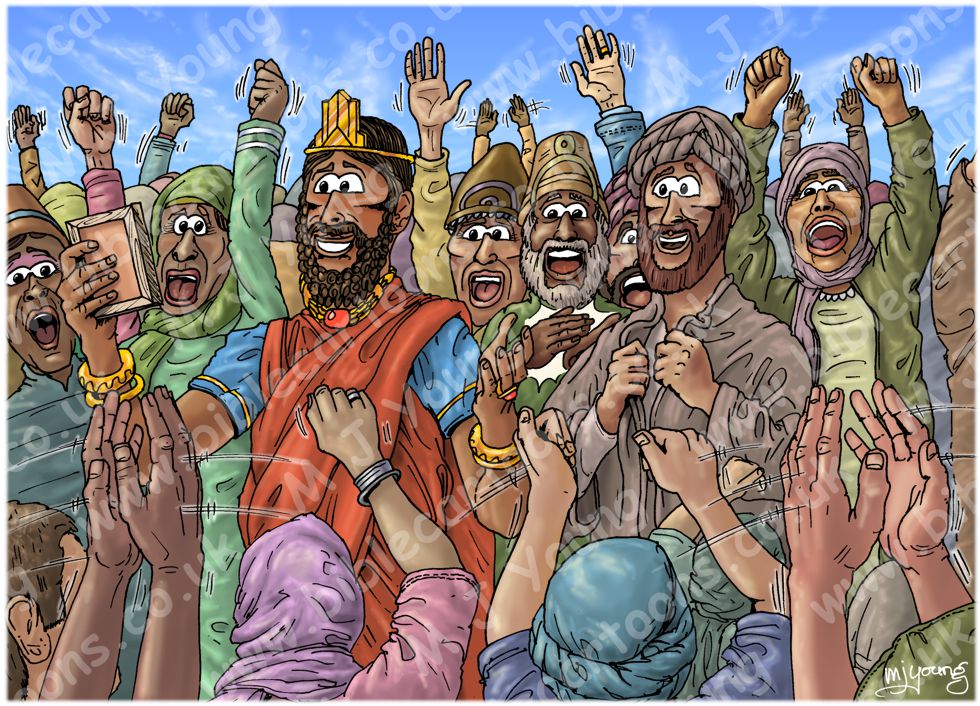 Daniel 6:25-28 (NLT)
25 Then King Darius sent this message to the people of every race and nation and language throughout the world: “Peace and prosperity to you!
26 I decree that everyone throughout my kingdom should tremble with fear before the God of Daniel.
For he is the living God,
and he will endure forever.
His kingdom will never be destroyed,
and his rule will never end.
27 He rescues and saves his people;
he performs miraculous signs and wonders
in the heavens and on earth.
He has rescued Daniel
from the power of the lions.”

LIGHTING NOTES:
Sunlight from above lights this scene.

CHARACTERS PRESENT:
In the centre of the cheering crowd, on the left is king Darius (in red and gold robes), on the right is Daniel, in his usual grey robes.

RESEARCH/ADDITIONAL NOTES:
There are two versions of this scene:
01) (This page) Daniel 06 – The lions’ den – Scene 15 – Praise the Lord (Colour version).

02) (Next page) Daniel 06 – The lions’ den – Scene 15 – Praise the Lord (Sunlight version). This is the same scene as above, with strong rays of sunlight slanting down from the top left to the bottom right.

This scene is the final one in the set of cartoons that illustrate the story of Daniel in the lions’ den. We see the king delivering his speech to a loyal, cheering crowd of his subjects.

I expect the proclamation or message that went out from king Darius to his subjects was actually delivered by hundreds or even thousands of horse/pony riders, taking the message to the far reaches of the empire, over the course of many months. However, that would be very difficult to illustrate! So I have elected to show the king reading his message from a wax tablet, with Daniel by his side, and surrounded by a cheering, waving crowd. I don’t suppose the king would have actually proclaimed anything himself, he would have had the equivalent of town criers for that! I don’t suppose he would have allowed anyone to come a close to himself as I have drawn them either, for fear of assassination, but it makes a nice picture the way I’ve drawn it… we’ll call it my artistic license!