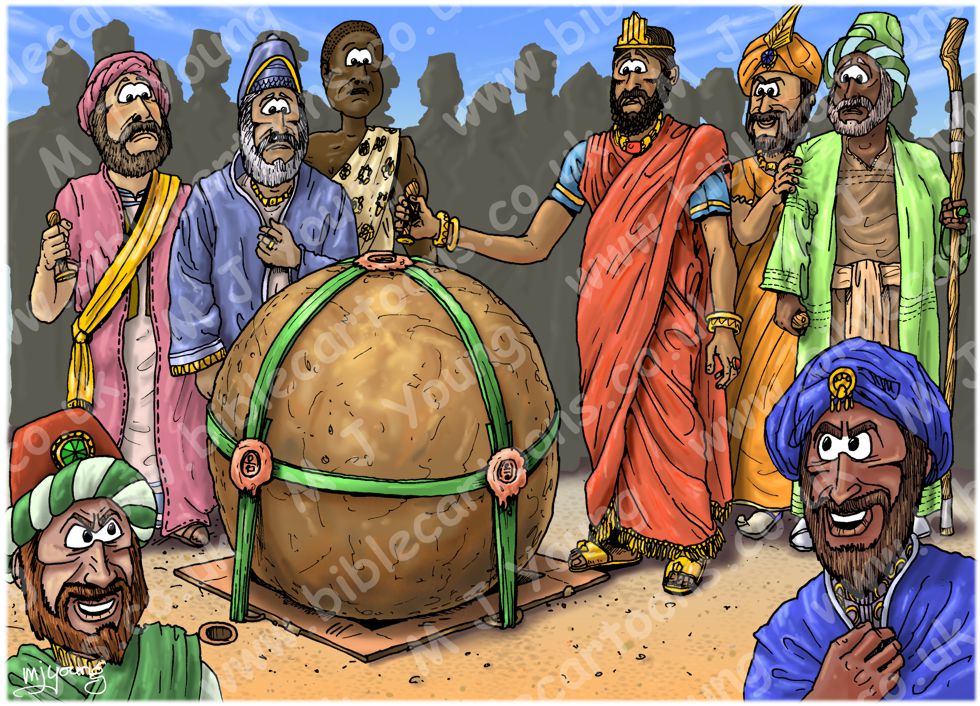 Daniel 6:17 (NLT)
A stone was brought and placed over the mouth of the den. The king [Darius the Mede] sealed the stone with his own royal seal and the seals of his nobles, so that no one could rescue Daniel.

TIME OF DAY:
Only a few moments after the previous scene, so in the afternoon.

LIGHTING NOTES:
Sunlight from above and left illuminates this scene.

CHARACTERS PRESENT:
In the foreground are two of the three wicked administrators I have drawn in previous scenes.
In the background, from left to right: two nobles (in pink and blue robes respectively), a servant in leopard skin, King Darius (in red robes and gold crown), the third wicked administrator (in gold/orange robes), another nobleman (in green robes).
I have drawn a line of simple outline figures behind the main characters, representing a crowd of onlookers, nobles, the king’s courtiers, etc, in the background.

RESEARCH/ADDITIONAL NOTES:
When I first drew Daniel being lowered into the lions’ den I decided to draw the opening in the ceiling of a cave, rather than at the side of a cave, reasoning that the lions were less likely to escape that way! Continuing with the logic, the large stone seen in this picture has been rolled across the opening above the den’s aperture, sealing off access to the cave. I have drawn green ribbon crossing the stone and tied to bronze loops on the square den aperture. You can see large blobs of pink/red wax at the intersections of the ribbons, which have been stamped with the royal seal (a metal and wood hand stamp, seen in the king’s hand) and the seals of his nobles (seen in the hands of the nobleman in pink, and the one in green).

The point of stamping the royal and noble seals into wax was to provide a means of determining whether or not the stone had been moved during the night. If someone had wanted to free Daniel they would have had to break the wax seals and removed the green ribbons so that the stone could be moved and Daniel rescued. In this situation the wax seals provided an effective anti-tampering device. The same technique was employed by Pontius Pilate in first century Jerusalem to secure the tomb of Jesus the Christ (see Matthew 27:66)