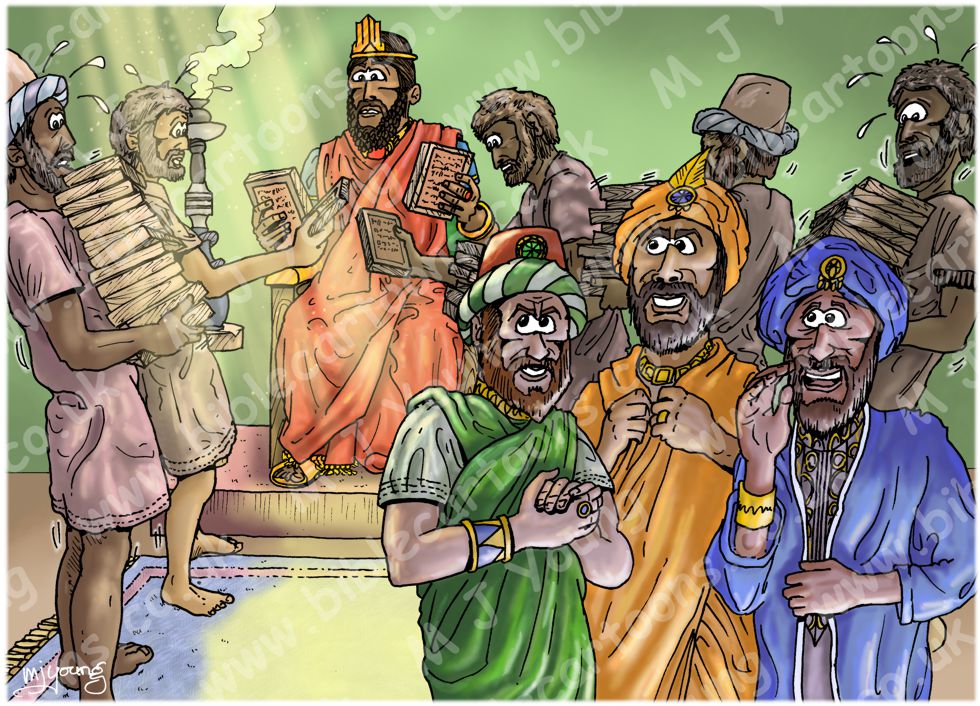 Daniel 6:14-16 (NLT)
14 Hearing this, the king [Darius the Mede] was deeply troubled, and he tried to think of a way to save Daniel. He spent the rest of the day looking for a way to get Daniel out of this predicament. 15 In the evening the men went together to the king and said, “Your Majesty, you know that according to the law of the Medes and the Persians, no law that the king signs can be changed.”
16 So at last the king gave orders for Daniel to be arrested… [and thrown into the den of lions. The king [Darius the Mede] said to him, “May your God, whom you serve so faithfully, rescue you.”]

TIME OF DAY:
Not specified I the Bible text. Vere 14b states that the king “spent the rest of the day looking for a way to get Daniel out of this predicament.” So I have set this scene in the late afternoon.

LIGHTING NOTES:
As with the other throne room scenes in this set, this one has direct sunlight streaming in from above, with dust motes sparkling in the light beams. You can see a pool of sunlight on the floor rug, before the king’s throne. The sunlight is just catching the edges of the three administrators in the foreground.
There is a second source of light, which illuminates the three administrators standing in the foreground. The light source is unseen, but it throws a bright white glow underneath the figures.
I have placed the three servants on the right of te king in quite dark shadow, so that they recede into the background, when compared to the well lit foreground administrators.

CHARACTERS PRESENT:
In the foreground are the three administrators who are out to depose Daniel, which we have seen in previous scenes in this Daniel 06 cartoon set.
In the background we can see king Darius sitting on his throne, looking at many wax tablets which contain the laws of the empire. There are five servants bringing in many such wax tablets for the king to read. The presence of all those tablets is meant to indicate the king’s fervent search for a solution to Daniel’s problem.

RESEARCH/ADDITIONAL NOTES:
Most of the elements in this scene have been designed in previous scenes, ie the king and his costume, the three administrators, their gleeful, evil expressions, and their attire, etc. I decided to have the male servants costumes look similar to the outfits the female servants are wearing in previously illustrated scenes (eg scene 01 and 06).

I have drawn the three administrators in the foreground, with expressions of wicked enjoyment at the predicament for Daniel they have engineered. The blue one on the right has a lifted hand and is whispering to his colleagues. They are looking smug and satisfied that Daniel appears to be doomed.

Notice that I have included the hookah (smoking device) on the left hand side of the king as we view the scene, as it was present in the previous throne room scene I drew for this cartoon set (scene 03).