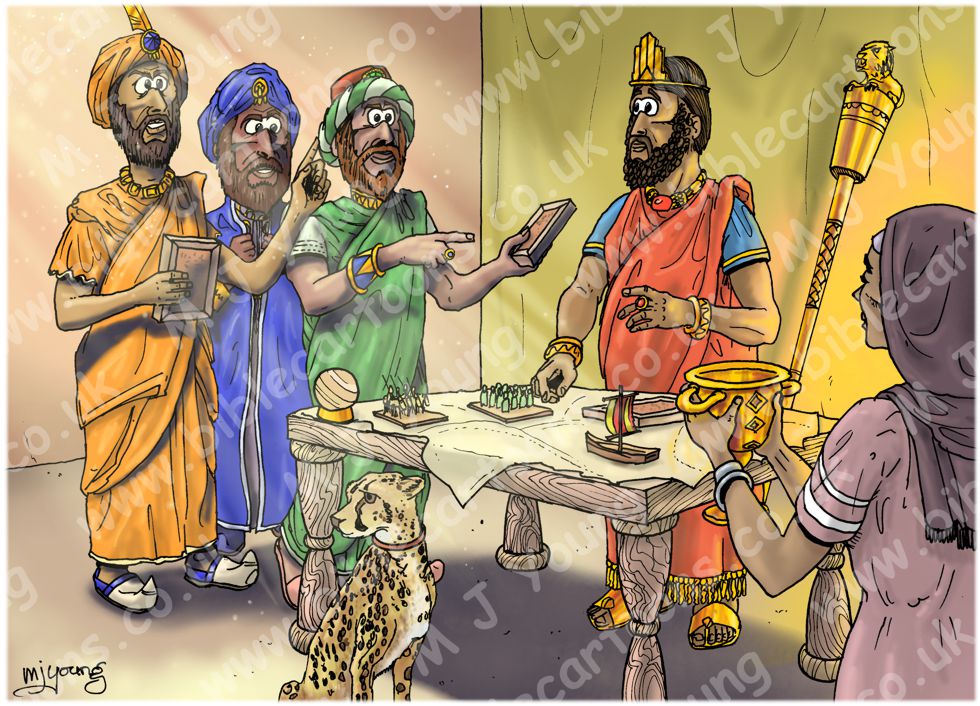 Daniel 6:12-13 (NLT)
12 So they went straight to the king [Darius the Mede] and reminded him about his law. “Did you not sign a law that for the next thirty days any person who prays to anyone, divine or human—except to you, Your Majesty—will be thrown into the den of lions?”
“Yes,” the king replied, “that decision stands; it is an official law of the Medes and Persians that cannot be revoked.”
13 Then they told the king, “That man Daniel, one of the captives from Judah, is ignoring you and your law. He still prays to his God three times a day.”

TIME OF DAY:
Unspecified in Bible text. I imagine this is set a few minutes after the previous scene, so in early afternoon.

LIGHTING NOTES:
In this scene the administrators are with the king in his palace. There are two light sources in this scene, the first is sunlight, coming from the top left corner and that is very pale white/yellow in colour. The second source of light is from an unseen brazier, behind the servant girl on the right, which is throwing a darker yellow/orange colour into the scene.
Note also the dust motes in the air; little sparkles of pale yellow, matching those I’ve added to scene 03 – Royal decree.

CHARACTERS PRESENT:
From left to right: the three administrators seen in previous scenes. King Darius. A servant girl with a golden drinking vessel (a similar idea to the servant with the golden bowl of fruit we saw in scene 01).
There is a cheetah (Acinonyx jubatus) in the foreground, perhaps the king’s pet?

RESEARCH/ADDITIONAL NOTES:
In this scene we see the three administrators (from previous scenes) running into king Darius’ presence to inform on Daniel. I hope their facial expressions suggest an eagerness to present their “case” to the king and looking gleeful, with barely suppressed evil joy at the impending trouble they expect to cause Daniel. The administrators are pointing at their wax tablets (which contain the King’s signed law forbidding anyone from worship anyone or anything other than the king himself) with barely contained glee, no doubt thinking to themselves “We’ve got Daniel now!”

I designed the table and its contents to represent a map showing military matters, perhaps this is a room in the palace where the king plans his next military adventure, since we see models of troops and a ship on a map. Notice the king’s gold sceptre, which we saw in scene 01 & 02, leaning against the wall.