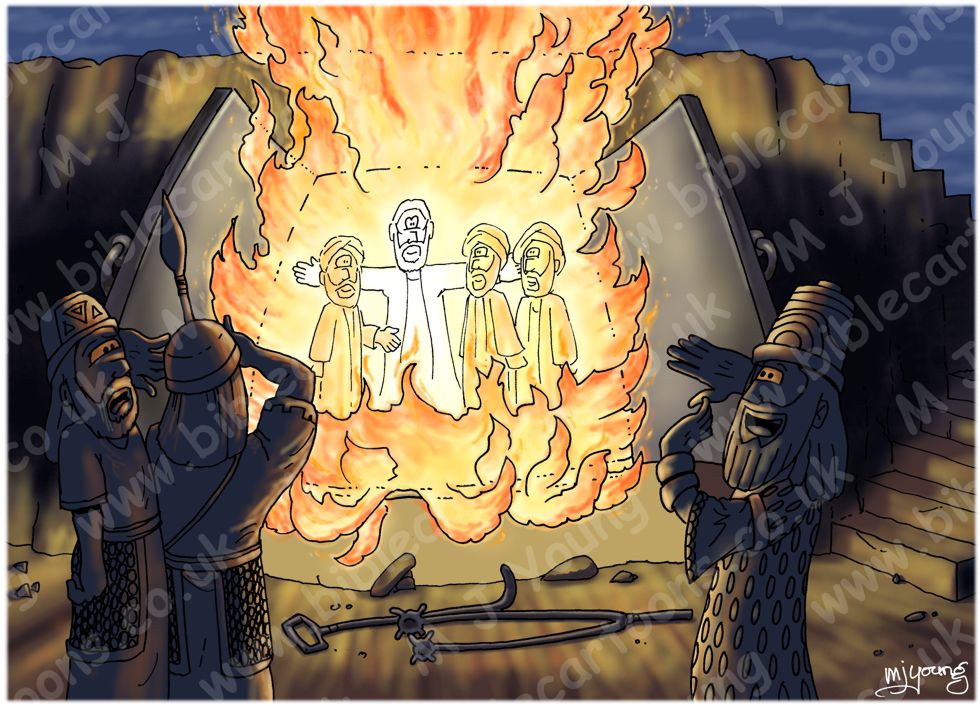 Daniel 3:24-25 (NLT)
24 But suddenly, as he was watching, Nebuchadnezzar jumped up in amazement and exclaimed to his advisers, “Didn’t we tie up three men and throw them into the furnace?” “Yes,” they said, “we did indeed, Your Majesty.”
25 “Look!” Nebuchadnezzar shouted. “I see four men, unbound, walking around in the fire. They aren’t even hurt by the flames! And the fourth looks like a divine being!” [1]

TIME OF DAY:
The scriptures do not tell us what time of day this story occurs. As with the previous cartoon, I have made it early evening, with a darkening sky, in order to make the lighting of the scene more dramatic.

LIGHTING NOTES:
The flames form the furnace provide the main light source for this scene.

CHARACTERS PRESENT:
King Nebuchadnezzar is on the right of the cartoon, with 2 guards on the left. Notice they have their hands up to shield themselves from the intense heat of the furnace. The 3 Hebrew men Hananiah, Mishael, and Azariah (who were renamed by their Babylonian captors: Shadrach, Meshach, and Abednego) can be seen with the mysterious fourth figure, in the fire of the furnace.

RESEARCH/ADDITIONAL NOTES:
As I stated in the previous cartoon, the fiery furnace of this story could have been a brick kiln, or an open topped blast furnace. I have elected to show the latter. This type of furnace would be in constant use, since the Babylonians disposed of their dead by cremation. In then previous cartoon the action takes place on the top of the furnace, but this is a short time later. We see that King Nebuchadnezzar has rapidly decended the steps that laed from the top of the furnace, to it’s open side. I decided to have 2 huge doors in the side of the furnce, which would allow access. The 3 Hebrew men & the fourth figure can be seen in the flames at the centre of the furnace.

Verse 25 says: “Look!” Nebuchadnezzar shouted. “I see four men, unbound, walking around in the fire. They aren’t even hurt by the flames! And the fourth looks like a divine being!” Other translations state: “…looks like a son of the gods.” What or who did King Nebuchadnezzar see – the mysterious fourth person in the furnace? Some suggest that it was an angel sent from God in heaven, to save the 3 Hebrew men. Other commentators have suggested that the fourth figure could have been the preincarnate Jesus Christ. Whether you believe the figure to have been a preincarnate Christ, or some other heavenly being, the fact remains that the 3 Hebrew men were thrown into the fiery furnace & miraculously saved from the flames. As – J. Vernon McGee’s “Thru the Bible” puts it: ‘The preservation of these faithful few in the fiery furnace was miraculous. There is no other explanation — you either accept that or reject it. Either the Book of Daniel is misrepresenting things, or it is telling the truth.’ 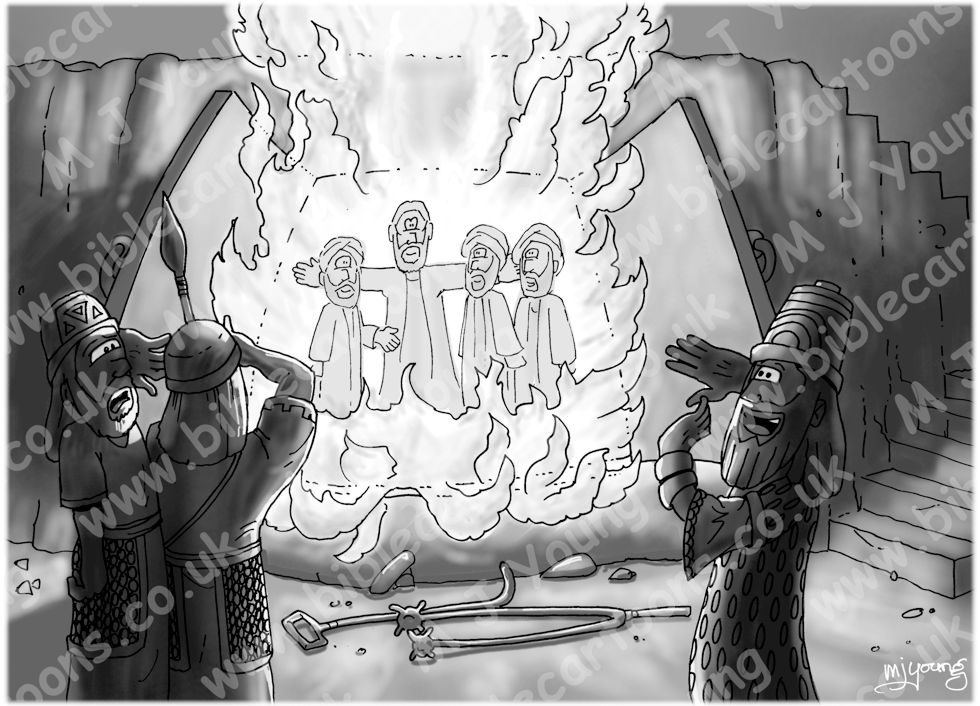 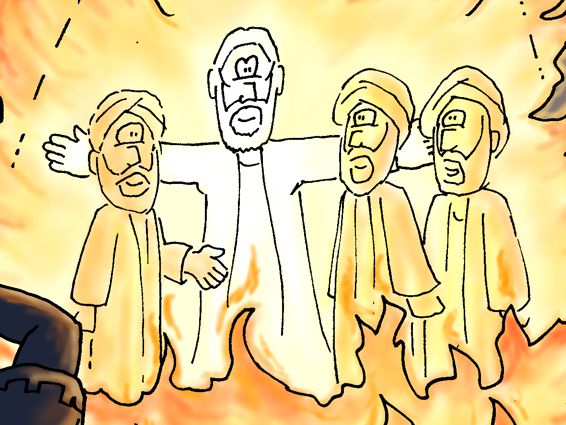