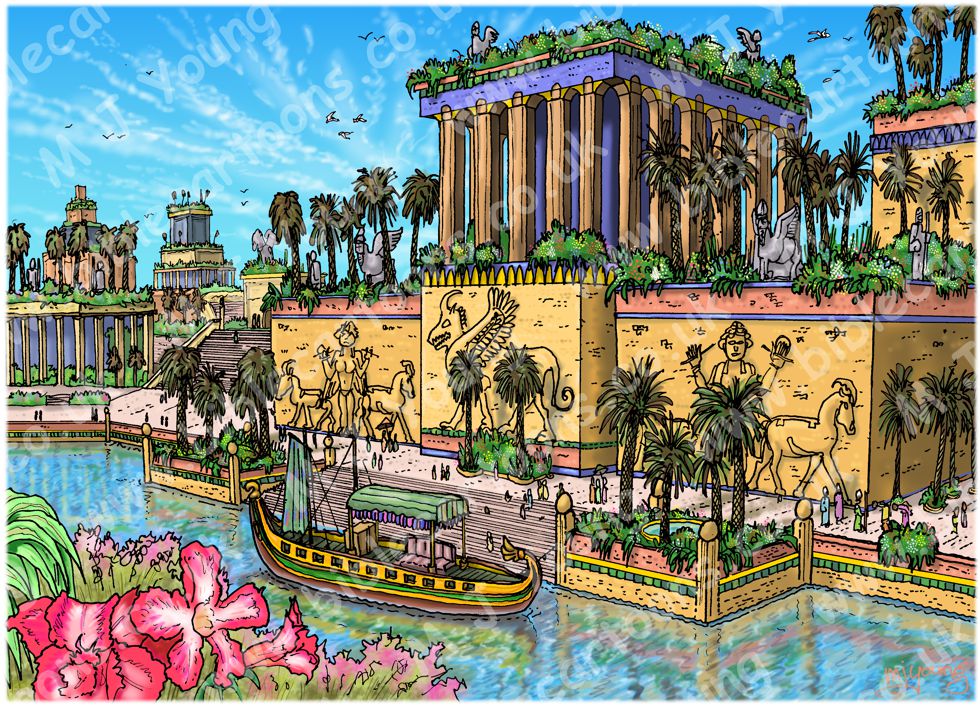 Daniel 1:2 (NLT)
[The Lord gave him [King Nebuchadnezzar] victory over King Jehoiakim of Judah.] When Nebuchadnezzar returned to Babylon, [he took with him some of the sacred objects from the Temple of God and placed them in the treasure-house of his god in the land of Babylonia. [1]]

RESEARCH/ADDITIONAL NOTES:
This scene started out as an ink sketch, which can be seen on the top right hand corner of the “Map of Middle East showing Babylon” (see Maps section). I have decided to produce a full size design, which shows the splendour of the city and its famous hanging gardens. There is a lot of detail in this scene, which took a number of hours to ink in, and many more to colour up. I was keen to include bright coloured ceramic tiles on the walls which adds to the sense of opulence.

The carved stone figures on the walls of the building are based on reference photographs I found on the internet. The female figure is based on a clay relief figure called “Queen of the Night (Babylon)”, found in the British Museum. The nude woman has feathery wings and bird’s feet, with 4 sets of horns in her headdress. I have also included other popular imagery on the walls of some buildings used by the Babylonian artists, including lions and oxen.

Babylon was built on the banks of the mighty Euphrates river, the longest and one of the most historically important rivers of Western Asia. I have decide to add a richly ornamented wooden boat in the foreground, moored near some steps, that lead into the city.

The bright pink flower I the left foreground is Adenium obesum (aka Desert Rose, Mock Azalea, Adenium, Impala Lily, Kudu, Sabi Star & Dwarf Bottle Tree). Adenium is a succulent plant in the Apocynum (Dogbane) family, and is native to the Arabian Peninsula, although it can be found in lots of other countries too. Adenium can grow to 3.3–9.8 feet (1–3 metres) in height. The flowers are tubular, 0.79–1.97 inches (2–5 cm) long, with the outer portion 1.6–2.4 inches (4–6 cm) diameter with five petals. The flowers tend towards red and pink, often with a whitish blush outward of the throat.

The green plant with feathery, pink blossom (behind the Adenium) is Tamarisk (aka Saltcedar and Tamarix) which is a graceful, hardy evergreen or deciduous shrub or tree which grows to 3.3–59.1 feet (1–18 metres) in height and forms dense thickets. Native to drier areas of Eurasia and Africa, Tamarisk usually grows on saline soils, and can also tolerate alkaline conditions. Its distinct feathery pale pink flowers make this very invasive plant appear harmless, however, it is often blamed for increasing the number of wildfires in a region and negatively altering wildlife habitats.