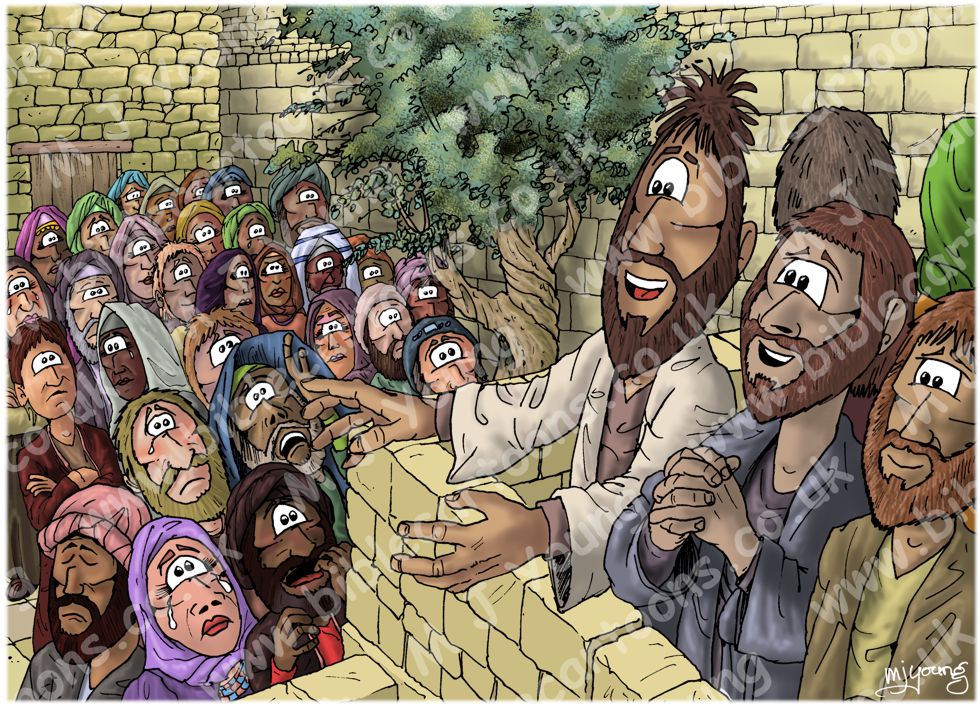 Acts 2:37-40 (NLT)
37 Peter’s words convicted them deeply, and they said to him and to the other apostles, “Brothers, what should we do?”
38 Peter replied, “Each of you must turn from your sins and turn to God, and be baptized in the name of Jesus Christ for the forgiveness of your sins. Then you will receive the gift of the Holy Spirit. 39 This promise is to you and to your children, and even to the Gentiles [7] —all who have been called by the Lord our God.” 40 Then Peter continued preaching for a long time, strongly urging all his listeners, “Save yourselves from this generation that has gone astray!”

LIGHTING NOTES:
There is simple, one directional lighting in this scene, coming from the early morning sunshine. The viewers perspective has changed from the previous scene – now we are by the side of the Apostles, looking down towards the crowd. Therefore the sun is in the east which is to the left of the scene. The sunshine is getting stronger & yellower as it breaks through the storm clouds.

CHARACTERS PRESENT:
In the foreground, from left to right: Simon/Peter, Andrew (Simon/Peter’s brother), with the back of Matthew/Levi behind him, James (son of Zebedee), with the un-named female disciple in green head scarf, behind him.
In the background, there are various people in the crowd, listening to Simon/Peter & the apostles.

RESEARCH/ADDITIONAL NOTES:
I have created two versions of this scene, this is the “Colour version”, which concentrates on maximising the colour of the figure’s clothing & surroundings. The next cartoon (called the “Sunlight version”) focuses on tonal contrast, with a blue (shadow) colour cast over the crowd, whilst the background wall, tree & Apostles have a strong yellow (sunlight) colour over them.

Three of the people listening in the crowd also appear in a previous scene, Acts 02 – Pentecost – Scene 07 – Ridicule. They are at the front of the crowd:
1) The man in red/brown, who’s hand gestures indicated that he believed the apostles/disciples have been drinking. In this scene he is looking terrified & worried.
2) The man in grey/blue, who’s hand gestures indicated that he believed the apostles/disciples were mad! In this scene he is walking off to the left, with eyes closed, clearly unconvinced by the apostle’s words.
3) The young (unbearded) man in brown has his arms folded & is listening to what is being said.
These three men represent the three conditions everyone can experience when listening to someone talk about the gospel of Jesus the Christ: 1) conviction & acceptance, 2) disagreement & rejection, & 3) “sitting on the fence” or simply undecided, waiting to hear more.

The crowd’s various facial expressions.
I have deliberately shown a variety of reactions to the apostle’s words, on the faces of the people in the crowd. Some people are smiling (accepting of the message), some are looking interested, some are looking bemused, whilst others are neutral, or hostile to the words being spoken.
Any of the listening crowd in my cartoon illustration who has tears in his/her eyes is indicative of deep conviction at hearing the words of Simon/Peter & the other apostles.
There is a particularly strong conviction in the man who has pulled a blue cloth over his head, now there’s strong conviction!