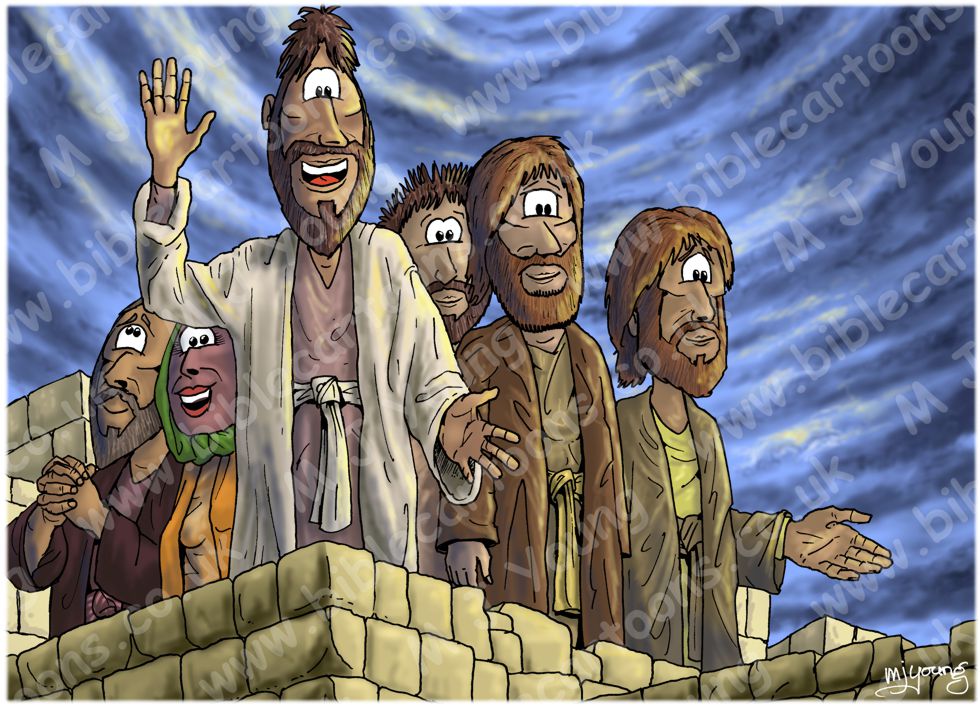 Acts 2:14-36 (NLT)
Peter preaches to a crowd
14 Then Peter stepped forward with the eleven other apostles and shouted to the crowd, “Listen carefully, all of you, fellow Jews and residents of Jerusalem! Make no mistake about this. 15 Some of you are saying these people are drunk. It isn’t true! It’s much too early for that. People don’t get drunk by nine o’clock in the morning. 16 No, what you see this morning was predicted centuries ago by the prophet Joel:

17 `In the last days, God said,
I will pour out my Spirit upon all people. Your sons and daughters will prophesy, your young men will see visions, and your old men will dream dreams.

18 In those days I will pour out my Spirit upon all my servants, men and women alike, and they will prophesy.

19 And I will cause wonders in the heavens above and signs on the earth below—
blood and fire and clouds of smoke.

20 The sun will be turned into darkness,
and the moon will turn bloodred,
before that great and glorious day of the Lord arrives.

22 “People of Israel, listen! God publicly endorsed Jesus of Nazareth by doing wonderful miracles, wonders, and signs through him, as you well know. 23 But you followed God’s prearranged plan. With the help of lawless Gentiles, you nailed him to the cross and murdered him. 24 However, God released him from the horrors of death and raised him back to life again, for death could not keep him in its grip. 25 King David said this about him:

`I know the Lord is always with me.
I will not be shaken, for he is right beside me.

26 No wonder my heart is filled with joy,
and my mouth shouts his praises!
My body rests in hope.

27 For you will not leave my soul among the dead [4] or allow your Holy One to rot in the grave.

28 You have shown me the way of life,
and you will give me wonderful joy in your presence.’ [5]

29 “Dear brothers, think about this! David wasn’t referring to himself when he spoke these words I have quoted, for he died and was buried, and his tomb is still here among us. 30 But he was a prophet, and he knew God had promised with an oath that one of David’s own descendants would sit on David’s throne as the Messiah. 31 David was looking into the future and predicting the Messiah’s resurrection. He was saying that the Messiah would not be left among the dead and that his body would not rot in the grave.

32 “This prophecy was speaking of Jesus, whom God raised from the dead, and we all are witnesses of this. 33 Now he sits on the throne of highest honour in heaven, at God’s right hand. And the Father, as he had promised, gave him the Holy Spirit to pour out upon us, just as you see and hear today. 34 For David himself never ascended into heaven, yet he said,

`The LORD said to my Lord,
Sit in honour at my right hand

35 until I humble your enemies,
making them a footstool under your feet.’ [6]

36 So let it be clearly known by everyone in Israel that God has made this Jesus whom you crucified to be both Lord and Messiah!”

RESEARCH/ADDITIONAL NOTES:
This scene is a close-up of Simon/Peter & some of the other disciples, on a rooftop.

We can see Simon/Peter delivering his speech (to the gathered crowd below the building.)
Simon/Peter was a fisherman, so public speaking was probably not a natural skill he had! But here he was inspired by the Holy Spirit & able to deliver words which we know deeply affected many people. Verse 41 tells us that about 3,000 people became Christian believers as a direct result of this speech & the wonder of hearing the apostles speaking in many different languages. Clearly the Lord God was bringing people into the newly emerging Christian church at this time.