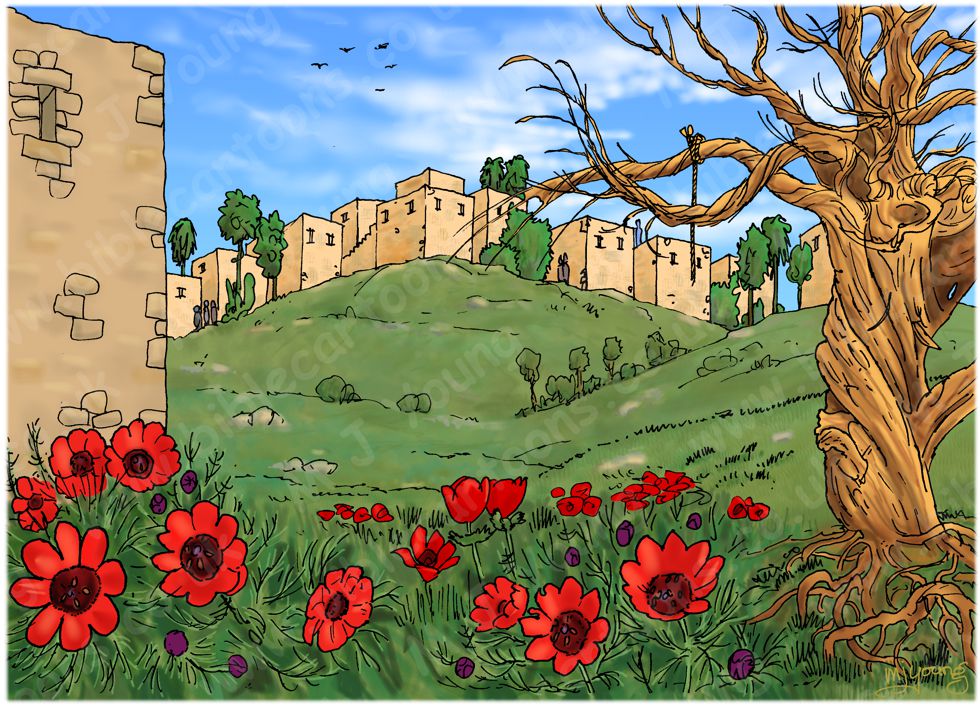 Acts 1:18-20 (ANIV)
18 (With the reward he got for his wickedness, Judas bought a field; there he fell headlong, his body burst open and all his intestines spilled out. 19 Everyone in Jerusalem heard about this, so they called that field in their language Akeldama, that is, Field of Blood.)
20 “For,” said Peter, “it is written in the Book of Psalms,

LIGHTING NOTES:
The sun (unseen, above right) illuminates this scene, casting shadows to the left of objects.

CHARACTERS PRESENT:
None. There a few un-named figures near the houses in the distance.

RESEARCH/ADDITIONAL NOTES:
This scene shows the field that was bought by the Jewish chief priests & leaders, with the 30 pieces of silver they gave to Judas Iscariot to betray Jesus.

Matthew 27:6-8 (NIV)
6 The chief priests picked up the coins and said, “It is against the law to put this into the treasury, since it is blood money.” 7 So they decided to use the money to buy the potter’s field as a burial place for foreigners. 8 That is why it has been called the Field of Blood to this day. 9 Then what was spoken by Jeremiah the prophet was fulfilled: “They took the thirty pieces of silver, the price set on him by the people of Israel, 10 and they used them to buy the potter’s field, as the Lord commanded me.” [See Zechariah 11:12,13; Jeramiah 19:1-13; 32:6-9.]

The field is called Akeldama (Aramaic), which is in Jerusalem’s Hinnom Valley, oddly enough it is a picturesque setting whose infamous history includes child sacrifice in fire causing it to be identified with the hell of unquenchable fire and punishment.

In the foreground is Adonis palaestina (aka Palestine Pheasant’s Eye), an bright red annual flower in the family Ranunculaceae, that grows in the Mediterranean Woodlands and Shrublands & Semi-steppe shrublands of Israel. It flowers in February to April. The plant grow to 10–40 centimetres (3.9–15.7 in) in height, with feathery, finely divided leaves.
Derivation of the botanical name:
Adonis, “god of plants”, the Greek classical name; in Greek legend Adonis was a beautiful youth loved by both Aphrodite and Persephone “when Adonis died Zeus decreed that he should spend winters in the underworld with Persephone and spend summers with Aphrodite” Then, it came to pass that a boar killed Adonis. Upon learning the news, Aphrodite shed as many tears as the blood drops that had fallen from Adonis’s body. A rose bush grew from each one of Aphrodite’s tears, and a plant of that name from each drop of blood.
palaestina, Palestine, Eretz-Israel, Israel.

Behind the Adonis palaestina is a carpet of Anemone coronaria (aka Crown anemone, windflower, Poppy anemone), another bright red flowering plant (although there are light blue, pink, purple, violet & white varieties too), that grows 15-45 cm (5.9-17.7 in) high. It flowers December to April, and can be found in all 5 of the climatic zones of Israel: Mediterranean Woodlands and Shrublands, Semi-steppe shrublands, Shrub-steppes, Deserts and extreme deserts, Montane vegetation of Mt. Hermon.
Derivation of the botanical name:
Anemone, anemos (Greek), “wind”. In Greek mythology, Anemone was the name of the daughter of the winds.
coronaria, corona (Latin), “crown”; coronaria, used for garlands, or pertaining for garlands.