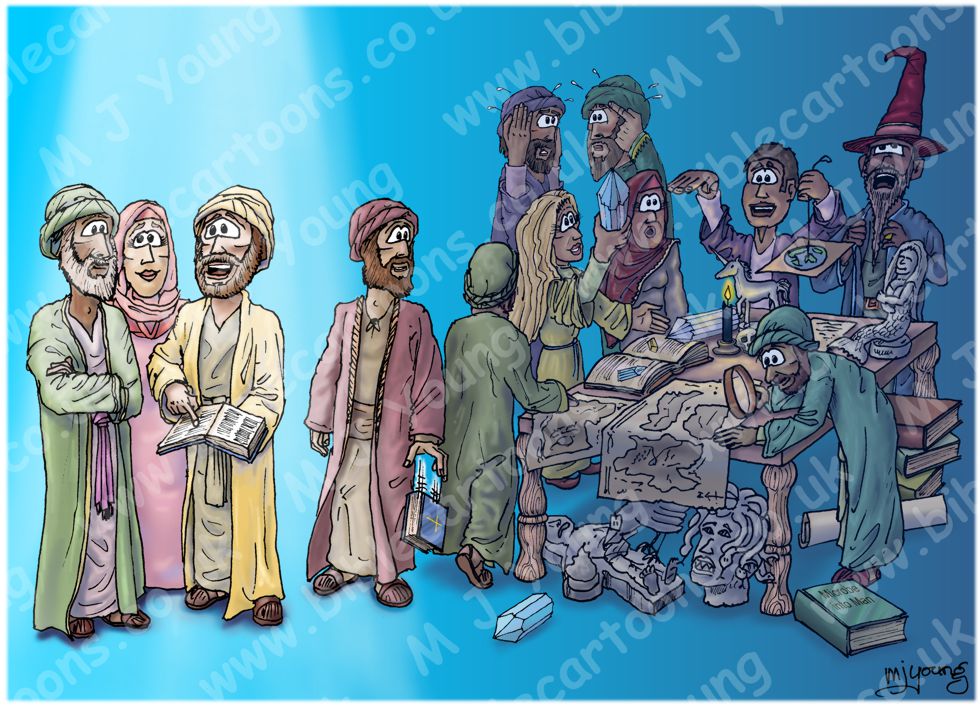 2 Timothy 4:1-5 (ANIV)
1 In the presence of God and of Christ Jesus, who will judge the living and the dead, and in view of his appearing and his kingdom, I give you this charge: 2 Preach the Word; be prepared in season and out of season; correct, rebuke and encourage—with great patience and careful instruction. 3 For the time will come when men will not put up with sound doctrine. Instead, to suit their own desires, they will gather around them a great number of teachers to say what their itching ears want to hear. 4 They will turn their ears away from the truth and turn aside to myths. 5 But you, keep your head in all situations, endure hardship, do the work of an evangelist, discharge all the duties of your ministry.

CHARACTERS PRESENT:
Un-named people. On the left there is a Christian man (with Bible in hand) & woman talking to a man on the extreme left of the scene. There is a man turning away (figuratively representing someone turning away from Christianity) the remaining people around the table represent people who are intrigued & absorbed in all kinds of myths, magic & distractions.

This is a visual representation of verses 3 & 4. The scene should be “read” from left to right. On the left there is a Christian man (with Bible in hand) & woman talking to a man who stands on the extreme left of the scene. He represents someone who is interested in hearing the Gospel of Jesus the Christ, but who is not yet a believer.
Although I have the Christian man holding a Bible, the book of the Bible didn’t actually exist at this early time in church history. Nevertheless I have illustrated the man holding a Bible (in bound book form), as a symbolic reference to his faith: the easiest way to visually identify a Christian in my work is to have a person carry a Bible, even if they didn’t exist yet!

Next to these three people you can see a man who’s head is turned towards the figures by the table. He represents someone turning away from Christianity towards myths (verse 4). The remaining people around the table represent those who are intrigued & absorbed in all kinds of myths, magic & distractions from Christianity. Some are onlookers, & some are the “great number of teachers” mentioned in verse 3, “saying what their itching ears want to hear.”

I have tried to represent the “myths” in verse 4 in a number of different ways, listed below:

01) Under the table there is a statuette of Prometheus, who is a character from Greek mythology. He stole fire from the gods & gave it to mankind. For his trouble he was chained to a rock by the chief god Zeus, where an eagle ate his eternally replenished liver every day.

02) Also under the table is a statuette of the snake haired Medusa. In Greek mythology Medusa was a Gorgon (a type of monster) described as having the face of a human woman, but with living venomous snakes in place of her hair. Gazing into her eyes would petrify onlookers (turn them to stone.)

03) There are 3 crystals in the scene, one on the ground, one on the table & held by a blonde woman. Crystals have been attributed with all sorts of powers, through history.

04) On the ground are a variety of scrolls, maps & books. Only the green book, in the foreground has a title that can be seen: “Microbes to men”. The book represents all the ideas about evolution from simple life (single celled) to complex life; from one form developing into another, leading to mankind.

05) The man in green & holding a magnifying glass is studying various maps. He is looking for Atlantis, a fabled island in the Atlantic that according to legend sank beneath the sea.

06) On the table is a black candle & a skull, which represents the dark arts of magic, the occult, Satanism, etc.

07) There are two other statues (on the table) one of a unicorn & one of a mermaid. The unicorn is a mythical animal generally depicted with the body and head of a horse, the hind legs of a stag, the tail of a lion, and a single horn in the middle of the forehead. A mermaid is a fabled marine creature with the head and upper body of a woman and the tail of a fish.

08) Behind the mermaid statue is a man wearing a pointed red hat & looking like he is lecturing anyone who will listen! He represents people interested in magic (witches, wizards, warlocks, etc) & who practice these dark arts.

09) To the left of the “wizard” is a flat earth proponent: even today there are people who don’t believe the Earth is a sphere in shape, but that it is flat. The man is holding up a string, which suspends a flat map of the earth. He is holding his right hand up (flat, of course!) & is trying to convince anyone who will listen about his idea.

10) Behind everybody else there are two men looking intently at each other, both with there hands on their heads. They are trying to read each other’s minds using telepathy (communication from one mind to another by extrasensory means.)

I’m sure I could have represented many more myths, legends, philosophies & ideas than these. There are plenty about, & always have been. Ultimately all these things have one thing in common: they are deliberately postulated & made popular with the express (satanic) purpose of drawing people away from “sound doctrine” (verse 3.) For a definition of doctrine, read my note below [1].

There appears to be a process of falling away from sound doctrine, represented by the progression of verses 3-4 above:
3 For the time will come when men will not put up with sound doctrine. Instead, to suit their own desires, they will gather around them a great number of teachers to say what their itching ears want to hear. 4 They will turn their ears away from the truth and turn aside to myths.

The process appears to start with dis-satisfaction with the sound doctrine found in the Holy Bible. People who are in danger of abandoning their Christian faith become discontent; already “their own desires” are at work within them, & the saving power & life-giving Word of God (the Holy Bible) is “not enough” for such people. Instead of reading the Bible & putting it’s truth to work in their lives, such people become enamoured with some other “truth”, be that crystal healing, magic, occult practices, New Age philosophy, or any number of other ideas. Then “they gather around them a great number of teachers to say what their itching ears want to hear.” If someone rejects the message of Jesus, they will always want to replace the real Truth, with a lot of other “truth” to drown out the Holy Spirit’s insistent voice, calling them to repentance.

The fact is that there is no other way to heaven/God the Father than through Jesus the Christ. That’s what the sound doctrine of the Bible points out. There is no other “truth” than the revealed Truth of the Holy Bible. 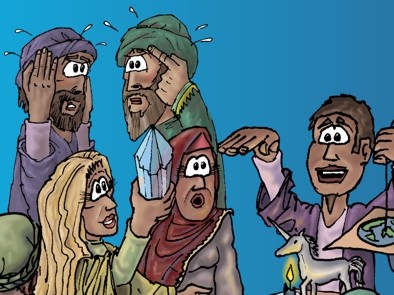 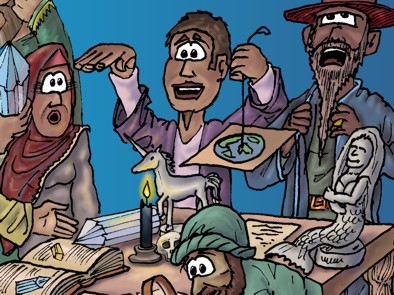 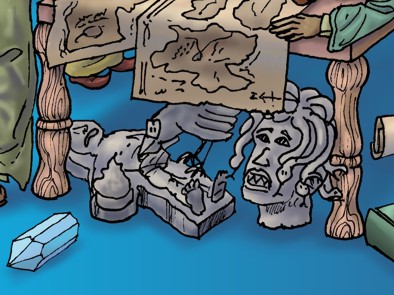 2 Timothy 04 – Faithful Preaching – Scene 03 – Turning to myths – PARTIAL 03
Close-up of Prometheus chained to a rock where an eagle ate his eternally replenished liver every day & the snake haired Medusa statues.

[1]
What is doctrine?
“Doctrine is indispensable to Christianity. Christianity does not exist without it. The New Testament repeatedly emphasizes the value and importance of sound doctrine, sound instruction ( 1 Tim 6:3 ), and a pattern of sound teaching ( 2 Tim 1:13-14 ). The apostles defended the faithful proclamation of the gospel ( Gal 1:8 ). They formulated Christian faith in doctrinal terms, then called for its preservation. They were adamant about the protection, appropriation, and propagation of doctrine because it contained the truth about Jesus Christ. Knowing the truth was and is the only way that a person can come to faith. So the apostles delivered a body of theological truth to the church ( 1 Cor 15:3 ). They encouraged believers to be faithful to that body of information they had heard and received in the beginning ( 1 John 2:7 1 John 2:24 1 John 2:26 ; 3:11 ), that “faith that was once for all entrusted to the saints’‘ (Jude 3). Believers, in general, were instructed to guard the faith, that is, to stand firm in sound doctrine ( 2 Tim 1:13-14 ). Pastors in particular were admonished to cleave to sound doctrine so that they could be good ministers of the gospel ( 1 Tim 4:6 ).”

This is part of a definition of doctrine that I found online.
[Source: http://www.biblestudytools.com/dictionary/doctrine/]

View all Bible Cartoons in 2 Timothy Go to Search by Bible Book page Do I need High or Medium qlty cartoons? FAQ’s