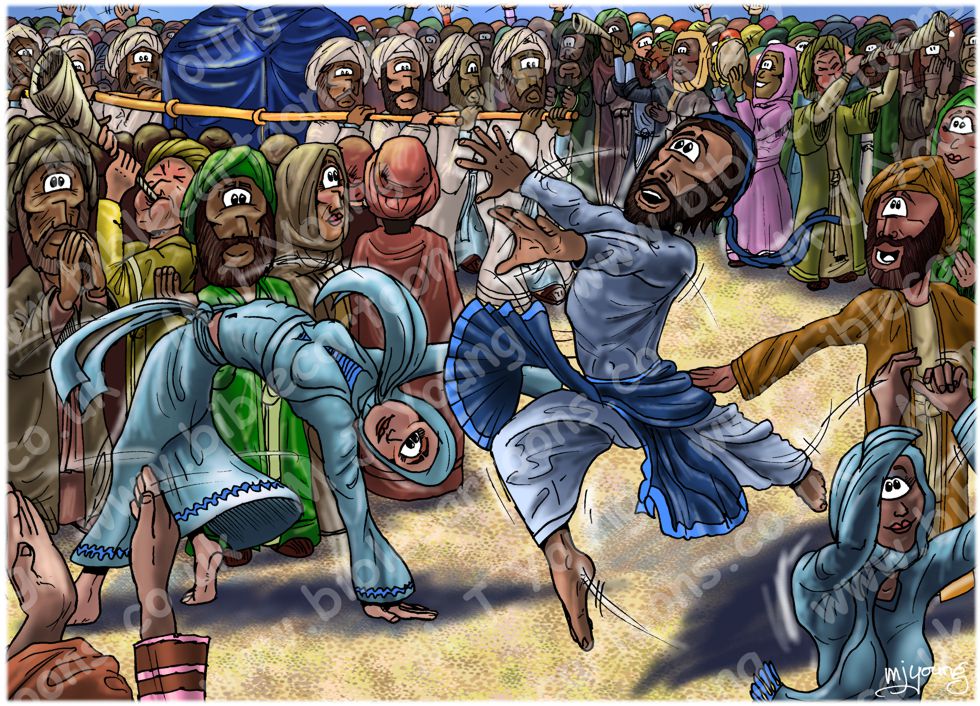 2 Samuel 6:14-15 (ANIV)
14 David, wearing a linen ephod, danced before the Lord with all his might, 15 while he and the entire house of Israel brought up the ark of the Lord with shouts and the sound of trumpets.

TIME OF DAY:
Unspecified in the scripture, so i have set it as mid morning.

LIGHTING NOTES:
The sun (above & left) lights the scene.

CHARACTERS PRESENT:
King David can be seen leaping & “danced before the Lord with all his might” in right foreground.
Two women wearing blue costumes, one of which is performing acrobatics on the left.
There are 8 men wearing pale costumes & carrying the Ark of the Covenant on 2 long gold poles. The Ark (which was made of Acacia wood & overlain with gold) has a blue cover over it.
Many Hebrew people are present in the crowd that lines this street scene.
Notice the woman in the background who is wearing pink & playing a tambourine. Notice alos three men blowing ram’s horn trumpets in the crowd.

RESEARCH/ADDITIONAL NOTES:
This was a complicated scene to draw, due to the great number of figures of present & the action poises I wanted to achieve, particularly of King David & the women dancers. I found some useful photographic reference on the internet that greatly helped me there.

This is the first cartoon illustration I have drawn for the second book of Samuel.


Bible Doctrine Notes
6:14-23 PRAYER, Worship (5.55A)
The Bible tells us that David and others celebrated “with all their might” (verse 5 and verse 14). This was no half-hearted thing: worship is not casual or incidental; it involves the whole being. Musical instruments may be used as well, as a means of thanksgiving to God.
To enter David’s own city, trumpets (normally used for announcements) were used to worship. The burnt offerings were required, whilst the fellowship offerings were voluntary. Blessing the people was normally a priestly function, but here David blessed them as God’s anointed leader.
Michal saw David’s dance as being “in the sight of the slave girls”, whereas David saw it as “before the Lord” – two quite different interpretations of the same events.