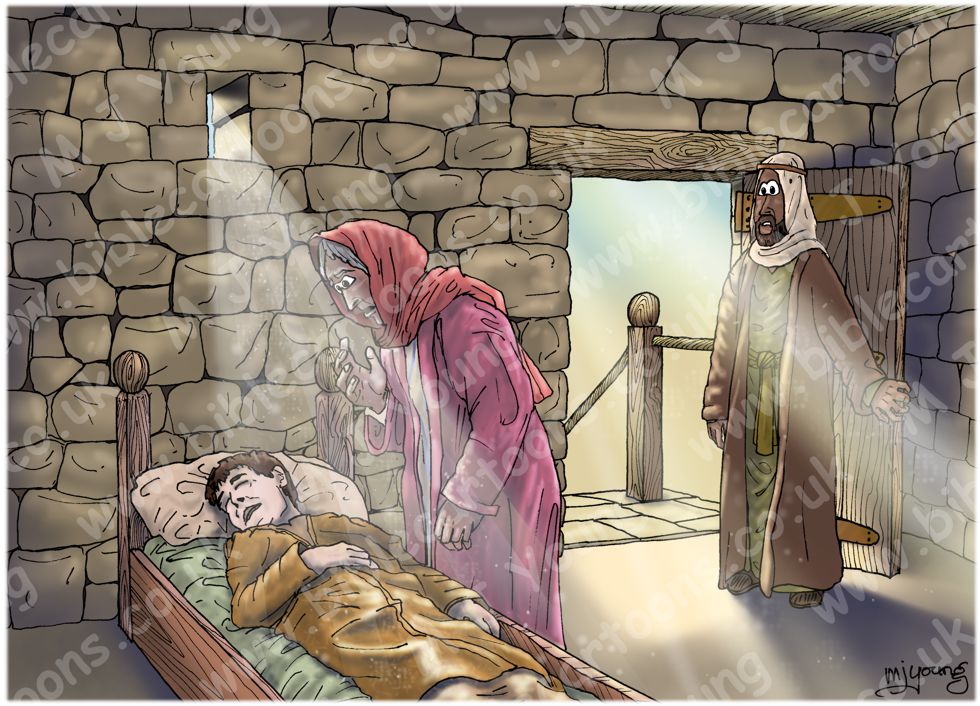 2 Kings 4:20-21a (ANIV)
After the servant had lifted him [the Shunammite woman’s son] up and carried him to his mother, the boy sat on her lap until noon, and then he died. 21 She went up and laid him on the bed of the man of God, [then shut the door and went out.]

TIME OF DAY:
Not specified in Bible verses, I have made it mid day. Just a few minutes after the previous scene.

LIGHTING NOTES:
The sun is overhead, casting shadows below people & objects.
Light is streaming in through the high, narrow window.

CHARACTERS PRESENT:
From left to right: The Shunammite woman’s son dead, on Elisha’s bed in the upper room, the Shunammite woman (in pink), a servant (the same one who carried the ill son from the fields on the donkey in the previous scene.)

RESEARCH/ADDITIONAL NOTES:
The boy who had just died in his mother’s arms has been carried up & placed by his mother onto the bed in Elisha’s room, which is situated on top of the Shunammite couple’s home. Notice the boy’s eyes are closed & he has a deathly pale skin colour which illustrates his condition.

This scene is quite sad, but fortunately the Lord uses Elisha to bring the boy back to life, later in the story.

The servant standing in the door is the same one who the boy’s father tasked with carrying him back to his mother in the village/town of Shunam (see previous scene.)

I enjoyed drawing the dust motes & sun’s rays coming in through the door & window (see below.) Windows in ancient buildings were often small, allowing only a little light in, & providing ventilation. The use of small windows was a method of excluding thieves! 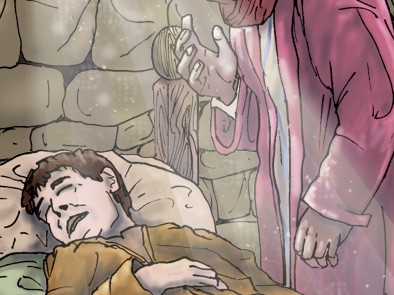 Close-up of dust motes in the sunlight