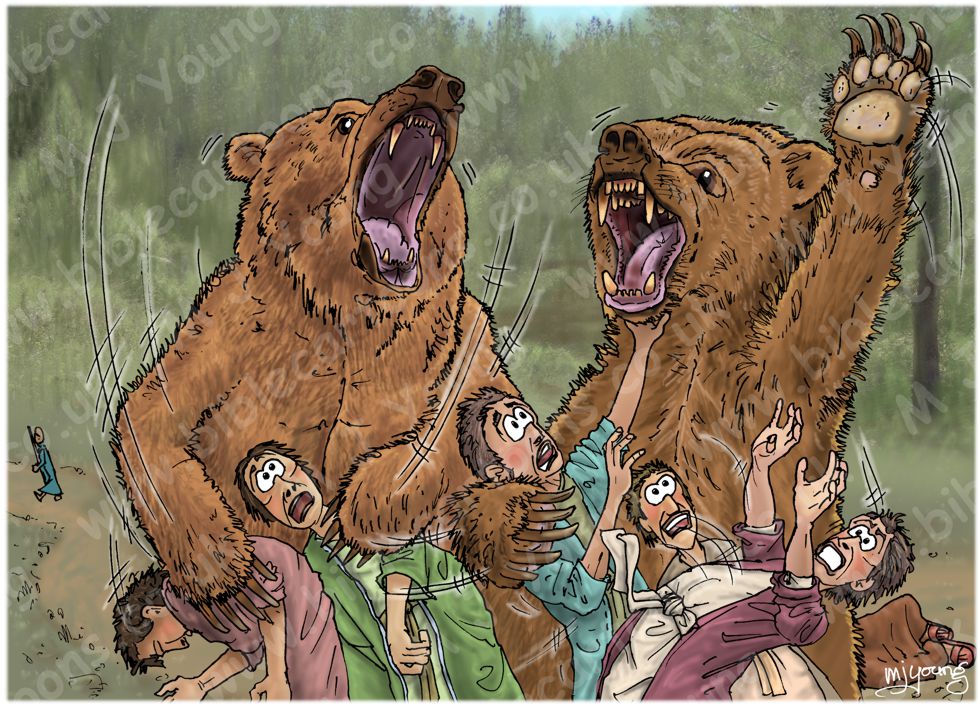 2 Kings 2:23-24 (NLT)
23 Elisha left Jericho and went up to Bethel. As he was walking along the road, a group of boys from the town began mocking and making fun of him. “Go away, baldy!” they chanted. “Go away, baldy!” 24 Elisha turned around and looked at them, and he cursed them in the name of the Lord. Then two bears came out of the woods and mauled forty-two of them.

CHARACTERS PRESENT:
Elisha walking away in the distance, two bears, a group of boys.

RESEARCH/ADDITIONAL NOTES:
I designed this scene some years ago but never got round to completing it. At last, I have! It is quite a shocking scene and unexpected… that a man of God might curse some children for calling him names.

A note about Elisha
We first encounter Elisha in 1 Kings 19, where Elijah is commanded to anoint him as his successor. Elisha accepted this call to become a prophet, which was some 7-8 years before the scene above: where Elijah was parted from him and taken up into heaven. Interestingly, during all these preceding years we read nothing of Elisha’s exploits. After Elijah is taken into heaven, Elisha was accepted as the leader of the Hebrew prophets & many amazing miracles & signs & wonders are recorded in the rest of Elisha’s life. It seems that Elisha did indeed inherit “a double portion” of Elijah’s spirit (2 Kings 2:9); & held the office of “prophet in Israel” for about sixty years (892-832 B.C.)


Bible Doctrine Notes
2:23-25 MIRACLE, Judgement (2.22E)
The bears came out of the woods after Elisha cursed the youths “in the name of the Lord”. To some this brief description of judgement on the disrespectful youths appears unduly harsh. Most miracles are redemptive in nature, rather than judgements.

2:24 PRAYER, Curse (5.55C)
All prayer must reflect the mind of God. If a blessing is possible, then so is a curse. God had said that He would curse anyone who cursed Abraham (see Genesis 12:3). The outworking of God’s kingdom depends on the strictures, guidance and care He places around His chosen instruments. Apostasy (the abandonment or renunciation of a religious belief or principle) had not been eliminated by Elijah’s ministry in the Northern Kingdom, prior to Elisha’s ministry beginning. Elisha showed the strong hand of God in judgement. Curse was the outworking of the covenant against disobedience (see Leviticus 26; Deuteronomy 26-28).