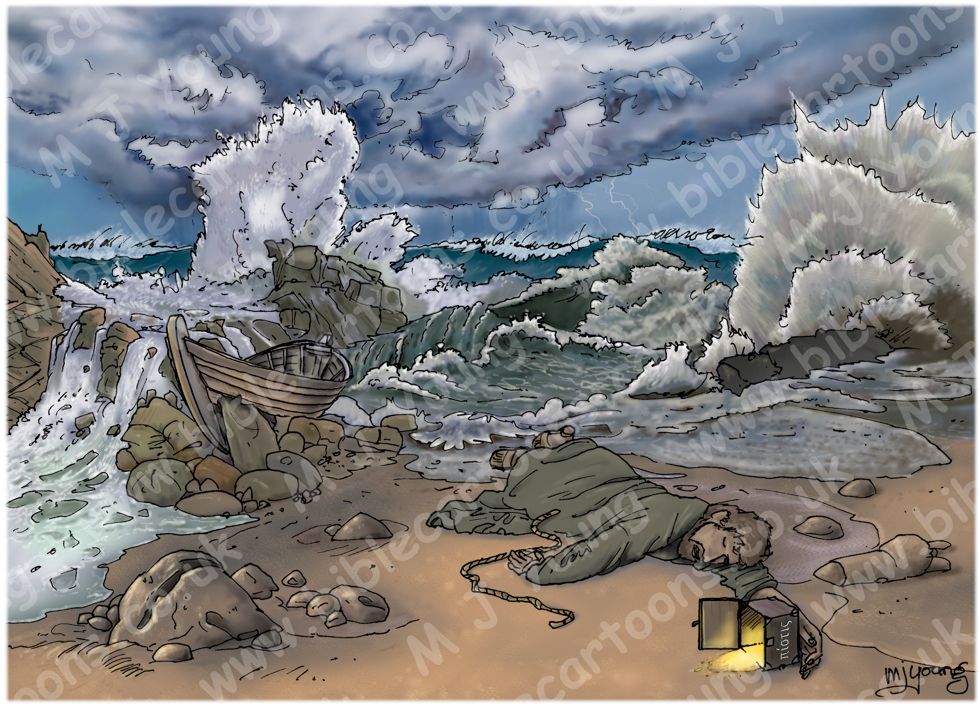 1 Timothy 1:18-20 (ANIV)
18 Timothy, my son, I give you this instruction in keeping with the prophecies once made about you, so that by following them you may fight the good fight, 19 holding on to faith and a good conscience. Some have rejected these and so have shipwrecked their faith. 20 Among them are Hymenaeus and Alexander, whom I have handed over to Satan to be taught not to blaspheme.

LIGHTING NOTES:
The sun is obscured by storm clouds, making this a dark scene. Nevertheless there is sunlight filtering down on the scene from above. Lightning illuminates the middle horizon. There is a warm secondary light off to the left which gently bathes the foreground in golden yellows. The chest or box also produces a yellow gold glow.

CHARACTERS PRESENT:
An un-named man who has shipwrecked his faith (verse 19).

RESEARCH/ADDITIONAL NOTES:
This is a literal depiction of what the apostle Paul was writing to Timothy regarding “Some have rejected these (faith & a good conscience) and so have shipwrecked their faith.”

Notice the man’s boat (middle left of the scene) has caught on a rock, which has punctured the hull.

I was keen to keep the colours cool (blues, greens, purples) through the sky & sea elements of this scene. I have deliberately made the man & his boat similar colours to the surroundings, so that they blend in with the raging storm hues & do not stand out from the background very prominently. The waves & spray hopefully illustrate the power of the storm, their pale hues set against darker sky & sea tones to create high contrast areas. I was also keen to show the contents of the man’s casket or chest radiating a golden glow as it seeps into the sandy beach. The elements of this scene have been carefully placed, to lead the viewer’s eye down to the patch of warm light, before they return to the energetic waves once more.

The man lying on the beach is someone who has “shipwrecked their faith.” If you look closely there is a word written on the side of the casket or chest the man was carrying. The word is written in Greek & says πίστις [1] (Transliterated as pistis) which is the word for faith, & includes the concept of belief, trust, confidence, fidelity, faithfulness. The word carries the meaning of being properly persuaded (come to trust); to have faith.

The man has been shipwrecked, & the precious faith (contained as glowing gold dust or liquid in the casket) is spilling out onto the beach & is disappearing into the sand. How tragic. There is a close-up of the man & casket below. 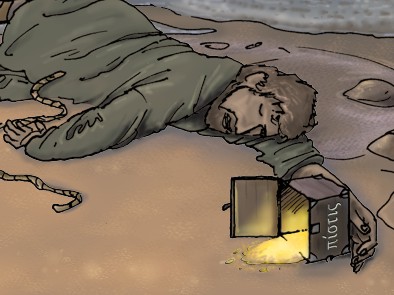 [1]
Faith (4102/pistis) is always a gift from God, and never something that can be produced by people. In short, 4102/pistis (“faith”) for the believer is “God’s divine persuasion“ – and therefore distinct from human belief (confidence), yet involving it. The Lord continuously births faith in the yielded believer so they can know what He prefers, i.e. the persuasion of His will (1 Jn 5:4).

[4102 (pistis) in secular antiquity referred to a guarantee (warranty). In Scripture, faith is God’s warranty, certifying that the revelation He inbirthed will come to pass (His way).
[Source: http://biblehub.com/greek/4102.htm
There is more to read about the definition of faith on this web page.]

View all Bible Cartoons in 1 Timothy Go to Search by Bible Book page Do I need High or Medium qlty cartoons? FAQ’s