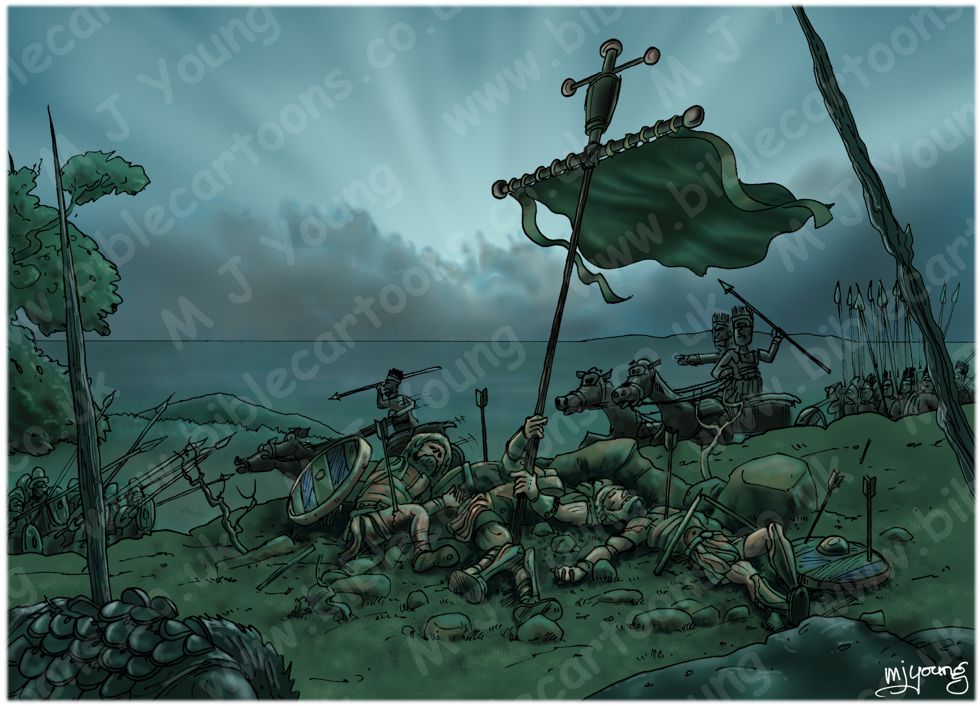 1 Chronicles 10:1-3 (ANIV)
Saul takes his life
1 Now the Philistines fought against Israel; the Israelites fled before them, and many fell slain on Mount Gilboa. 2 The Philistines pressed hard after Saul and his sons, and they killed his sons Jonathan, Abinadab and Malki-Shua. 3 The fighting grew fierce around Saul, and when the archers overtook him, they wounded him.

TIME OF DAY:
There isn’t a time specified in the above verses.

LIGHTING NOTES:
I have used a limited palette (few colours) for this scene, with dark greens & blues dominating. I felt it was right to use dark tones to reflect the sadness of the story of Saul’s death. The dim lighting for the scene comes from the pale sunlight, hidden behind a bank of clouds directly ahead of the viewer.
The cool greens & blues are slightly offset by the introduction of subtle, muted browns & fawns in the wounded/dead figures in the middle of the scene.

CHARACTERS PRESENT:
King Saul & his sons occupy the centre of the scene. Saul has an arrow in his body & is lying on his back to the right of the figures. Saul’s sons are on the left, one of which is still holding Saul’s army banner aloft in his dead hands.

In the background we can see the Hebrew army on the left; their spearmen are desperately trying to rally themselves against 2 Philistine chariots that are bearing down on their position. We can see Philistine spearmen on the far right of the scene.

There is a slain soldier, wearing scale armour in the left foreground.

RESEARCH/ADDITIONAL NOTES:
I am really pleased with the way this scene came out. I particularly like the muted, subdued colours. I have relied on tone (light & shade) to bring some elements to the viewers attention, such as the slain figures of Saul & his sons in the centre of the picture. Deep green shadows & pale, brown highlights focus the viewer’s attention on these central figures, whilst the action of the chariots & armies in the background add interest.
I am also very pleased with the way the clouds & sun’s rays came out.

I am always rather careful about showing violence in my cartoon illustrations. I do not want the subject matter to offend or shock people, particularly younger viewers. However, the scripture verses clearly state that Saul & his sons died at this time, so it was right to illustrate their slain bodies.

I doubt that this will be a popular scene with paying customers (though they may prove me wrong!) since the colours are so subdued & the subject matter isn’t light-hearted, as in many other of my cartoons. On the other hand, death is mentioned quite frequently in the Bible, & some of the deaths are quite graphic!

Where was/is Gilboa?
Giboa means either “boiling spring” (probably suggested by the spring or fountain about half a mile east of the city of Jezreel) or “swollen heap”. Mount Gilboa is really a range of hills or mountains, rather than a single mound. It was on the North Eastern slopes of Gilboa that Saul’s three sons were slain in the battle with the Philistines & on which Saul took his own life by falling on his sword.

Parallel and six miles (10 km) north of the Gilboa range is another, called the hill of Moreh, called by travellers Little Hermon. It was here where the Philistines assembled to fight Saul. Mt. Tabor also lies north (site of the Transfiguration of Jesus), and the mountains of the Jordan Valley. On a clear day from Mount Gilboa it is possible to see Mount Hermon.

The valley of Jezreel lies between Gilboa & the hill of Moreh, which was frequently flooded with rain & quite swampy in the winter. 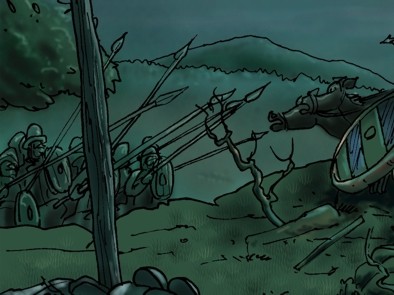 Close-up of the Hebrew army in the left background 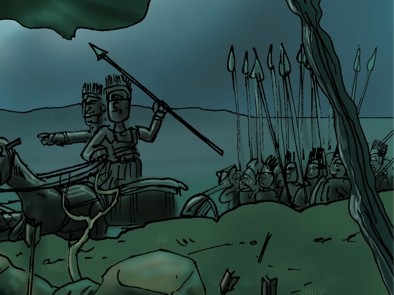 Close-up of the Philistine army in the left background
The Philistine’s had spiky, hairy helmets for their heads apparently! 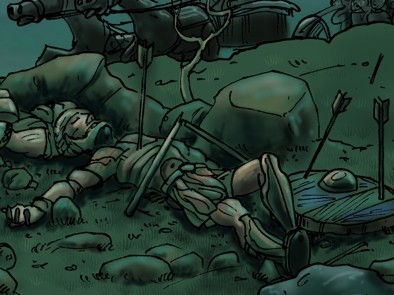 Close-up of King Saul, lying wounded by a Philistine arrow 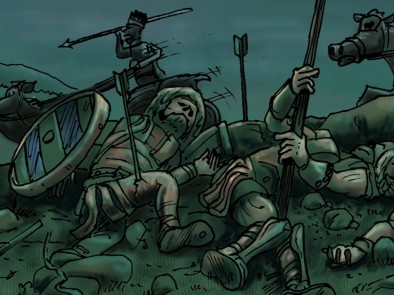 View all Bible Cartoons in 1 Chronicles Go to Search by Bible Book page Do I need High or Medium qlty cartoons? FAQ’s