Yesterday (05/07/2012) I completed my very first cartoon for the New Testament book of Hebrews. It shows five men running in a race, taken from the scripture verse:

Hebrews 12:1 (ANIV)
‘Therefore, since we are surrounded by such a great cloud of witnesses, let us throw off everything that hinders and the sin that so easily entangles, and let us run with perseverance the race marked out for us.’

This cartoon is also the first in my Olympics 2012 Colour Cartoons series.

Note: I have also created a new page in the Freebies section, which has FREE black & white cartoons which viewers can downloaded directly.

All the cartoons with an Olympic theme (both coloured & black & white) will feature subjects like competition, races, running, perseverance, athletics, archery, winning, etc & are specifically designed to help you connect the Bible with the Olympics. Many Christians, churches & Christian organisations will be using the Olympics as a means of evangelising & connecting to people interested in sports & the games in particular. It makes sense for me to draw some cartoons to help us all to do that, with eye-catching action scenes & helpful Bible verses. I hope my cartoons help you in your church’s evangelism efforts during this exciting time.

Here’s a link to the FREE Olympics 2012 black & white cartoon series., there are 10 cartoons there at the moment.
Free Olympics 2012 B/W Cartoon Series

More about my ‘Hebrews 12 – Throw off sin entanglements in the race’ cartoon
In the scene we see two runners tripping over grape vine branches. The two runners behind them are looking worried too! Whilst the runner in front has thrown off the vine branches & is running “straight & true” once more… & looking pleased about it too! Notice that he still has a bit of vine around his wrist: evidence that he too was tangled up.

The story-point of course, is that these running men are just like us, they have been, or are, entangled in the vine & the vine represents ‘everything that hinders and the sin that so easily entangles.’ All sorts of sins (wrong-doing) beset us. Sin is any temptation that we give in to, which takes us away from the Lord God.

I found some photographs on the internet of marathon race runners & people falling over which helped me to compose this scene. Action scenes like this one, are quite difficult to draw, since they involve hands, feet, limbs & heads in all sorts of different poses. Drawing from my imagination is a lot easier with some action photo’ reference to guide me!

Initially I was going to use brambles (blackberry) bushes. If you’ve ever been blackberry picking you’ll know just how prickly & entangling those plants can be! I decided to use grape vines in the end though, as these were & are very common plants in the Holy Lands. And let’s face it, wine & alcohol can be quite a sin entanglement for some of us, so that plant is doubly representative of the ‘sin that so easily entangles’! Not that I am against alcohol & drinking, just in moderation. I think the Bible shows us that drinking to excess can lead to personal compromise… just look at what happened to poor old Lot (see Genesis 19:30-38) & Noah (Genesis 9:20-23.)

Anyway, below is the finished cartoon. 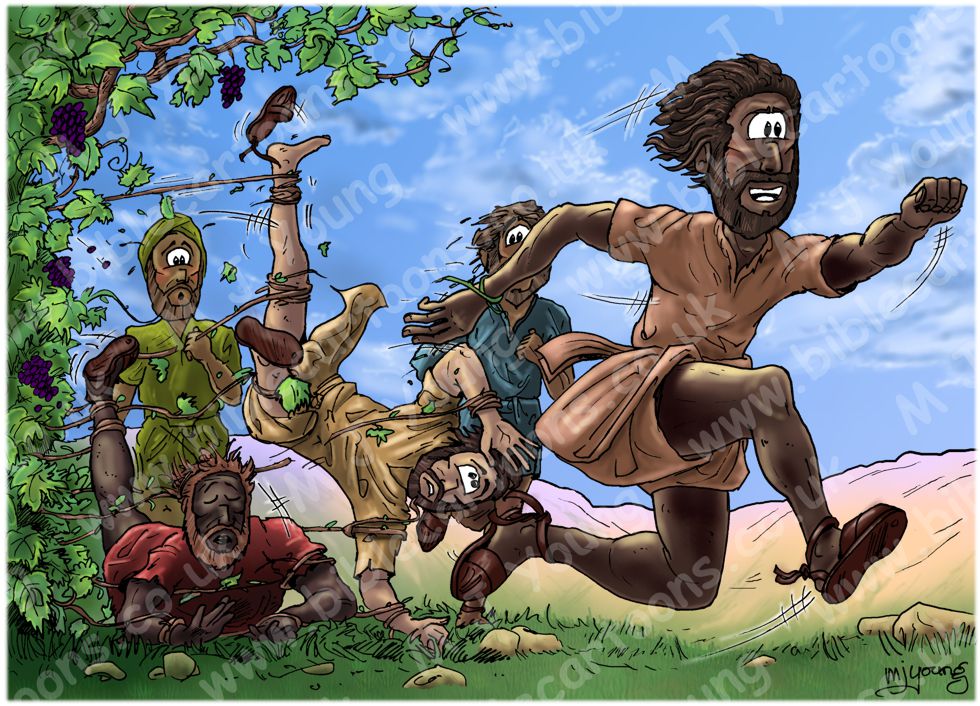 Hebrews 12 – Throw off sin entanglements in the race

Follow this link to see this Bible Cartoon on the BC Gallery page, with download & purchase options:
Bible Cartoon: Hebrews 12 – Throw off sin entanglements in the race