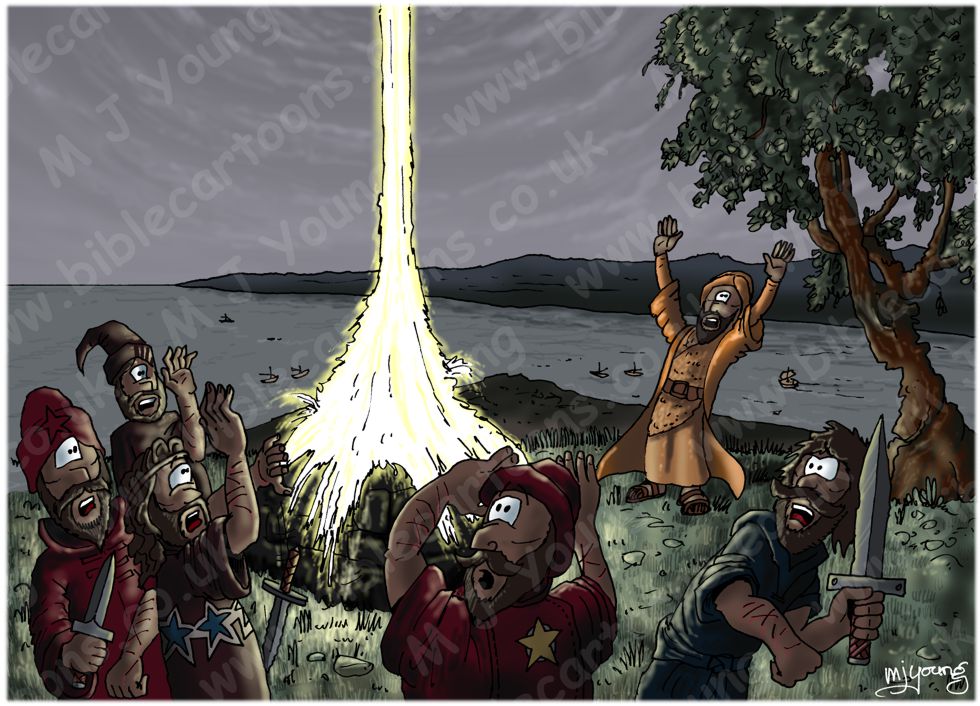 
Here is my latest cartoon which shows Elijah on mount Carmel.

1 Kings 18:36-39 (NLT)
At the customary time for offering the evening sacrifice, Elijah the prophet walked up to the altar and prayed, “O LORD, God of Abraham, Isaac, and Jacob, prove today that you are God in Israel and that I am your servant. Prove that I have done all this at your command.
O LORD, answer me! Answer me so these people will know that you, O LORD, are God and that you have brought them back to yourself.”
Immediately the fire of the LORD flashed down from heaven and burned up the young bull, the wood, the stones, and the dust. It even licked up all the water in the ditch!
And when the people saw it, they fell on their faces and cried out, “The LORD is God! The LORD is God!”

LIGHTING NOTES:
Scene 07 – Heavenly fire – the fire from heaven is the major light source in this cartoon.

RESEARCH/ADDITIONAL NOTES:
Scene 07 – Heavenly fire
Google earth position & orientation – 32°49’34.01“N 34°58’15.81“E looking NNW, over the Haifa Bay. The Mediterranean Sea is off to the left. Mount Merom can be seen on the horizon, between the branches of the oak tree on the right of the cartoon. Them ountain is approximately 28 miles away. Incidentally, the Sea of Galilee is approximately 31.5 miles away, due east, though not visible from this cartoon vantage point.

I wanted the fire from heaven to be very bright & pure, so made it white hot, pouring down from heaven like liquid metal, reminiscent of metal from a foundry, being poured out.

1 Kings 18:28 (NLT) states: “So they [the prophets of Baal] shouted louder, and following their normal custom, they cut themselves with knives and swords until the blood gushed out.” I have drawn the cuts on the arms of the prophets in my cartoon, & represented their blood a little, but didn’t particularly want to depict them with “blood gushing out”!

I draw & completed the Transfiguration (from Luke 9) in June 2009. In that series of cartoons I had worked out what Elijah looked like & have used the same clothing & colour scheme for him in this cartoon on mount Carmel.