I’ve just completed the scene in Genesis 37, where Jacob gives a coat of many colours to Joseph.

For several months I have been drawing the banners, basing my designs in scripture to be found in Genesis 49:1-28, where Jacob blesses his sons. Genesis 49 verse 1 says, ‘Then Jacob called together all his sons and said, “Gather around me, and I will tell you what is going to happen to you in the days to come.’ There follows Jacob’s prophesy about each son, which provided a visual image for my banner design. For example, Reuben (Jacob’s oldest son) is described by Jacob as being ‘as unruly as the waves of the sea’ & so I thought I would create a sea wave pattern & colour scheme, which reflects this prophecy.

Here are the 12 sons of Jacob, with Jacob’s prophetic words for each son, followed by the design element (often an animal) & colours I have used for each heraldic banner:


Having decided on which design element & colour would reflect which son, it was easy, when it came to drawing this particular cartoon (Jacob giving the coat to Joseph) to simply colour each son’s clothing according to the colour scheme I had previously worked out.

Below is a copy of the cartoon I have just finished, with details of who’s who.

I have made the skin & hair colour of several of the son’s of Jacob similar, which is to reflect their particular parantage. As the diagram below shows, Jacob had 4 wives: Leah & Rachel, & each of their maidservants. From those 4 women came the 12 sons of Jacob… 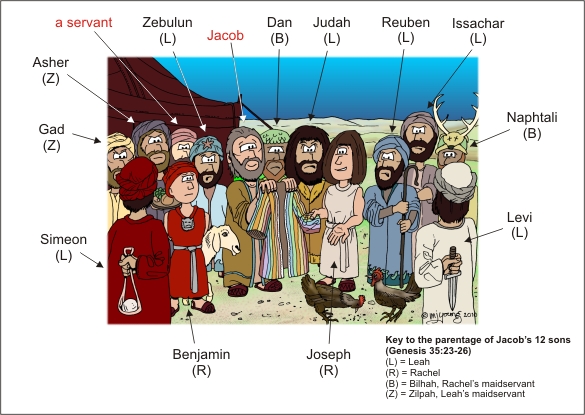 Follow this link to see this Bible Cartoon on the BC Gallery page, with download & purchase options:
Bible Cartoon: Genesis 37 – Joseph’s Dreams – Scene 02 – The coat of many colours