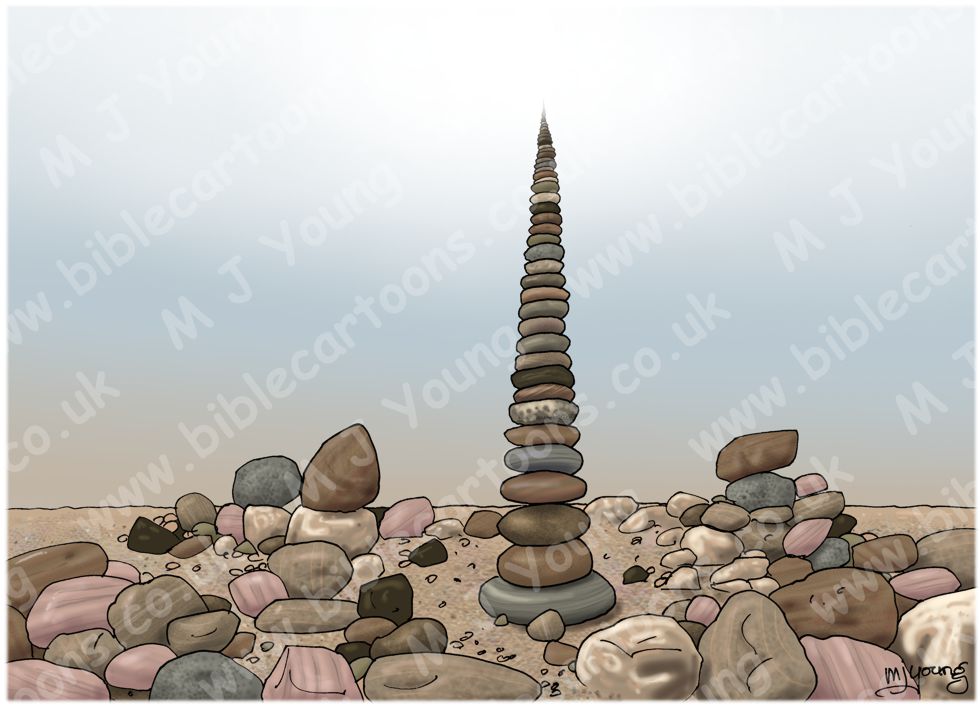 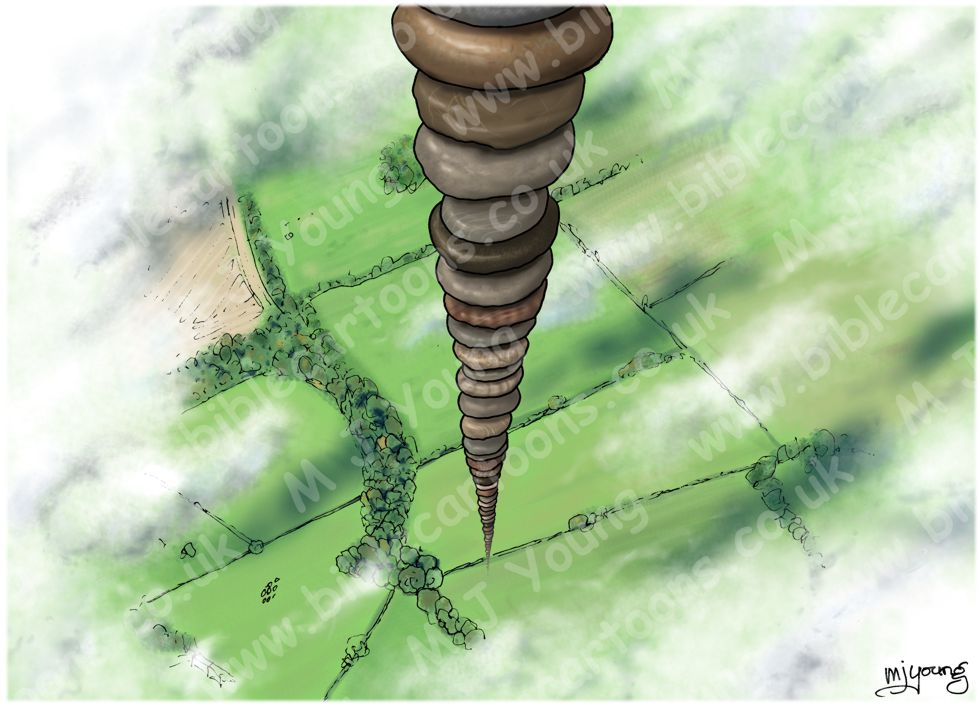 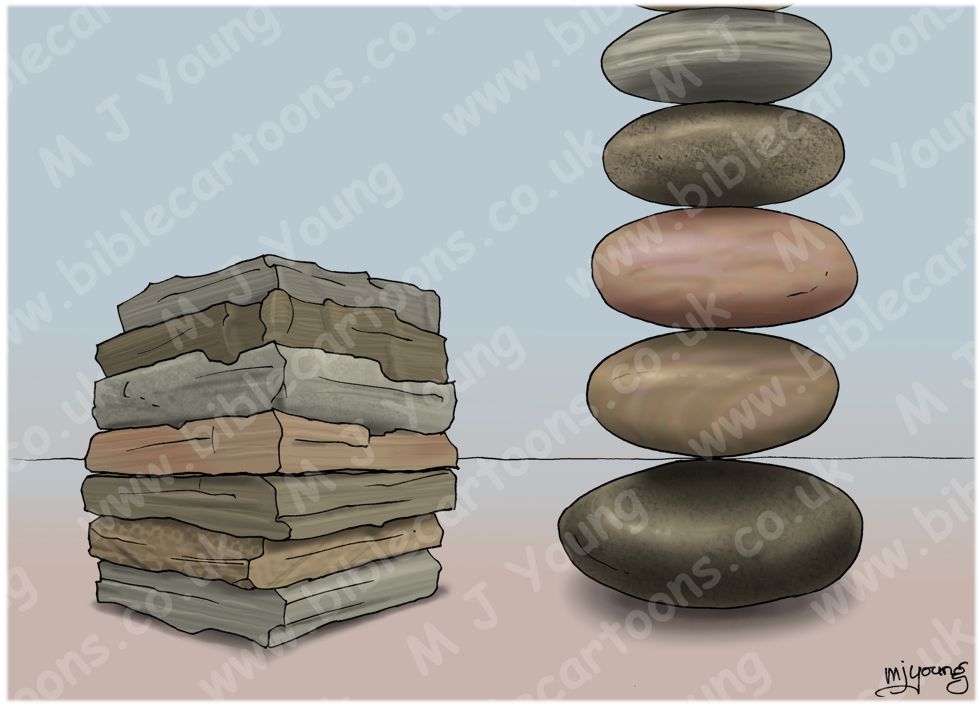 ”Impossible” pebble stack – comparison view
This picture has been been drawn to show a comparison between flat square stones (and how easily they can be stacked) and rounded ones. How unlikely it would be for rounded stones to be able to be piled several high, let alone hundreds high, up into the sky… without God’s power holding them upright!


Yesterday (Sunday 01/February/2015) I saw a picture whilst Paul (our pastor) was talking to us. The initial scene I saw in my imagination was like the first one above (Beach view). The scene was on a pebble/shingle beach. In front of me was a stack of rounded pebbles, one balanced on top of another. The “work” reminded me of photographs of Andy Goldsworthy, the British sculptor, photographer & environmentalist. By all accounts he made environmental sculptures of piles of stones famous! Anyway, I looked at the stack of round pebbles in front of me, & realised that the pile went way, way, WAY up into the air – completely out of sight in fact!

The following scene (in my vision picture) was high up in the air, looking down towards the patchwork of farm fields, far below. I could see the land through breaks in the clouds. I was instantly aware of the pile of round pebbles emerging from the land far below, & coming straight up, past me, & on up into the air, much further above my lofty viewpoint.
The second scene above shows this aerial view of the pebble stack.

The last “scene” wasn’t actually in my vision picture, but it highlights my thought process regarding the rounded nature of the pebbles.

More of the pebble stack vision picture.
Initially I just “looked” at the rounded pebbles on the beach. I wasn’t particularly impressed or moved, or excited by the scene! But in the next moment my “eyes” (in the vision picture) became aware of the vertical extent of the pile of rounded stones or pebbles – they reach straight up, going out of my sight into the distance. I was amazed that round stones could be staked up like that!
Then in the next scene I was looking down at the same pile of pebbles, as it came up past me in the air. I must have been several thousand feet up.

I immediately thought “how can that pile of pebbles be stacked up like that?!” I knew (from trying to actually build round pebble towers or stacks on the beach) that we can’t usually stack more than about 7-10 stones vertically together. This is because the more rounded the stones are, the harder they are to balance one on top of another, without them falling over. By the way, that is the purpose of my 3rd scene above, it is comparing the relative ease of stacking angular, flat stones one on top of another (see the left hand side stack) & the difficulty of stacking rounded stones (on the right). Flat stones are easier to stack because they have a large surface area of contact between the rock. The problem with trying to stack even 2 round surfaces together is that they have very little surface area in contact with each other, which translates into a tendency to topple over! I deliberately drew the contact point between the base & 1st rounded stone on the horizon line, so that you can see the tiny amount of surface contact between the 2 rounded pebbles.
Now imagine that tiny bit of contact between EVERY rounded pebble in the stack I “saw” going thousands of feet up into the air – that’s why I was impressed!

As I wrote earlier, my initial thought to question how it was possible for the pile of pebbles to remain stacked up like that. Surely it would just topple over, in the slightest breath of wind? But I could “see” that the pile of rounded stones was dead straight. And I just “knew” that it wouldn’t topple over. I also “knew” that it was God who was holding it up, so that it wouldn’t fall over.

I was “caught” between doubt & faith! My human knowledge of stacking round pebbles on a beach “told me” that it wasn’t possible to achieve the incredible balancing act of the pebbles in my human power. Yet my faith “told me” that anything is possible with God – & that was really exciting to “see” in the case of this pile of “impossible” pebble pile. Yes, it was exciting to actually “see” the pile in my imagination, soaring up into the air. I “knew” that no human builder, no matter how skilled, could ever accomplish a feat like that; it could only be the hand of God. I was really excited to “see” what God could achieve; it amazed me & delighted me too.

One thing I did “know” – that stack of pebbles would fall down. It was held there & nothing on earth could make it fall over. It was “rock solid” (pun intended!) & no amount of force could knock it over.

Possible meaning or interpretation of the pebble stack vision picture.
So what does it mean, if anything?
Well, I think for me it is about recognising the truth of the Bible quotation “nothing is impossible for God” in Matthew 19 & Luke 01 *1.
Even in my imagination I still have some things which “look” impossible to me! Yet God is quite capable of holding up a pile of round pebbles for as long as He wants to! I could even “feel” my doubt & questioning attitude in my vision picture/imagination, but that pile of stones DIDN’T fall down. That means a lot to me, as I have reflected on the scenes.

Matthew 19:26 (Amplified Bible)
[In reference ro the rich man & the disciples question “Who ten can be saved?!”]
26 Jesus looked at them [the disciples] intently and said, “Humanly speaking, it is impossible. But with God everything is possible.”

Luke 01:37 (Amplified Bible)
37 For with God nothing is ever impossible and no word from God shall be without power or impossible of fulfillment.