Here’s an interesting article about bee-keeping in Biblical times! Apparently there was no actual archeological evidence of this practice, until three years ago. Some of the main points in the article are quoted below:

“Ancient bees found in Israel hailed from Turkey
The origin of insects found in clay beehives in the Jordan Valley, the oldest known commercial beekeeping facility in the world, suggests extensive trading and complicated agriculture 3,000 years ago…

..three years ago, researchers found a 3,000-year-old apiary [bee hive] in the Iron Age city of Tel Rehov in the Jordan Valley, the oldest known commercial beekeeping facility in the world…

..The lack of archaeological evidence about beekeeping is not surprising, Mazar [1] said, because the hives were constructed of straw-based unbaked clay similar in appearance to hives used in the region today. Even in the arid desert of Israel, such unbaked clays do not survive for long…

…The Israelites prized honeybees for the honey they produced and for the wax of their combs, which was used in metallurgical casting. Mazar and his colleagues suspect that there may have been bronze-casting workshops near the apiary, but have yet to discover any…” 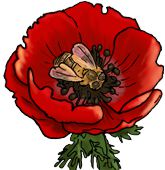 [1]
archaeologist Amihai Mazar of the Hebrew University of Jerusalem.

Here’s a quote from the ISBE about bees, for those interested:

“Bee
Honey is mentioned many times in the Bible, especially in the Old Testament, but the word “bee” occurs only four times, and only one of the four times in connection with honey in the story of Samson (Judges 14:8). Both wild and domesticated bees are found today in Palestine, but it is not clear that bees were kept in Bible times, although it would seem very probable. The frequently recurring phrase, “a land flowing with milk and honey,” certainly suggests that the honey as well as the milk is a domestic product. The hives now in use are very primitive and wasteful as compared with hives that are made in Europe and America. Sometimes a large water jar is used. More frequently a cylinder about 3 or 4 ft. long and 6 inches in diameter is constructed of mulberry withes plaited together and plastered with mud or cow dung. A number of these cylinders are placed horizontally, being piled up together under some rude structure which serves as a protection from the direct rays of the sun. In the passage already cited it is related that Samson found a swarm of bees and honey in the carcass of the lion which he had killed on his previous visit. We are not told how much time had intervened, but it does not take long in the dry climate of Palestine for scavenging beasts and insects to strip the flesh from the bones and make the skeleton a possible home for a swarm of bees. The other three passages refer to the offensive power of bees. In Deuteronomy 1:44, in the speech of Moses he says, “The Amorites chased you, as bees do”; in Psalms 118:12, the psalmist says, “They compassed me about like bees”; in Isaiah 7:18, the bee is the type of the chastisement that the Lord will bring from the land of Assyria.
- Alfred Ely Day”
(Source: International Standard Bible Encyclopedia)