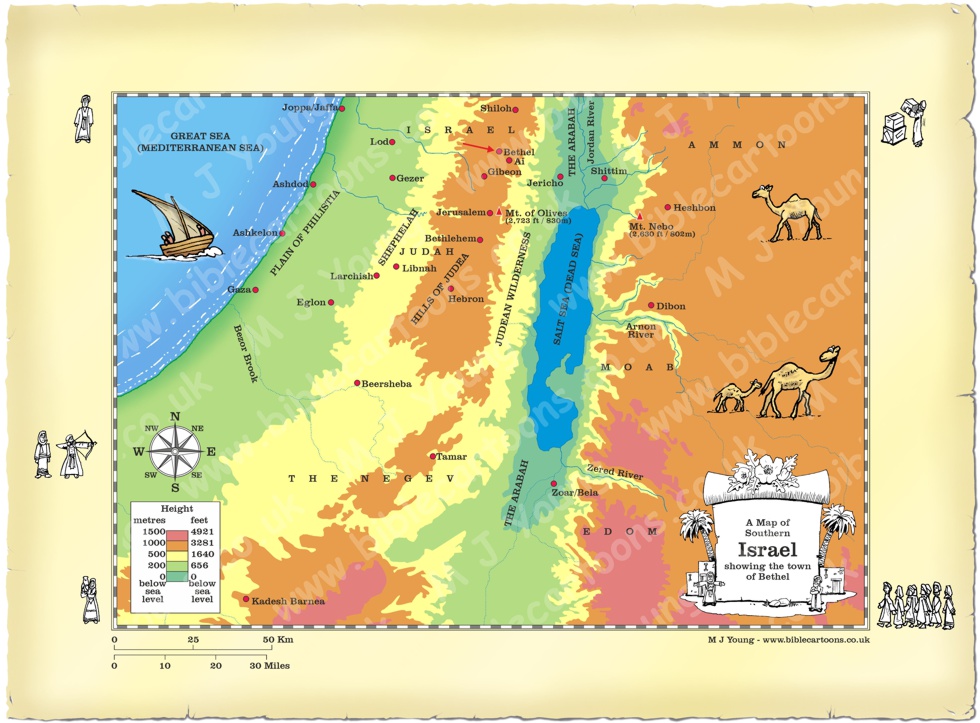 This is my map of Southern Israel showing the position of the town of Bethel, which was about ten miles North of Jerusalem. Bethel is first mentioned in Genesis, where Abraham camped (Genesis 12:8; Genesis 13:3). It was named Bethel (meaning “house of God”) by Jacob-Israel, who famously dreamed of a stairway reaching from Earth to heaven at this place (Genesis 28:10-22).

Dates
According to The Chronological Life Application Study Bible the migration of Terah and his family (Abram, Sarai, Lot, etc) from Ur to Haran occurred around 2000 B.C.

Jacob-Isreal camped at Bethel in the early part of the 19th Century B.C.

Links to related Bible Cartoons
Click orange bar below to see the Bible Cartoon of Jacob-Isarel sleeping and dreaming of the stairway, on the BC Gallery page, with download & purchase options:
Bible Cartoon: Genesis 28 – Jacob’s dream at Bethel – Scene 02 – Stairway

br />
Click orange bar below to see the Bible Cartoon of Jacob-Isarel sleeping and dreaming of the stairway, on the BC Gallery page, with download & purchase options:
Bible Cartoon: Genesis 13 – Abram and Lot separate – Scene 03 – Land choice

Bible References
Genesis 12:8 (NLT)
8 After that, Abram travelled southward and set up camp in the hill country between Bethel on the west and Ai on the east. There he built an altar and worshipped the LORD.

Genesis 13:3 (NLT)
3 Then they [Abram and his company] continued traveling by stages toward Bethel, to the place between Bethel and Ai where they had camped before.

Genesis 28:10-19 (NLT)
10 Meanwhile, Jacob left Beersheba and traveled toward Haran. 11 At sundown he arrived at a good place to set up camp and stopped there for the night. Jacob found a stone for a pillow and lay down to sleep. 12 As he slept, he dreamed of a stairway that reached from earth to heaven. And he saw the angels of God going up and down on it.
13 At the top of the stairway stood the LORD, and he said, “I am the LORD, the God of your grandfather Abraham and the God of your father, Isaac. The ground you are lying on belongs to you. I will give it to you and your descendants. 14 Your descendants will be as numerous as the dust of the earth! They will cover the land from east to west and from north to south. All the families of the earth will be blessed through you and your descendants. 15 What’s more, I will be with you, and I will protect you wherever you go. I will someday bring you safely back to this land. I will be with you constantly until I have finished giving you everything I have promised.”
16 Then Jacob woke up and said, “Surely the LORD is in this place, and I wasn’t even aware of it.” 17 He was afraid and said, “What an awesome place this is! It is none other than the house of God—the gateway to heaven!” 18 The next morning he got up very early. He took the stone he had used as a pillow and set it upright as a memorial pillar. Then he poured olive oil over it. 19 He named the place Bethel—“house of God“—though the name of the nearby village was Luz.