Purchased Maps do not have watermarks. 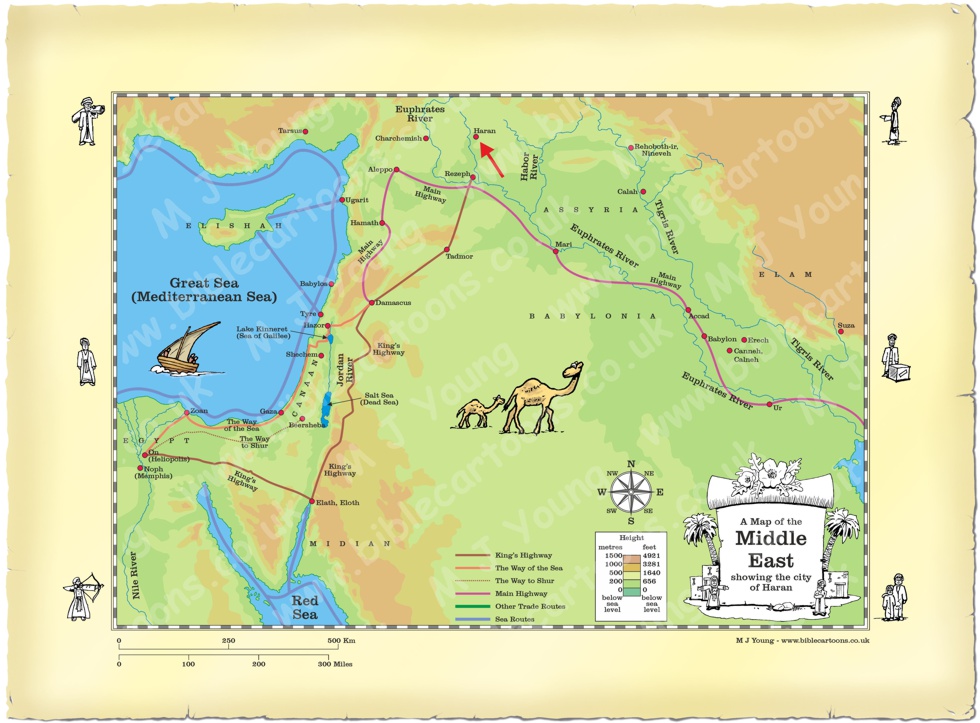 This is my map of the Middle East, showing the city of Haran (indicated by red arrow), which was an ancient northern Mesopotamian commercial city on the Balikh River. It was located in Paddan-aram (“field of Aram”) built up on the busy caravan road connecting Nineveh, Asshur, and Babylon in Mesopotamia (East of Haran) with Mediterranean cities like Tyre, also Damascus and Egyptian cities in the South West of the Fertile Crescent. Haran had easy access to both the Assyrian and Babylonian trade routes, but also to a north-running road that provided easy access to Asia Minor.

Later in Genesis, Rebekah (Isaac’s wife) was brought from Nahor, a neighboring city of Haran (see Genesis 24). Genesis 29 records that Jacob’s wife’s Leah and Rachel also came from this region. Of course Jacob himself spent twenty years in Haran and most of his children were born there as well.

The city of Haran remained an important trading centre through many centuries. At Haran the Assyrians made their last stand (609 B.C.), and three years later the city fell to the Medes, who destroyed it and drove the Assyrians back across the Euphrates.

Date
According to The Chronological Life Application Study Bible the migration of Terah and his family (Abram, Sarai, Lot, etc) from Ur to Haran occurred around 2000 B.C.

Bible References
Genesis 11:31-32 (NLT)
31 Terah took his son Abram, his daughter-in-law Sarai, and his grandson Lot (his son Haran’s child) and left Ur of the Chaldeans to go to the land of Canaan. But they stopped instead at the village of Haran and settled there.
32 Terah lived for 205 years [1] and died while still at Haran.