Map of Middle East: Abram/Abraham's journey from Ur to Canaan 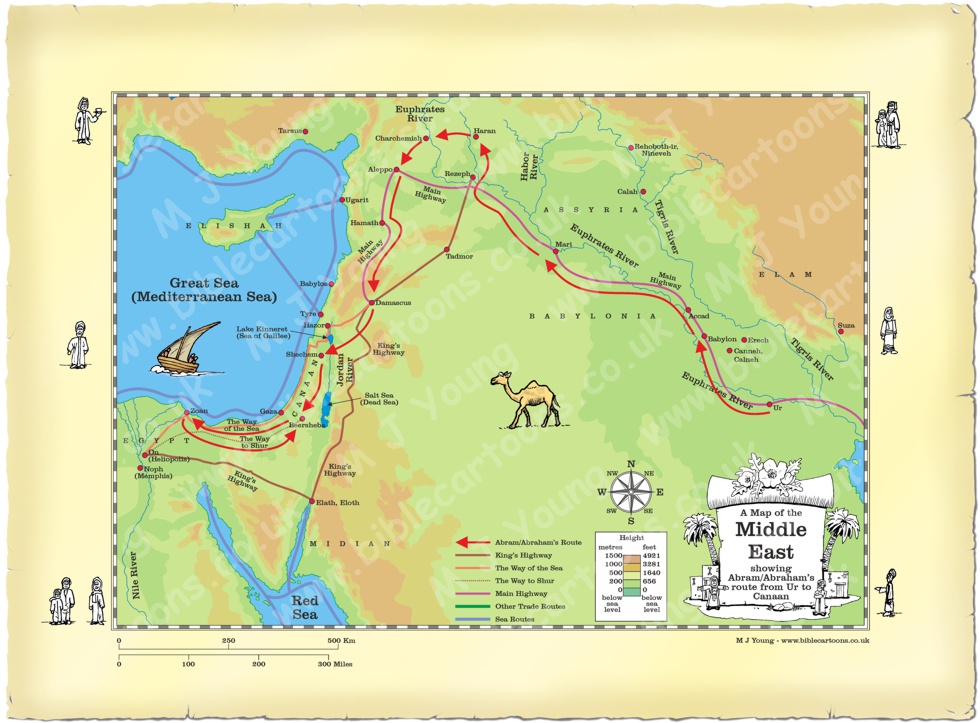 This is my map of the Middle East, showing the route Abram took, going from Ur of the Chaldeans to Haran and then on to Canaan, into Egypt and finally back to Canaan again. The red arrowed lines show the route he took.

The first part of the journey involved Terah (Abram’s father), Abram, Sarai (Abram’s wife), Lot (Terah’s grandson) and all their goods and servants, travelling from Ur of the Chaldeans to Haran, a northern Mesopotamian commercial city (Genesis 11:27-32) (for all Bible reference, see bottom of page). We know from verse 32 that Abram’s father Terah died in Haran.

Some time later God spoke to Abram (when he was 75 years old) and he continued the migration from Haran to near Shechem, in Canaan (Genesis 12:1-6). He then camped between Bethel and Ai and built an altar to the Lord there (Genesis 12:8) and then moved in stages into the Negev desert (Genesis 12:9). Next a severe famine in Canaan drove Abram and his company into Egypt (Genesis 12:10).

Genesis 13:1-4 tells of Abram’s journey from Egypt back through the Negev to the same camp between Bethel and Ai, where he had built an altar to the Lord. Genesis 13:5-13 records the separation of Lot from Abram as the land of Canaan couldn’t support all their flocks and herds living so close together.

Distances
I thought it might be interesting to try to calculate how far Abram, Sarai, Lot and their company walked, on all their travels. Using the line/path drawing function in Google Earth I calculated the following:

03) In a straight line from Shechem, to Bethel, to Egypt it is about 254 miles (409 Km). This is assuming Abram went via Beersheba and walked “The Way to Shur” (an ancient road) into Egypt and that he stopped at Raamses. If Abram went to On (aka Heliopolis) we’d have to add another 60 miles (97 Km) to that trek!

As an absolute minimal then, Abram, Sarai, Lot and all their herds, livestock, servants, etc must have walked 1551 miles (2494 Km) and it was probably MUCH more than that!

Date
According to The Chronological Life Application Study Bible, Abraham was born in 2166 B.C., during the Early Bronze Age, and the migration of Abram from Haran to Canaan occurred around 2091 B.C.

Bible References
Genesis 11:27-32 (NLT)
The Family of Terah
27 This is the history of Terah’s family. Terah was the father of Abram, Nahor, and Haran; and Haran had a son named Lot. 28 But while Haran was still young, he died in Ur of the Chaldeans, the place of his birth. He was survived by Terah, his father. 29 Meanwhile, Abram married Sarai, and his brother Nahor married Milcah, the daughter of their brother Haran. (Milcah had a sister named Iscah.) 30 Now Sarai was not able to have any children.
31 Terah took his son Abram, his daughter-in-law Sarai, and his grandson Lot (his son Haran’s child) and left Ur of the Chaldeans to go to the land of Canaan. But they stopped instead at the village of Haran and settled there.
32 Terah lived for 205 years [1] and died while still at Haran.

Genesis 12:1-6 (NLT)
The Call of Abram
1 Then the LORD told Abram, “Leave your country, your relatives, and your father’s house, and go to the land that I will show you. 2 I will cause you to become the father of a great nation. I will bless you and make you famous, and I will make you a blessing to others. 3 I will bless those who bless you and curse those who curse you. All the families of the earth will be blessed through you.”
4 So Abram departed as the LORD had instructed him, and Lot went with him. Abram was seventy-five years old when he left Haran. 5 He took his wife, Sarai, his nephew Lot, and all his wealth—his livestock and all the people who had joined his household at Haran—and finally arrived in Canaan. 6 Traveling through Canaan, they came to a place near Shechem and set up camp beside the oak at Moreh. At that time, the area was inhabited by Canaanites.
7 Then the LORD appeared to Abram and said, “I am going to give this land to your offspring.” And Abram built an altar there to commemorate the LORD’s visit. 8 After that, Abram traveled southward and set up camp in the hill country between Bethel on the west and Ai on the east. There he built an altar and worshiped the LORD. 9 Then Abram traveled south by stages toward the Negev.

Abram and Sarai in Egypt
10 At that time there was a severe famine in the land, so Abram went down to Egypt to wait it out.

Genesis 13:1-13 (NLT)
Abram and Lot seperate
1 So they left Egypt and traveled north into the Negev—Abram with his wife and Lot and all that they owned,
2 for Abram was very rich in livestock, silver, and gold. 3 Then they continued traveling by stages toward Bethel, to the place between Bethel and Ai where they had camped before. 4 This was the place where Abram had built the altar, and there he again worshiped the LORD.
5 Now Lot, who was traveling with Abram, was also very wealthy with sheep, cattle, and many tents. 6 But the land could not support both Abram and Lot with all their flocks and herds living so close together. There were too many animals for the available pastureland. 7 So an argument broke out between the herdsmen of Abram and Lot. At that time Canaanites and Perizzites were also living in the land.
8 Then Abram talked it over with Lot. “This arguing between our herdsmen has got to stop,” he said. “After all, we are close relatives!
9 I’ll tell you what we’ll do. Take your choice of any section of the land you want, and we will separate. If you want that area over there, then I’ll stay here. If you want to stay in this area, then I’ll move on to another place.” 10 Lot took a long look at the fertile plains of the Jordan Valley in the direction of Zoar. The whole area was well watered everywhere, like the garden of the LORD or the beautiful land of Egypt. (This was before the LORD had destroyed Sodom and Gomorrah.)
11 Lot chose that land for himself—the Jordan Valley to the east of them. He went there with his flocks and servants and parted company with his uncle Abram. 12 So while Abram stayed in the land of Canaan, Lot moved his tents to a place near Sodom, among the cities of the plain. 13 The people of this area were unusually wicked and sinned greatly against the LORD.