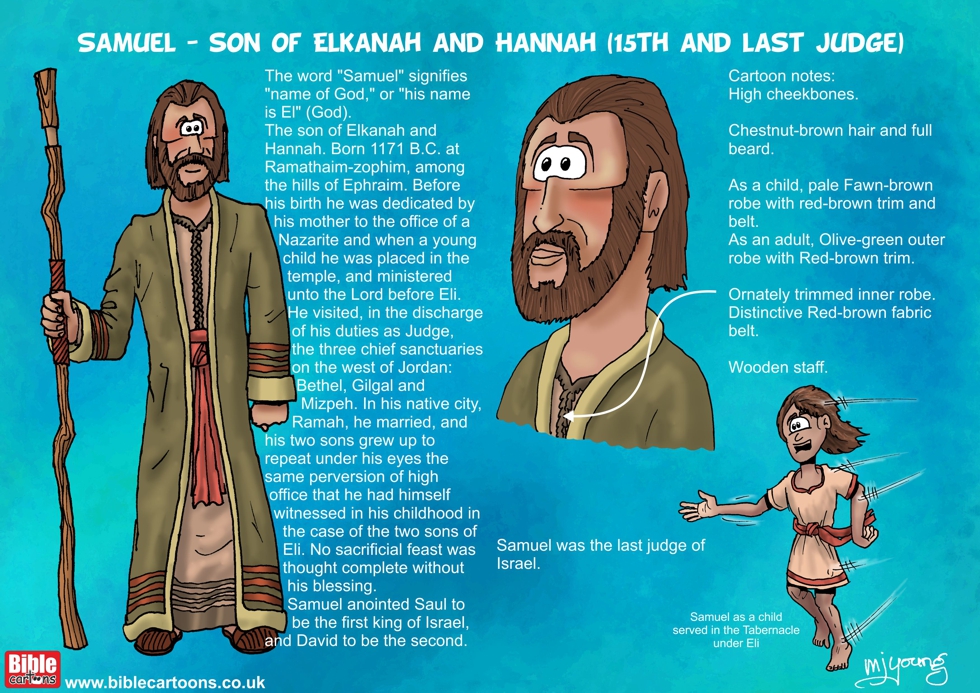 This is my character sheet, or design specification, for Samuel, who was a judge and High Priest.

The purpose of this sheet is to keep a record of the attributes or characteristics of my drawing, so that I can draw a similar-looking cartoon in all future scenes showing Samuel. I have included a brief personal history on the sheet as well.

I first drew my version of Samuel in May 2013, with the “1 Samuel 03 – Samuel’s childhood – Scene 06 – Eli’s advice to Samuel” picture. Although my style has changed a bit since those early cartoons, I try to maintain the same facial features, colouring and clothing style, so that the figure is recognizably that of Samuel, even when months or years have elapsed between drawings.

Personal History
Samuel was born in 1171 B.C. to Elkanah and Hannah, and was born at Ramathaim-zophim, among the hills of Ephraim.

Before his birth Samuel was dedicated by his mother to the office of a Nazarite and when a young child was placed by her in the temple, and ministered unto the Lord before Eli. Whilst here Samuel received his first prophetic call from the Lord God (see 1 Samuel 3:1-18), which foretold the downfall of Eli.

He next appears (probably twenty years afterwards) suddenly among the Israelites, warning them against their idolatrous practices (see 1 Sam 7:3, 4). Then followed Samuel’s first and, as far as we know, only military achievement, 1 Sam 7:5-12 but it was apparently this which raised him to the office of “judge.”

As Judge, Samuel resided in the city of Ramah, but annually visited the three chief sanctuaries on the western side of the Jordan river: Bethel, Gilgal and Mizpeh (see 1 Samuel 7:16).

In Ramah, Samuel married, and had two sons, who unfortunately grew up to repeat the same sins of high office that he had himself witnessed in his childhood in the case of the two sons of Eli.

In his old age Samuel saw the people of Israel dissatisfied and demanding a king, and finally he anointed Saul as the first king of Israel.

No sacrificial feast was thought complete without Samuel’s blessing. A peculiar virtue was believed to reside in his intercession. After Saul was rejected by God, Samuel anointed David in his place and Samuel became the spiritual father of the psalmist-king.

The death of Samuel is described as taking place in the year of the close of David’s wanderings. It is said with peculiar emphasis, as if to mark the loss, that “all the Israelites were gathered together” from all parts of this hitherto-divided country, and “lamented him,” and “buried him” within his own house, thus in a manner consecrated by being turned into his tomb. 1 Sam 25:1. Samuel represents the independence of the moral law, of the divine will, as distinct from legal or sacerdotal enactments, which is so remarkable a characteristic of all the later prophets. He is also the founder of the first regular institutions of religious instructions and communities for the purposes of education.