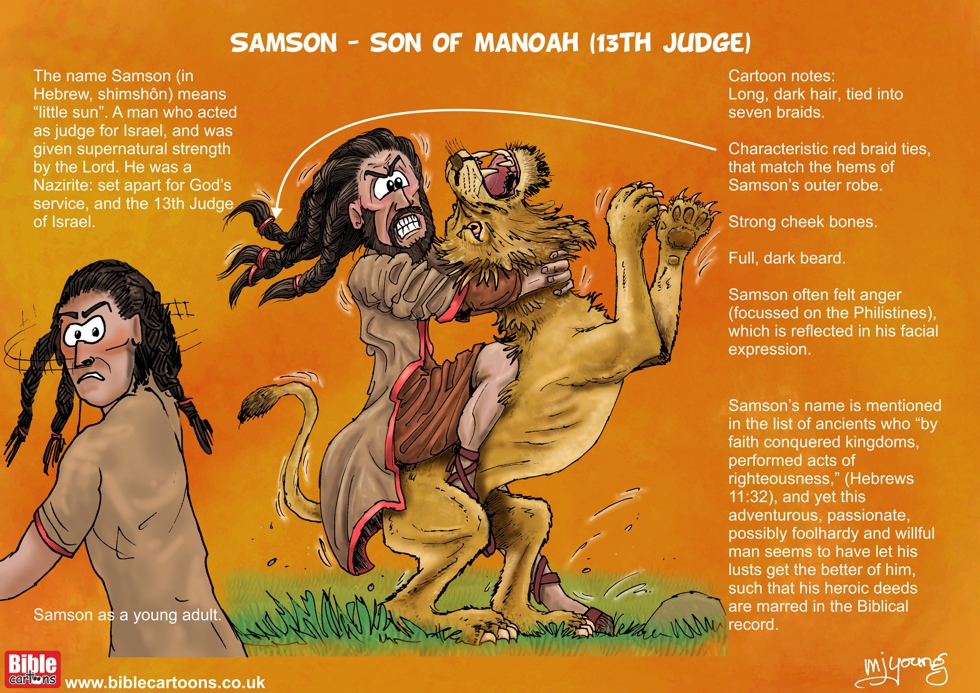 This is my character sheet, or design specification, for Samson. The purpose of this sheet is to keep a record of the attributes or characteristics of my drawing, so that I can draw a similar-looking cartoon in all future scenes showing Samson.

I first drew my version of Samson in July 2009, with the “Judges 16 – Samson – Scene 22 – Samson in temple” picture. Although my style has changed a bit since those early cartoons, I try to maintain the same facial features, colouring and clothing style, so that the figure is recognizably that of Samson, even when months or years have elapsed between drawings. In that early scene, Samson was only dressed in a loin cloth. In subsequent (and more recent) scenes, I have established a sort of “uniform” for the character, so that he is easily recognizable.

Personal History
In Hebrew the name Samson (shimshôn) means “little sun”. Samson was the 13th judge and deliverer of Israel in and around 1070 B.C.

Samson’s name is mentioned in the list of ancients who “by faith conquered kingdoms, performed acts of righteousness” (see Hebrews 11:32) which suggests his character was that of a hero. Samson was a Nazirite from birth: specially dedicated to the service of the Lord God. In Samson we see a man towering in supernatural strength through his firm faith and confident reliance on the gift God gave him. On the other hand we see in Samson an passionate, adventurous, perhaps foolhardy, and willful man, who seems to dishonour his God-given power by making it subservient to his own lusts.

Samson was the son of Manoah, who lived in Zorah, of the tribe of Dan. Manoah’s un-named wife received a vist from an angel of the Lord, who foretold that Samson should be a “Nazirite to God from the womb” (Judges 13:2-5, 24). Samson grew up under the special influence of the Lord, at last being impelled to begin conflict with the Philistines (the sea people who lived on the Mediterranean coast near Israel). In the end, this conflict ended with the death of Samson in the temple of Dagon, the god of the Philistine people.

Notably Samson killed a young lion with his bear hands, as the power of God coursed through him. Upon a later visit to the carcass, Samson extracted honey from a bee’s nest inside the lion’s dead body.

When Samson was about twenty years old he visited Timnath, and saw a Philistine girl who pleased him. He asked his parents to arrange for him to take her as his wife. Being Israelites, they were averse to such a marriage, since Hebrew people in those days were taught to marry within their own Israelite clans. Nevertheless, Samson persisted, and at the wedding feast he proposed a riddle, conforming to the oriental custom of furnishing entertainment for his guests. Those same guests threatened Samson’s fiancee (”we’ll burn your father’s house to the ground!”) being unable to solve his riddle. Seized with indignation that the guests had solved his riddle, Samson went to Ashkelon, killed thirty Philistines, and gave these “changes of clothing” to the guests who had solved the riddle! Judges 14:1-20 records that Samson returned to his father’s house, and his fiancee was given to his companion.

Samson soon after returned to his fiancee’s father’s home, but was refused admission. He resolved to avenge himself upon the whole Philistine nation. To do this Samson caught 300 foxes (perhaps jackals) and, by tying them in pairs, and placing a lit torch in their tails, set fire to the fields, vineyards, and olive groves of his enemies (see Judges 15:1-5). In retaliation, the Philistines burning Samson’s fiancee and her father’s house the the ground, as Samson’s guests had told her they would! Samson retaliated again, in that “he struck them ruthlessly with a great slaughter,” after which he went down and dwelt in the “cleft of the rock of Etam” (Judges 15:6-8).

The Philistines came to avenge themselves on Samson, and camped in Judah. 3,000 of the Judeans, instead of recognizing Samson as their deliverer, went to Etam to bind him and hand him over to their enemies the Philistines. They bound him with two new cords, and delivered him to the Philistines. When he heard their shout of joy his extraordinary strength snapped the cords, and seizing a fresh donkey’s jawbone of he killed a thousand Philistine men. Weary and thirsty, Samson prayed to the Lord, who caused a stream to flow from the rock, which Samson called En-hakkore (i.e., “the well of him that prayed”).

Samson then went to the Philistine city Gaza and became intimate with a woman of loose character residing there. The Gazites locked the city gates, intending to kill him in the morning. But at midnight Samson rose up and, breaking away bolts, bars, and hinges, carried the gates to the top of a neighboring hill looking toward Hebron (see Judges 16:1-3)

Still later, Samson became infatuated with a woman of Sorek, named Delilah. She used all her arts and seductions to persuade Samson to reveal the secret of his strength. Three times he avoided capture, but at last, teased into compliance, “he told her all that was in his heart,” and said, “If I am shaved, then my strength will leave me and I shall become weak and be like any other man.” Delilah lost no time in having Samson’s hair cut off, and gave the predetermined signal, “The Philistines are upon you, Samson!” who fell easy prey to his enemies.

The Philistines put out Samson’s eyes and led him, bound with bronze chains, to Gaza, where he was made to grind grain in the prison. Of course, Samson’s hair began to grow again, and yet the Philistines paid no attention to this fact. On the occasion of a sacrificial festival to Dagon (a Philistine god), his enemies brought Samson from the prison to make sport of him. Samson persuaded his attendant to place him between the pillars upon which the roof was supported. After a brief prayer he grasped the pillars and, leaning forward with resistless force, brought down the building, causing his own death and that of 3,000 Philistines.

Later, Samson’s relatives came to Gaza, took away his body, and placed it in the tomb of his father, between Zorah and Eshtaol (Judges 16:21-31).