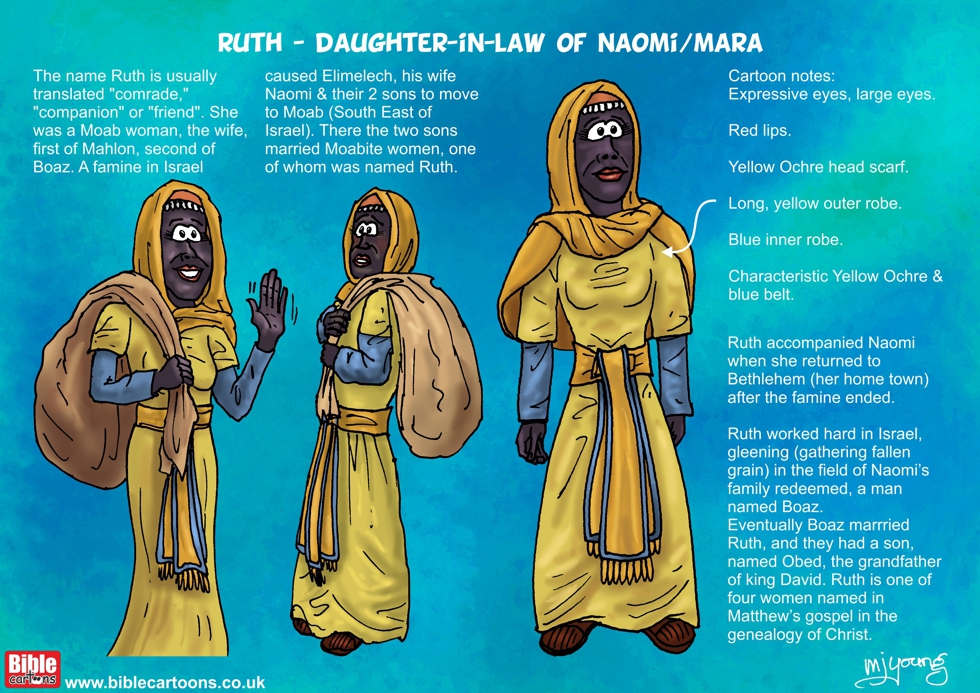 This is my character sheet, or design specification, for Ruth. The purpose of this sheet is to keep a record of the attributes or characteristics of my drawing, so that I can draw a similar-looking cartoon in all future scenes showing Naomi/Mara.

I first drew my version of Ruth in May 2012, with the “Ruth 01 – In Moab – Scene 05 – Ruth determined” picture. Although my style has changed a bit since those early cartoons, I try to maintain the same facial features, colouring and clothing style, so that the figure is recognizably that of Ruth, even when months or years have elapsed between drawings.

Personal History
The Hebrew for the name Ruth is usually translated as “friend”, “comrade” or “companion”.

Ruth was born in Moab, a nation to the south east of Israel. When Elimelech and his family moved to Moab (to escape the ravages of a famine in Israel), his two sons named Mahlon & Kilion, married Ruth & Orpah. Elimelech and his two sons died, and subsequently Naomi (Elimelech’s wife) decided to return to Bethlehem, in Israel, which was their family home, accompanied by her 2 daughter’s-in-law. On the way, Naomi urged Orpah and Ruth to return to their family homes in Moab. Orpah agreed and returned, but Ruth was determined to stay with Naomi.

Returning to Bethlehem, Naomi told the town’s folk that she should be called Mara, rather than Naomi, which means bitter, or bitterness, for Naomi believed that the Lord God had treated her bitterly.

Ruth went to work in a field, in order to bring some food back for Naomi & herself. Ruth worked by gleening (gathering grain that has been dropped by harvesting workers) in a field owned by a man named Boaz. He turned out to be a kinsman-redeemer of Naomi’s family. Naomi advised Ruth in her dealings with Boaz, resulting in their marriage. After Boaz and Ruth’s baby was born, Naomi was happy again, and nursed their child. Boaz & Ruth’s child was named Obed, who was the grandfather of king David, & ultimately, Ruth was an ancestor of Jesus the Christ.