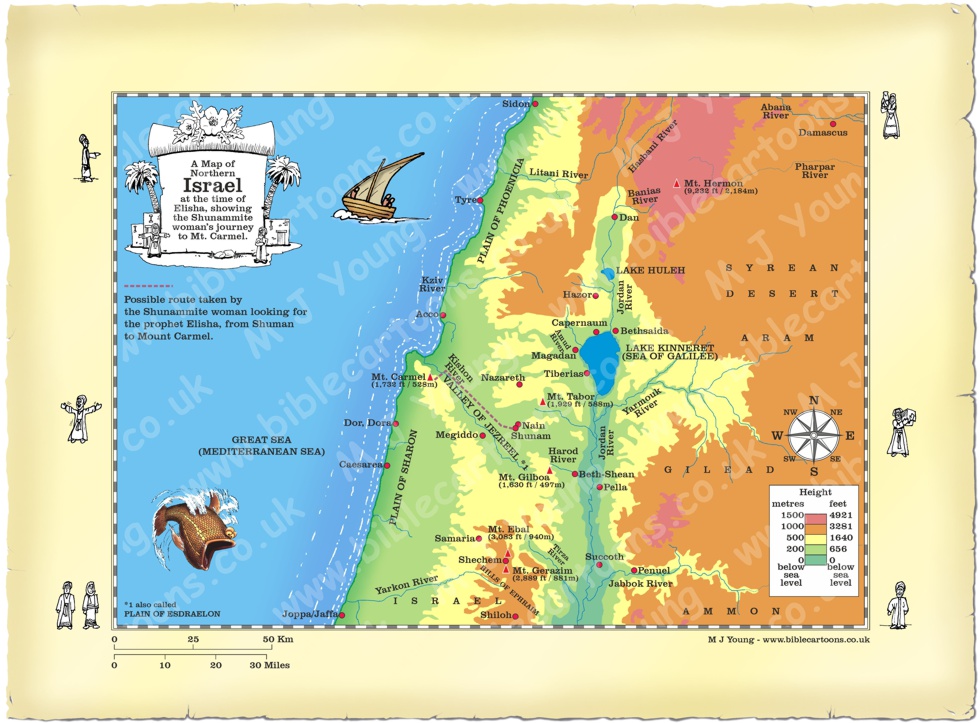 In 2 Kings chpt 04, we read the story of the Shunammite woman who goes in search of the prophet Elisha. The map above shows Shunam (the village where the woman lived) & a possible route she may have taken, to get to Elisha on Mount Carmel.

The woman in this Old Testament Bible story hadn’t got any children, but Elsiha predicted that she would have a son (2 Kings 04:15) & about a year later, she did. Unfortunately the son died ((2 Kings 04:20) but that did not deter this formidable woman. She rode a donkey from her home village/town of Shunam, to Mount Carmel, in search of the prophet Elisha. I imagine she believed that the man who had accurately predicted her son’s miraculous birth could also resurrect him.

I have identified Shunam & mount Carmel on these maps, & drawn a possible route that the woman might have taken, although the actual route is not mentioned in the Bible story.

Where was Shunam?
Shunam was a small village in the south eastern part of the Jezreel Valley (which is itself in northern Israel.) It nestles below the base of the Hill of Moreh (Judges 7:1 – The battle of Gideon.) It is marked on my map above.

A note about the journey from Shunam to Mount Carmel – how long did it take?
As stated above, Mount Carmel is 18.5 miles (30 km) away, in a straight line, “as the crow flies”, so the actual distance could have been 20 miles or more.
Bearing in mind that the Shunammite woman was riding a donkey led by a servant, & that she had to travel that distance, I wonder if she would have managed it in a single day.
I doubt that she could have travelled from her home village/town, managed to traverse the Jezreel valley, & get up the slope of Mount Carmel, meet with Elisha & Gehazi & then manage to do the return trip, all in 1 day!

The Bible account of this story, up til the point where the Shunammite woman is about to start her journey from Shunam to Mount Carmel:

2 Kings 4:8-23 (ANIV)
The Shunammite’s son restored to life
8 One day Elisha went to Shunem. And a well-to-do woman was there, who urged him to stay for a meal. So whenever he came by, he stopped there to eat.

9 She said to her husband, “I know that this man who often comes our way is a holy man of God. 10 Let’s make a small room on the roof and put in it a bed and a table, a chair and a lamp for him. Then he can stay there whenever he comes to us.”

11 One day when Elisha came, he went up to his room and lay down there. 12 He said to his servant Gehazi, “Call the Shunammite.” So he called her, and she stood before him. 13 Elisha said to him, “Tell her, ‘You have gone to all this trouble for us. Now what can be done for you? Can we speak on your behalf to the king or the commander of the army?’ “
She replied, “I have a home among my own people.”
14 “What can be done for her?” Elisha asked.
Gehazi said, “Well, she has no son and her husband is old.”
15 Then Elisha said, “Call her.” So he called her, and she stood in the doorway. 16 “About this time next year,” Elisha said, “you will hold a son in your arms.”
“No, my lord,” she objected. “Don’t mislead your servant, O man of God!”

17 But the woman became pregnant, and the next year about that same time she gave birth to a son, just as Elisha had told her.

18 The child grew, and one day he went out to his father, who was with the reapers. 19 “My head! My head!” he said to his father.
His father told a servant, “Carry him to his mother.”

20 After the servant had lifted him up and carried him to his mother, the boy sat on her lap until noon, and then he died.

21 She went up and laid him on the bed of the man of God, then shut the door and went out.
22 She called her husband and said, “Please send me one of the servants and a donkey so I can go to the man of God quickly and return.”
23 “Why go to him today?” he asked. “It’s not the New Moon or the Sabbath.”
“It’s all right,” she said.