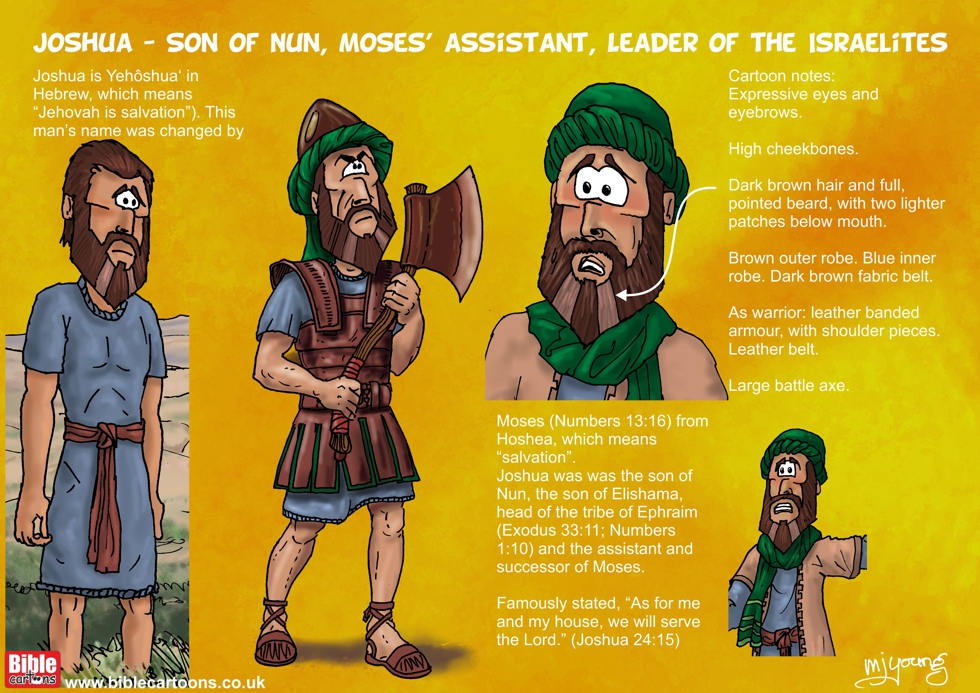 This is my character sheet, or design specification, for Joshua, son of Nun, first king of the Northern Kingdom of Israel. The purpose of this sheet is to keep a record of the attributes or characteristics of my drawing, so that I can draw a similar-looking cartoon in all future scenes showing Joshua. I have included a brief personal history on the sheet as well.

Joshua was the assistant to, and successor of, Moses the man of God.

The first mention of Joshua in the Bible can be found in Exodus 17:8-16, where he leads the Israelites to successful battle against the Amalekites at Rephidim, 1440 B.C. This is the famous story of Moses holding up his staff; when his hands ached, & he lowered them, the Israelites started to loose the battle. In the end Hur (Joshua’s father) & Aaron (Moses’ brother) held up Moses hands, with his staff, and the Israelites won the battle.

Exodus 24 recounts the story of Moses climbing Mount Sinai for the first time, to receive the stone tablets from God. When Moses ascended Sinai Joshua (referred to as his servant/aide/assistant), accompanied him part of the way and was the first to meet him on his return.

When Moses was told that Eldad and Medad were prophesying in the camp, Joshua asked Moses to forbid them, to which Moses replied, “Are you jealous for my sake? Would that all the Lord’s people were prophets, that the Lord would put His Spirit upon them!” (see Numbers 11:27-29). Soon after this interaction, Joshua was appointed as one of the twelve chiefs/spies, sent to explore the land of Canaan (see Numbers 13:8, 16-17). He and Caleb were the only ones to give an encouraging report of their discoveries. As a result of this, after the 40 years of wandering in the wilderness, Joshua was one of only a few survivors of that generation. Directed by the Lord God, Moses invested Joshua solemnly and publicly with authority, in connection with Eleazar, over the people of Israel (see Deuteronomy 3:28).

When Moses was told by the Lord that he would soon die, Joshua & Moses were called by God to the Tabernacle. While in the presence of God, Moses gave his faithful aide this commission from God: “Be strong and courageous, for you shall bring the sons of Israel into the land which I swore to them, and I will be with you.” (see Deuteronomy 31:14, 23).

Around 1400 B.C. Joshua assumed the command of the nation of Israel. Joshua, “filled with the spirit of wisdom” (Deuteronomy 34:9), sent spies into Jericho, where they were hidden & given lodging by Rahab. They returned to Joshua with an account of the fear of the people because of the Israelites (see Joshua 2). The next morning Joshua commanded the Israelite camp at Shittim be broken down & moved down to the edge of Jordan, which at this time (the early harvest in April), was in flood (see Joshua 3:15). The priests advanced in front of the people, bearing the Ark of the Covenant, and when their feet touched the water the river was divided & piled up. upstream, at a place called Adam. They stood in the middle of the now dry river and remained there until the people had all passed over. As soon as the priests left the river bed, the Jordan flooded again. in the mean time 12 men picked up 12 memorial stones from the middle of the dry river bed, to commemorate the occasion.

As Joshua stood near Jericho, he saw a warrior with a drawn sword in his hand, who announced himself as the “captain of the host of the Lord” and gave the divine plan for the capture of the city (see Joshua 5:13-14). There followed the surprising military tactic of marching around the city once a day for 7 days, then shouting, to bring the walls down. Joshua followed these unusual directions, then put the inhabitants to death, and destroyed the property found within. Only Rahab and her household were spared. The silver, gold, brass & iron, was placed in the sacred treasury (see Joshua 6).

There followed many battles, most of which the Israelites won. In six years Joshua was master of the whole land from Mt. Halak, at the ascent of Mt. Seir in the south, to Baal-gad, under Mt. Hermon in the north. He conquered six nations; thirty-one kings, including the Anakim, the old terror of Israel (see Joshua 11:1-12:24). Oncer the land was won, Joshua, in conjunction with Eleazar and the heads of the tribes proceeded to apportion the Promised Land, including the part yet unconquered, to the 12 tribes of Israel. Joshua settled in Timnath-serah, a city of the hill country of Ephraim (see Joshua 13-19). Once the inheritance of 5 of the tribes had been determined Joshua moved to Shiloh where he set up the Tabernacle and assembled the people (see Joshua 18:1).

Seven tribes had not received their inheritance, and Joshua reproved them for not taking possession of the land. Three men were appointed from each tribe to survey the rest of the land and to divide it into seven lots. Six cities of refuge were appointed by the people themselves, three on the western side of Jordan and three on the eastern side (Joshua 20). The Levites received forty-eight cities and their surrounding villages, which were given up by the several tribes in proportion to the cities they possessed. The warriors of the trans-Jordanic tribes were then dismissed in peace to their homes (see Joshua 22).

In his old age, Joshua called all Israel to an assembly and delivered to them two solemn addresses concerning the marvellous fulfillment of God’s promises to their fathers. He warned them of the conditions upon which their property depended and caused them to renew their covenant with God at Shechem.