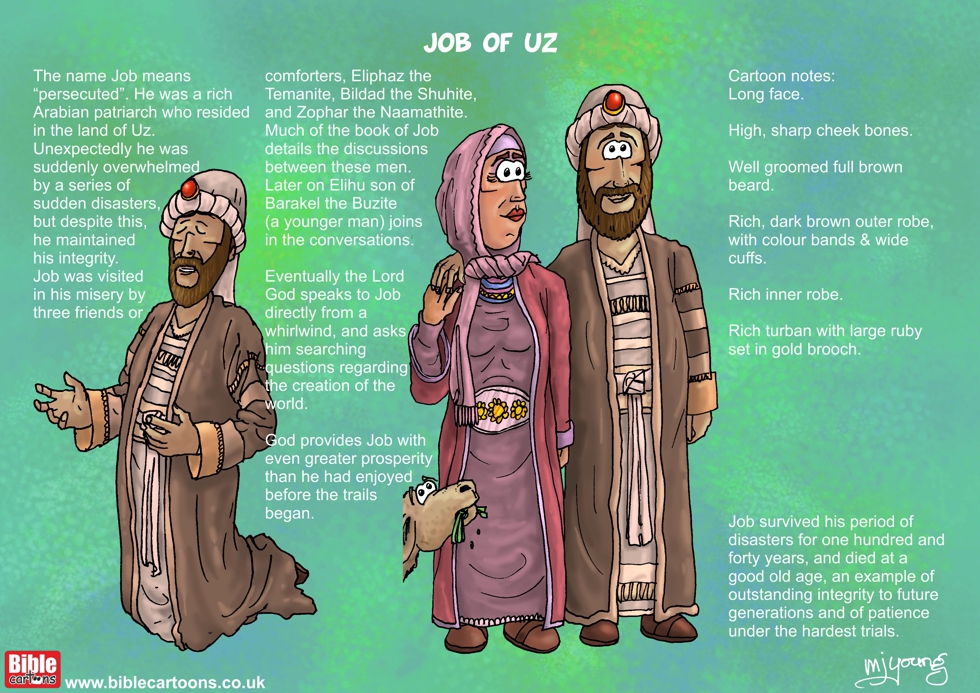 This is my character sheet, or design specification, for Job. The purpose of this sheet is to keep a record of the attributes or characteristics of my drawing, so that I can draw a similar-looking cartoon in all future scenes showing Job.

I first drew my version of Job in April 2010, with the scene “Job 38 – Job and the whirlwind”. In that drawing, Job (& his friends) appear in very simple clothing. I have recently (2022) started drawing Job in the first chapters of the book of Job, and have made him look a lot wealthier, in terms of his clothing. So, although my style has changed a bit since that early cartoon, I try to maintain the same facial features, colouring and clothing style, so that the figure is recognizably that of Job, even when months or years have elapsed between drawings.

The book of Job
The Book of Job, book of Hebrew scripture that is often counted among the masterpieces of world literature. It is found in the third section of the biblical canon known as the Ketuvim (“Writings”). The book’s theme is the eternal problem of unmerited suffering, and it is named after its central character, Job, who attempts to understand the sufferings that engulf him.

The Book of Job may be divided into two sections of prose narrative, consisting of a prologue (chapters 1–2) and an epilogue (chapter 42:7–17), and intervening poetic disputation (chapters 3–42:6). The prose narratives date to before the 6th century B.C. and the poetry has been dated between the 6th and the 4th century B.C. Chapters 28 and 32–37 were probably later additions.

The Book of Job’s artful construction accounts for much of its impact. The poetic disputations are set within the prose framework of an ancient legend that originated outside Israel. This legend concerns Job, a prosperous man of outstanding piety. Satan acts as an agent provocateur to test whether or not Job’s piety is rooted merely in his prosperity. But faced with the appalling loss of his possessions, his children, and finally his own health, Job still refuses to curse God. Three of his friends then arrive to comfort him, and at this point the poetic dialogue begins. The poetic discourses—which probe the meaning of Job’s sufferings and the manner in which he should respond—consist of three cycles of speeches that contain Job’s disputes with his three friends and his conversations with God. Job proclaims his innocence and the injustice of his suffering, while his “comforters” argue that Job is being punished for his sins. Job, convinced of his faithfulness and uprighteousness, is not satisfied with this explanation. The conversation between Job and God resolves the dramatic tension—but without solving the problem of undeserved suffering. The speeches evoke Job’s trust in the purposeful activity of God in the affairs of the world, even though God’s ways with man remain mysterious and inscrutable.
[Source: https://www.britannica.com/topic/The-Book-of-Job]