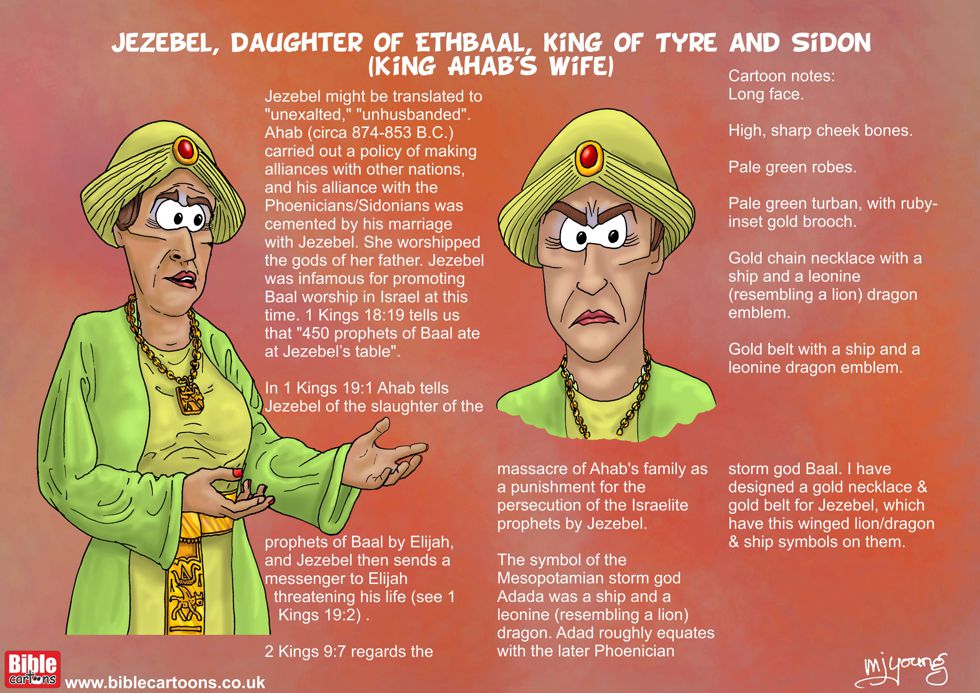 This is my character sheet, or design specification, for Jezebel – wife of Ahab, 8th king of the Northern Kingdom of Israel. The purpose of this sheet is to keep a record of the attributes or characteristics of my drawing, so that I can draw a similar-looking cartoon in all future scenes showing Jezebel. I have included a brief personal history on the sheet as well.

I first drew my version of Jezebel in January 2016, with the scene “1 Kings 17 – Elijah fed by ravens – Scene 01 – No rain”. Although my style has changed a bit since those early cartoons, I try to maintain the same facial features, colouring and clothing style, so that the figure is recognizably that of Jezebel, even when months or years have elapsed between drawings. In that first drawing I decided to have Jezebel wear a sickly, green coloured dress and turban. The choice of colour reflecting Jezebel’s poisonous character & toxic effect on the king (Ahab) & the nation of Israel.

Personal History
The name Jezebel might be translated as “unexalted,” or “unhusbanded” or “chaste”. She was the daughter of Ethbaal, king of the Sidonians (i.e. Phoenicians), & was married to king Ahab as part of a peace treaty between Israel & Sidon (see 1 Kigs 16:31).

Jezebel was very influential in encouraging Ahab to further pollute Israel with foreign idol worship, namely that of Baal-

Jezebel was the first great instigator of persecution against the prophets of God. 450 prophets ministered under her care to Baal, besides 400 prophets of Asherah. She opposed the prophet Elijah, and threatened to kill him after her prophets were killed on Mount Carmel (see 1 Kings 18:16-40).

Jezebel had naboth killed so that her husband Ahab might take possession of his vineyard, near the Samarian capital city 9see 1 Kings 21:1-16).

2 Kings 9:30-37 recounts the grisely death of Jezebel, at the hands of her 2-3 eunuchs, who threw her down from an upper window. She was dashed to pieces on the street & was immediately consumed by the dogs of the street, which was in accordance with the prophecy of Elijah the Tishbite regarding her death (see 1 King 21:19).

In Revelation her name afterwards came to be used as the synonym for a wicked woman (see Revelation 2:20).