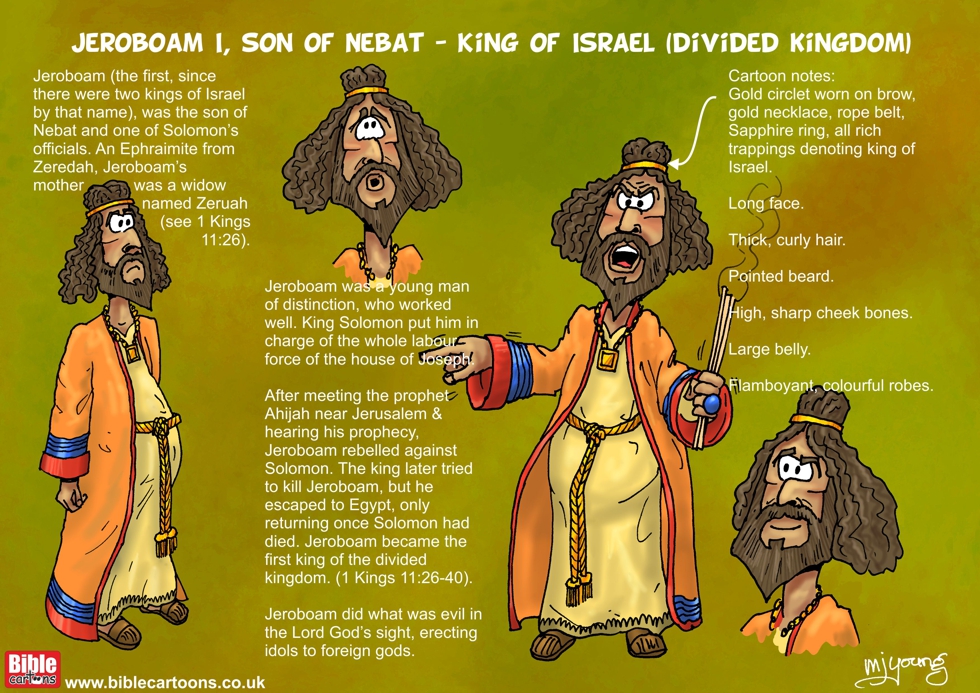 This is my character sheet, or design specification, for Jeroboam, son of Nebat, first king of the Northern Kingdom of Israel. The purpose of this sheet is to keep a record of the attributes or characteristics of my drawing, so that I can draw a similar-looking cartoon in all future scenes showing Jeroboam, son of Nebat. I have included a brief personal history on the sheet as well. I first drew my version of Jeroboam, son of Nebat in July 2020, with the “1 Kings 13 - Prophet and lion - Scene 01 - Prophecy against the altar” picture. Personal History Jeroboam (the first, since there were two kings of Israel by that name), was the son of Nebat, and was one of Solomon’s officials, an Ephraimite from Zeredah, who’s mother was a widow named Zeruah (see 1 Kings 11:26). Verse 28 of 1 Kings 11 informs us that Jeroboam was a young man of standing, who did his work well. Clearly his reputation was well deserved, since King Solomon put him in charge of the whole labour force of the house of Joseph. The story of Jeroboam’s rebellion against Solomon, after meeting the prophet Ahijah in the countryside near Jerusalem, can be read in 1 Kings 11:26-40. In verse 40 the Bible tells us that king Solomon tried to kill Jeroboam, but he escaped to Egypt, only returning to Israel once Solomon had died. At this time the kingdom of Israel split into two: ten of the tribes forming one half, and only the tribes of Judah and Benjamin remaining loyal to the house of David. Jeroboam lead his people away from the worship of God, and set up idols (2 golden calves) instead. Jeroboam built shrines to foreign gods on hill tops, and appointed anyone who wanted to, to become priests, even if they weren’t Levites (people from the tribe of Levi, whom God appointed as Israel’s priests). Whilst worshipping at the altar he had built at Bethel, an un-named man of God from Judah confronted him (see 1 Kings chp 13). Jeroboam’s hand was paralyzed as he stretched it out towards the man of God, but after praying for him, Jeroboam’s hand returned to normal. Jeroboam reigned for 22 years, and during that time he led the people towards the eventual destruction of the Northern kingdom. A simple, succinct phrase (from the prophet Ahijah) informs us of God’s view of Jeroboam’s deeds and nature, “You have done more evil than all who have lived before you.” (see 1 Kings 14:9). Jeroboam’s son Nadab succeeded him as king of Israel.
Return to BC Encylopaedia Index page