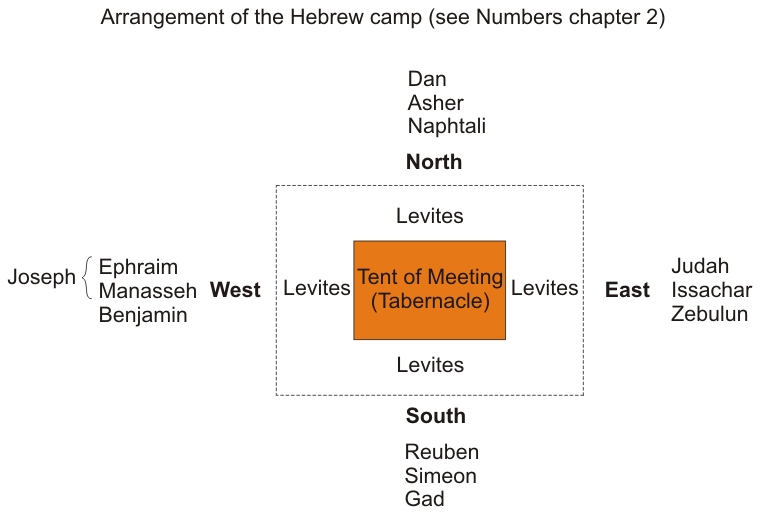 Here is the text in the Old Testament book of Numbers, which describes how the Lord arranged the Israelite camp…

Numbers 2:1-2 (ANIV)
The Lord said to Moses and Aaron: “The Israelites are to camp round the Tent of Meeting some distance from it, each man under his standard with the banners of his family.“

Clearly, from this text we see that each tribe, & probably each family had its own banner. There is no description in the Bible of what these tribal or family banners looked like. However, I thought it would be visually appealing to design 12 distinctive tribal banners (one for each son of Jacob), for my cartoons.

‘On the east… the divisions of the camp of Judah are to encamp under their standard… The tribe of Issachar will camp next to them… The tribe of Zebulun will be next.

On the south will be the divisions of the camp of Reuben under their standard… The tribe of Simeon will camp next to them…The tribe of Gad will be next.

On the north will be the divisions of the camp of Dan, under their standard…The tribe of Asher will camp next to them…The tribe of Naphtali will be next.’

Clearly, from the above text, the Lord organised the 12 tribes* of the Hebrew people. Above is a diagram showing this arrangement.

*For the observant amongst you, there are 13 tribes in the diagram, when you count them all up! However, there wasn’t a tribe called “Joseph.” His tribe was represented by his 2 sons, called Ephraim & Manasseh.

Follow this link to read the BC Encyclopaedia article which describes how I designed the clothing of the 12 sons of Jacob:
Jacob’s sons – Who’s who?! – Clothing notes