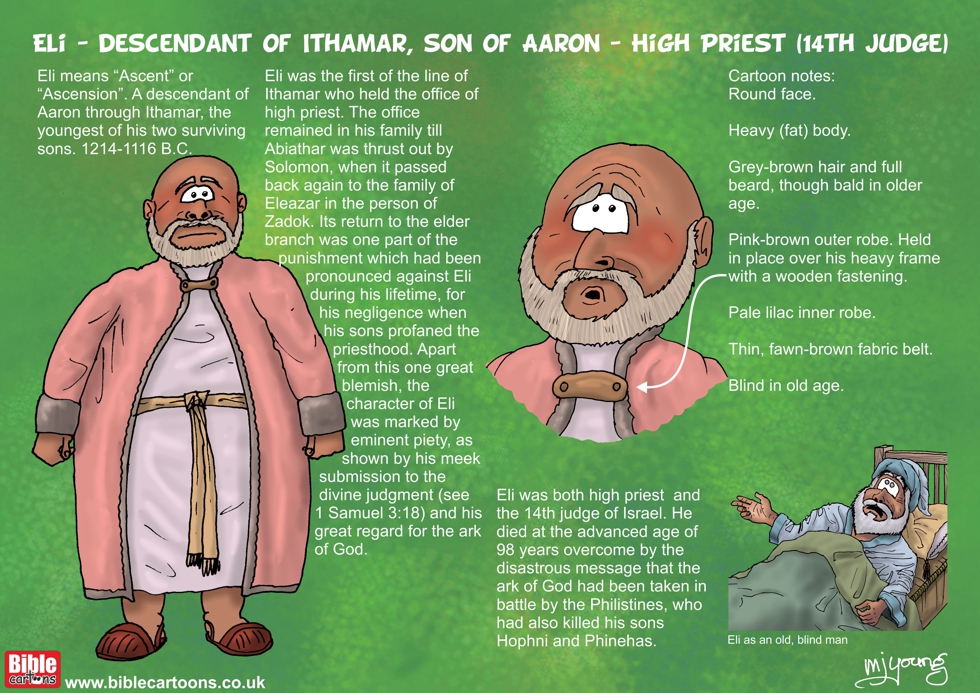 This is my character sheet, or design specification, for Eli, who was the last judge of Israel and High Priest.

The purpose of this sheet is to keep a record of the attributes or characteristics of my drawing, so that I can draw a similar-looking cartoon in all future scenes showing Eli. I have included a brief personal history on the sheet as well.

I first drew my version of Eli in May 2013, with the “1 Samuel 03 – Samuel’s childhood – Scene 06 – Eli’s advice to Samuel” picture. Although my style has changed a bit since those early cartoons, I try to maintain the same facial features, colouring and clothing style, so that the figure is recognizably that of Eli, even when months or years have elapsed between drawings.

Eli was a descendant of Aaron through Ithamar, the youngest of his two surviving sons. He was the first of the line of Ithamar who held the office of high priest. Eli was the 14th Judge of Israel (succeeded by Samuel, the 15th & last Judge)

The office of high priest remained in Eli’s family untill Abiathar, who was thrust out by king Solomon (see 1 King 1:7; 2:26, 27) when it passed back again to the family of Eleazar in the person of Zadok (see 1 Kings 2:35). This return to the elder branch was one part of the punishment which had been denounced against Eli during his lifetime, for his negligence in regard to the sinful behaviour of his two sons.

Despite this one great blemish on the character of Eli, his nature appears remarkable pious, as shown by his meek submission to the divine judgment (see 1 Samuel 3:18) and by his comment on the matter, “ “He is the Lord; let him do what is good in his eyes.”

He died at the advanced age of 98 years (see 1 Samuel 4:18), overcome by the disastrous battlefield report that the ark of God had been taken in battle by the Philistines, who had also slain his sons Hophni and Phinehas.