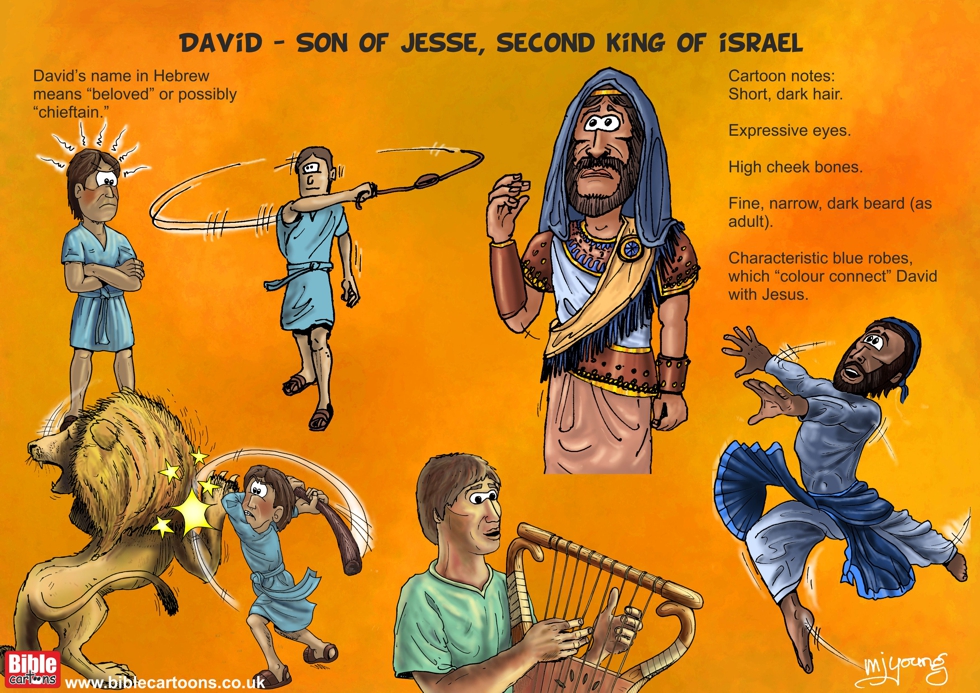 This is my character sheet, or design specification, for David – son of Jesse, 2nd king of Israel.

The purpose of this sheet is to keep a record of the attributes or characteristics of my drawing, so that I can draw a similar-looking cartoon in all future scenes showing David.

David, (flourished c. 1000 B.C.), second king of ancient Israel. He founded the Judaean dynasty and united all the tribes of Israel under a single monarch. His son Solomon expanded the empire that David built. David is an important figure in Judaism, Christianity, and Islam.

Background and sources
The primary evidence for David’s career consists of several chapters in the books 1 and 2 Samuel in the Hebrew Bible (Old Testament). The Psalms are also attributed to him, a tribute to his legendary skill as a poet and hymnodist. Material evidence for his reign, while a matter of intense debate among scholars, is scant. Some scholars claim to have discovered artifacts that corroborate the biblical account of David’s kingdom. Others assert that the archaeological record strongly suggests that David was not the grand ruler of a rising kingdom but merely a gifted tribal leader of a pastoral, rather than urban, society. A fragment from a stone stele mentioning the “House of David” (a reference to his political dynasty) was inscribed more than a century after the traditional date of his reign and is not accepted by all scholars. The following article is largely drawn from the biblical account of David’s reign.

Early life
The youngest son of Jesse, David began his career as an aide at the court of Saul, Israel’s first king. He so distinguished himself as a warrior against the Philistines that his resultant popularity aroused Saul’s jealousy, and a plot was made to kill him. He fled into southern Judah and Philistia, on the coastal plain of Palestine, where, with great sagacity and foresight, he began to lay the foundations of his career.

As an outlaw with a price on his head, David led the life of a Robin Hood on the desert frontier of his tribal domain in Judah (in the south of the Levant). He became the leader and organizer of a group of other outlaws and refugees, who progressively ingratiated themselves with the local population by protecting them from other bandits or, in case they had been raided, by pursuing the raiders and restoring the possessions that had been taken. Those actions eventually ensured that he would be “invited” to become king as the true successor of Saul after the latter was slain in battle against the Philistines on Mount Gilboa.

Kingship
According to the biblical account, David was proclaimed king in Hebron. He struggled for a few years against the contending claim and forces of Ishbaal, Saul’s surviving son, who had also been crowned king, but the civil war ended with the murder of Ishbaal by his own courtiers and the anointing of David as king over all of Israel. He conquered the Jebusite-held town of Jerusalem, which he made the capital of the new united kingdom and to which he moved the sacred Ark of the Covenant, the supreme symbol of Israelite religion. He defeated the Philistines so thoroughly that they were never again a serious threat to the Israelites’ security, and he annexed the coastal region. He went on to establish an empire by becoming the overlord of many small kingdoms bordering on Israel, including Edom, Moab, and Ammon.

David’s great success as a warrior and empire builder was marred by interconnected family dissensions and political revolts. To tie together the various groups that constituted his kingdom, David took wives from them and created a harem. The resultant family was an extreme departure from the family in the consanguineal context, the traditional clan structure. David’s wives were mostly completely alien to one another, and his children were without the directing support of established social patterns that provided precedents for the resolution of conflict or for establishing the rights of succession.

The authors of the biblical accounts (in 1 and 2 Samuel) of David’s political career display a deep insight into the character of a man who could make an indelible personal impression in a specific situation. Along with that ability to exploit the immediate situation in the service of his momentary requirements, he possessed the knack of making his conduct in particular situations serve his persistent and long-range aims.
[Source: https://www.britannica.com/biography/David]