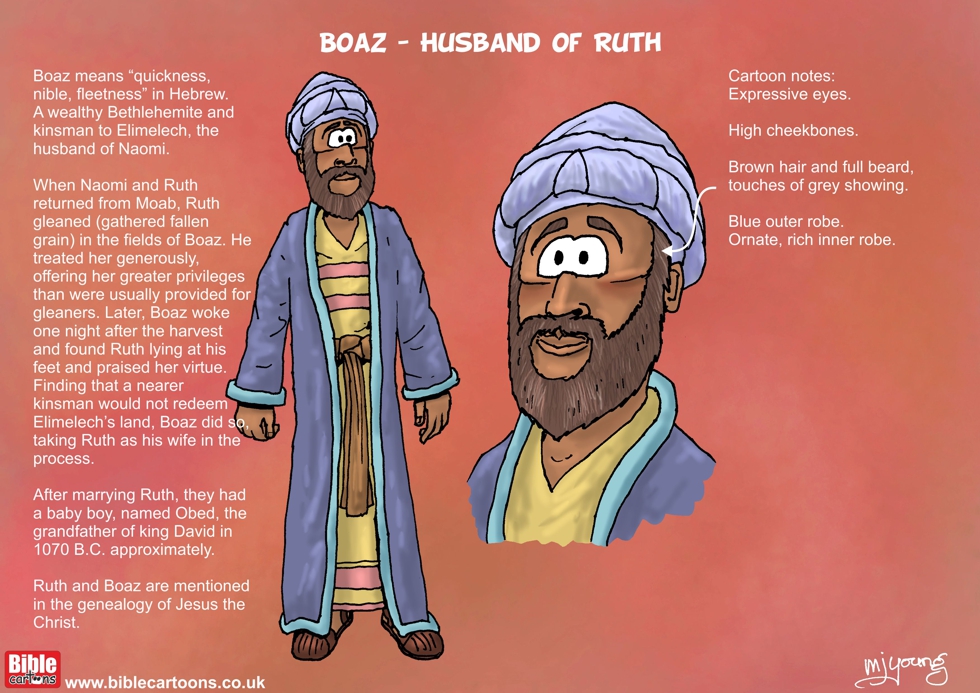 This is my character sheet, or design specification, for Boaz (kinsman of Mahlon, Ruth’s first husband (deceased)). The purpose of this sheet is to keep a record of the attributes or characteristics of my drawing, so that I can draw a similar-looking cartoon in all future scenes showing Boaz.

I first drew my version of Boaz in April 2017, with the “Ruth 02 – Harvesting – Scene 02 – Boaz arrives” picture, although in this scene he was a small figure in the background! I have drawn a larger version of Boaz in the scene “Ruth 02 – Harvesting – Scene 03 – Ruth and Boaz talk” in September 2020. Although my style has changed a bit over time, I try to maintain the same facial features, colouring and clothing style, so that the figure is recognizably that of Boaz, even when months or years have elapsed between drawings.

Personal History
The name Boaz can be translated as “quickness, fleetness and/or alacrity”

Boaz was a rich man; a resident of Bethlehem and a kinsman of Elimelech (Naomi’s husband). He owned fields outside Bethlehem, into which Ruth went to glean (gather grain from behind the harvest-gathering workers of Boaz).

Boaz noticed Ruth when he came to greet his harvesters (see Ruth 2:4). He treated her generously, offering her greater privileges (food, water, wine, shelter at meal times) than were usually offered to gleaners.

After consultation with her mother-in-law Naomi, Ruth lay at the feet of Boaz, upon a threshing floor. He praised her virtues (eg her faithfulness to Naomi), and promised to take charge of her if her dead husband’s next-of-kin (kinsman redeemer) failed to do so.

A little later, Boaz spoke to the kinsman-reedemer, who told him he was unable to redeem the estates of Ruth’s deceased husband (a man named Mahlon, who died in Moab). With full agreement from the kinsman-redeemer, Boaz redeemed the family property himself, obtaining in the process the right to take Ruth in marriage.

The son of Boaz and Ruth was Obed (born about 1070 B.C.), who became the father of Jesse, who’s son was king David, the 2nd king of the united Israel nation.

1 Chron. 2:11-12 indicates Boaz was a descendant of Hezron, and so may very probably he was a chief of the Hezronite clan of Bethlehem.

Boaz and Ruth are mentioned in the genealogy of Jesus the Christ (see Matt 1:5).