Bethlehem has a variety of names or spellings, some of which are: Beit Lahm, Beit Sahur, Bet Lehem, Betar, Beth-Lehem, Beth-lehem-ephratah, Bethlehemjudah, Bit-Lahmi, Ephratah & Ephrath. It is also know as “the City of David”.

The origins of Bethlehem.
Bethlehem of Judah [1] (hereafter simply referred to as “Bethlehem”) is located 5 miles (8 kilometers) south-southwest of Jerusalem with an elevation of 2500 feet (762 meters) above sea level. Situated within the hill country of the tribe of Judah, the village sits on part of a central mountain range that runs north-south through much of Israel.

The origins of Bethlehem are shrouded in mystery, but archaeological records show that it existed as far back as the 14th century B.C. The village was most probably established as an Israelite settlement (as apposed to a Canaanite (earlier) settlement) during the time of Judges, about 12th-11th centuries B.C. Excavations have shown evidence of Bronze and Iron Age settlements at the site.

The importance of water in relation to Bethlehem.
Water has always played a key role in Bethlehem’s history, since it sits on an enormous aquifer [2]. The “village” is, in fact, a collection of very fertile villages that grow almonds and olives (for oil). The area is very fertile because Bethlehem sits on the aquifer, which eventually became the water source for Jerusalem in around 200 B.C. Bethlehem was built to be a defensive military installation guarding the water supply and was deliberately sited on top of the aquifer to defend it.

In the end, there were so many Jewish pilgrims coming to Jerusalem that the city couldn’t cope with the demand, especially for water. It turns out that the older water supply was contaminated by the animals slaughtered in the temple, hence the need for fresh water, which came from Bethlehem.

Around 300 B.C. a reservoir was built to collect and store water. Over the course of history another three gigantic reservoirs were built (south of Bethlehem), which became known as Solomon’s Pools, which are still there today.

Bethlehem in the Bible.
01) Judean Bethlehem (Ephrath) is first mentioned in the Old Testament as the burial place of Rachel, the wife of the patriarch Jacob (see Genesis 35:19, Genesis 48:7), whilst 1 Chronicles 2:51 records that Salma (a grandson of Caleb) is called the “father of Bethlehem”, thereby being associated with the village’s Israelite beginnings.

02) Bethlehem was the home of an Ephraimite Levite and his concubine. The appalling story of her rape and murder sparked an intertribal war that nearly destruction the small tribe of Benjamin (see Judges chp 19-20).

03) King David was born in the village of Bethlehem, and the village had a close association with the Davidic monarchy.

03) In the book of Ruth, Elimelek, his wife Naomi, and their two sons Mahlon and Kilion, were all from Bethlehem. After migrating to Moab to survive a famine in Israel, Naomi returned to Bethlehem from Moab with her widowed daughter-in-law Ruth. Naomi’s daughter-in-law soon married Naomi’s kinsman-redeemer, a wealthy and influential man named Boaz. In chapter 4 we discover that Boaz and Ruth were the ancestors of King David (Ruth 4:17-22), and therefore of Jesus the Christ. Ruth is one of 4 women mentioned in Matthew’s gospel as being ancestors of Jesus’ human lineage.

05) In the war between the houses of Saul and David, Asahel is killed by Abner, and later buried in his father’s tomb, in Bethlehem (see 2 Kings chp 2 for this interaction).

06) In the postexilic (ie after the exile to Bablylon/Assyria) period, the prophet Micah prophesied that God was going to raise up a new Davidic king from the city of Bethlehem (see Micah 5:2). From this we conclude that the little village of Bethlehem was not only the place where king David’s reign began, but also from which a new Davidic king would again come (meaning the Messiah, Jesus the Christ).

07) According to Matthew and Luke chp 2, Jesus was born in the village of Bethlehem.

[1]
Note that there is another “Bethlehem”, located in Galilee, a village in the tribal territory of Zebulun (see Josh 19:15).

[2]
An aquifer is an underground layer of water-bearing permeable rock, rock fractures or unconsolidated materials (gravel, sand, or silt). Groundwater can be extracted using a water well. 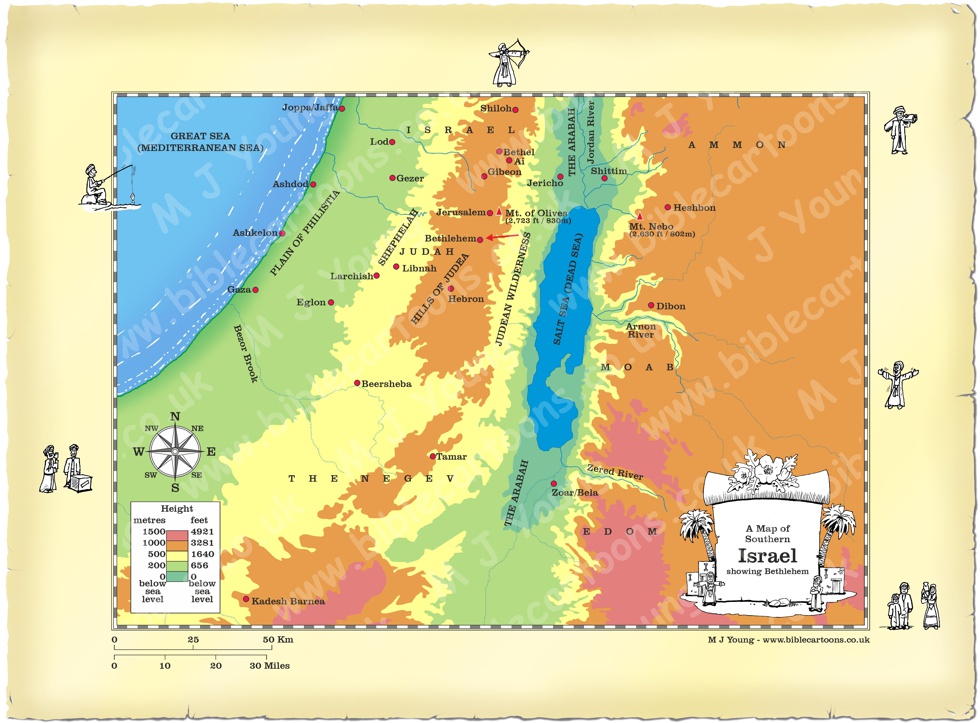 Link to related Map
Click blue bar below to see a Map showing the location of Bethlehem, with purchase option:
View/Buy Map