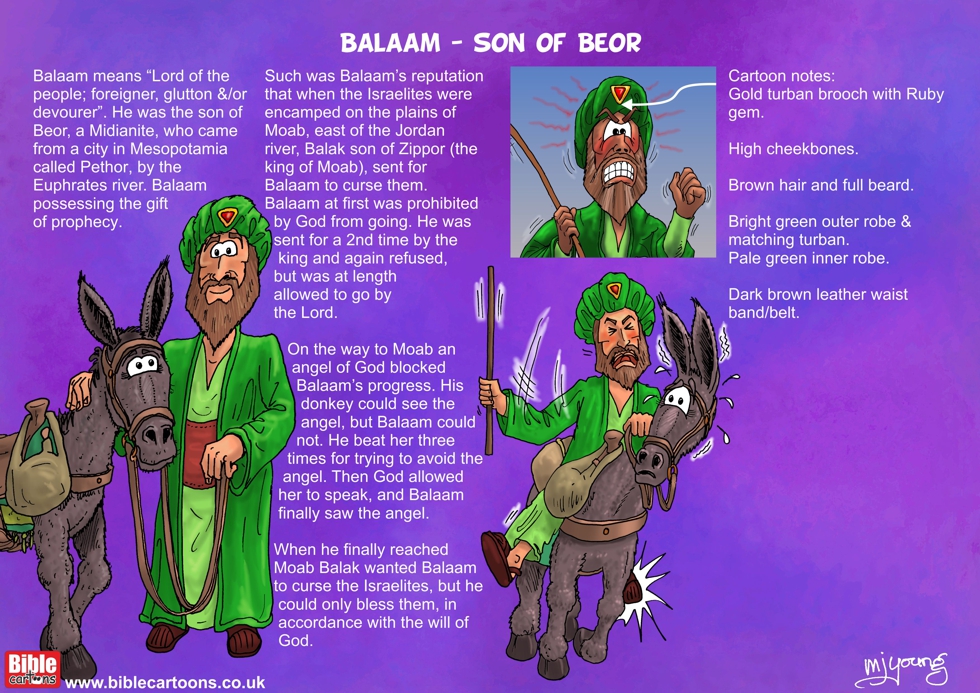 This is my character sheet, or design specification, for Balaam – son of Beor. The purpose of this sheet is to keep a record of the attributes or characteristics of my drawing, so that I can draw a similar-looking cartoon in all future scenes showing Balaam.

My first drawing of Balaam (in May 2014) was drawn for one of my “Bad day” mugs, although it never actually got used in the end. I am currently (May 2021) adding the rest of the scenes to complete the set which shows Balaam’s donkey, from Numbers chp 22.

Personal History
The name Balaam means “Lord of the people; foreigner, glutton &/or devourer”. He was the son of Beor, a Midianite, who came from a city in Mesopotamia called Pethor, by the Euphrates river. Balaam possessing the gift of prophecy. Such was Balaam’s reputation that when the Israelites were encamped on the plains of Moab, east of the Jordan river, Balak son of Zippor (the king of Moab), sent for Balaam to curse them. Balaam at first was prohibited by God from going. He was sent for a 2nd time by the king and again refused, but was at length allowed to go by the Lord. On the way to Moab an angel of God blocked Balaam’s progress. His donkey could see the angel, but Balaam could not. He beat her three times for trying to avoid the angel. Then God allowed her er to speak, and Balaam finally saw the angel for himself. When he finally reached Moab Balak wanted Balaam to curse the Israelites, but he could only bless them, in accordance with the will of God.