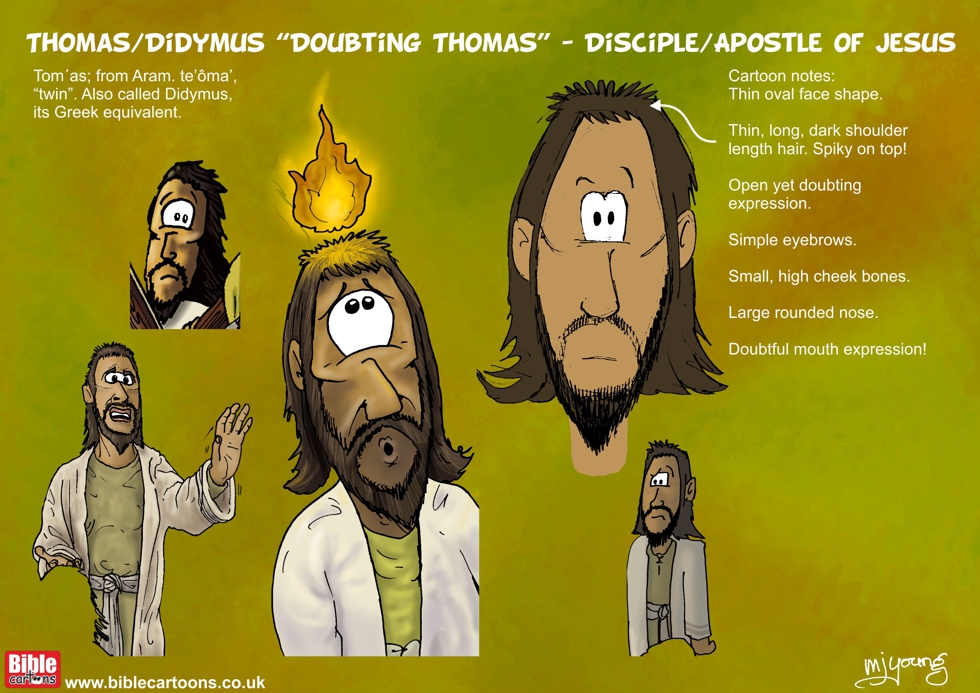 This is my character sheet, or design specification, for the apostle Apostle Thomas/Didymus “Doubting Thomas”, which is a different person to Philip the Evangelist. The purpose of this sheet is to keep a record of the attributes or characteristics of my drawing, so that I can draw a similar-looking cartoon in all future scenes including Apostle Thomas/Didymus “Doubting Thomas”.

I first drew my version of Apostle Thomas/Didymus “Doubting Thomas” in March 2009, very early on in the history of Bible Cartoons. Those early pictures were for stories found in John’s gospel.

By formalising my ideas on a character design sheet in this way I would have a simple and accessible design reference point, which would remind me of what I had drawn in previous cartoons. By referring to this sheet every time I drew a scene including Apostle Thomas/Didymus “Doubting Thomas” I hoped I would be able to draw and colour him to match previous cartoons, ensuring great similarity and therefore continuity between Bible Cartoons featuring Apostle Thomas/Didymus “Doubting Thomas”, even if these cartoons were drawn months or even years apart.

Without this character sheet to refer to I might very well accidentally draw a scene where the Apostle Thomas/Didymus “Doubting Thomas” character is quite different from previous drawings, which would be a problem if someone views and/or buys several Bible Cartoons and the same person looks quite different in each scene! There is a very real danger of this happening since my abilities and style gradually change and evolve over time, especially as I learn new art techniques and want to incorporate new ideas into my Bible Cartons. By referring to the character sheet I can be confident that I will draw a similar-looking person, even if my artistic skills have undergone change and development over time.

Personal History
Tom´as; from Aram. te’ôma’, “twin”. Also called Didymus, its Greek equivalent.
Despite the name “twin” there is no Biblical evidence of a twin to Thomas. He is said to have been born in Antioch, but is also considered by some a native of Galilee, like most of the other apostles (John 21:2).

When Jesus declared His intention of going to Bethany after Lazarus’s death, Thomas, apprehensive of danger, said to the other disciples, “Let us also go, that we may die with Him” (John 11:16).

Thomas was absent when Jesus first appeared to his disciples/apostles after his resurrection and doubted their witness. When Jesus returned again, Thomas was present, putting his finger in the wounds on Jesus’ body: all doubt was then removed.