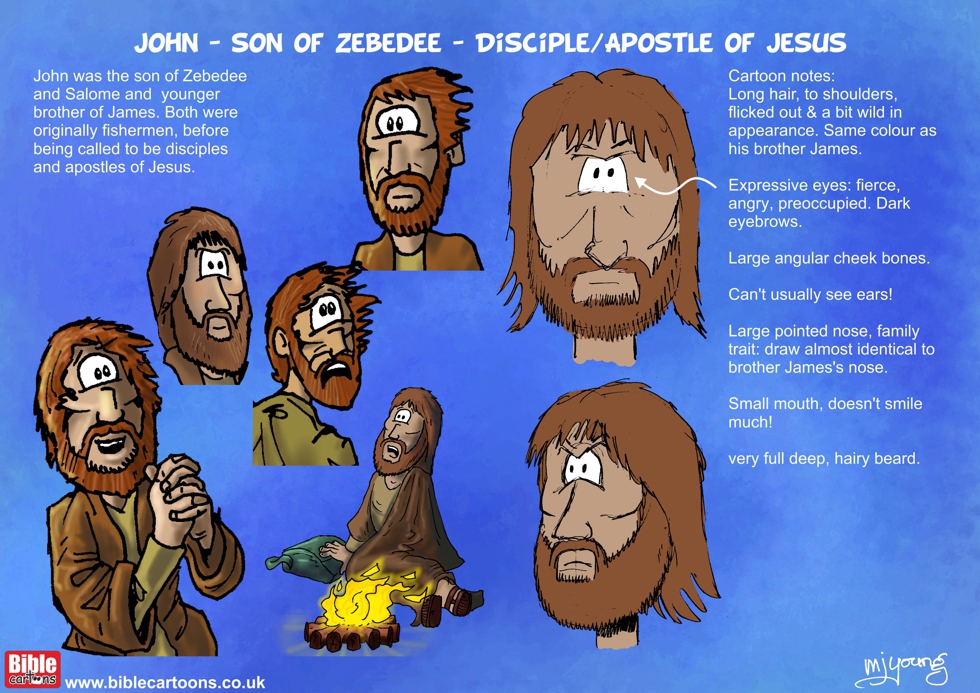 I first drew my version of John (son of Zebedee) in March 2009, very early on in the history of Bible Cartoons. Those early pictures were for stories found in John’s gospel.

By formalising my ideas on a character design sheet in this way I would have a simple and accessible design reference point, which would remind me of what I had drawn in previous cartoons. By referring to this sheet every time I drew a scene including John (son of Zebedee) I hoped I would be able to draw and colour him to match previous cartoons, ensuring great similarity and therefore continuity between Bible Cartoons featuring John (son of Zebedee), even if these cartoons were drawn months or even years apart.

Without this character sheet to refer to I might very well accidentally draw a scene where the John (son of Zebedee) character is quite different from previous drawings, which would be a problem if someone views and/or buys several Bible Cartoons and the same person looks quite different in each scene! There is a very real danger of this happening since my abilities and style gradually change and evolve over time, especially as I learn new art techniques and want to incorporate new ideas into my Bible Cartons. By referring to the character sheet I can be confident that I will draw a similar-looking person, even if my artistic skills have undergone change and development over time.

Personal History
John was the son of Zebedee and Salome and younger brother of James. Both were originally fishermen, before being called to be disciples and apostles of Jesus.

Jesus gave the brothers the name “Boanerges” which means “sons of thunder” probably due to their burning and impetuous spirit.