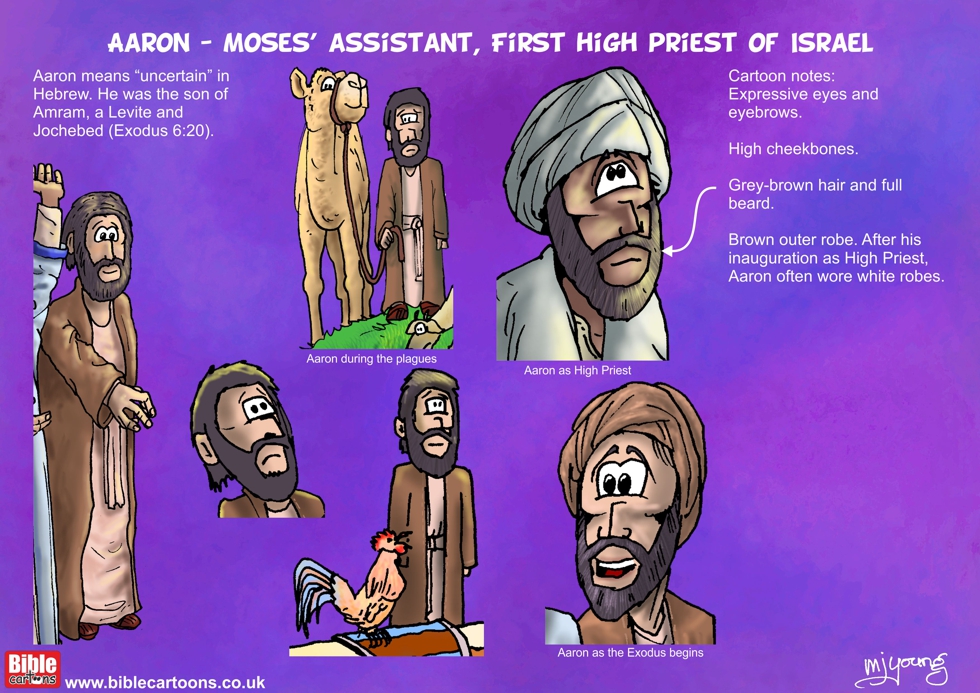 This is my character sheet, or design specification, for Aaron. The purpose of this sheet is to keep a record of the attributes or characteristics of my drawing, so that I can draw a similar-looking cartoon in all future scenes showing Aaron.

I first drew my version of Aaron in June 2009, with the “Exodus 32 – Golden calf” picture. He then appeared in a few of the plagues of Egypt pictures, then in the scenes relating the narrative of the Exodus. Although my style has changed a bit since those early cartoons, I try to maintain the same facial features, colouring and clothing style, so that the figure is recognizably that of Aaron, even when months or years have elapsed between drawings.

Personal History
Aaron means “uncertain” in Hebrew. The son of Amram, a Levite and Jochebed (Exodus 6:20) and the first high priest of Israel.

Aaron was the older brother of Moses by three years (Exodus 7:7). He was younger than their sister Miriam.

Aaron’s wife was Elisheba, the daughter of Amminadab, by whom he had four sons: Nadab, Abihu, Eleazar, and Ithamar (Exodus 6:23).

Aaron was eloquent of speech and divinely appointed to be Moses’ mouthpiece (prophet) (Exodus 4:16).

Aaron witnessed the plagues of Egypt that led to the Hebrew people’s Exodus from that country. Later, in the battle with Amalek, Aaron and Hur held up Moses’ arms, which held the official rod, bringing victory to Israel.

While Moses was on Mt Sinai, Aaron made a golden calf idol, in a moment of weakness and under pressure from the people (Exodus 32:4), who worshipped it.

The tribe of Levi was consecrated as the priestly caste, and Aaron was appointed as high (Hebrew “great”) priest; his sons and descendants priests about 1440 B.C. (Leviticus 8:6).

An attestation of Aaron’s divine priestly appointment was the budding of his staff (Numbers 17:10).

Aaron shared Moses’ sin at Meribah (Numbers 20:8-13, 24) and consequently was not allowed to enter the Promised Land. He died soon afterwards on Mt. Hor at the borders of Edom (Numbers 20:22-29).