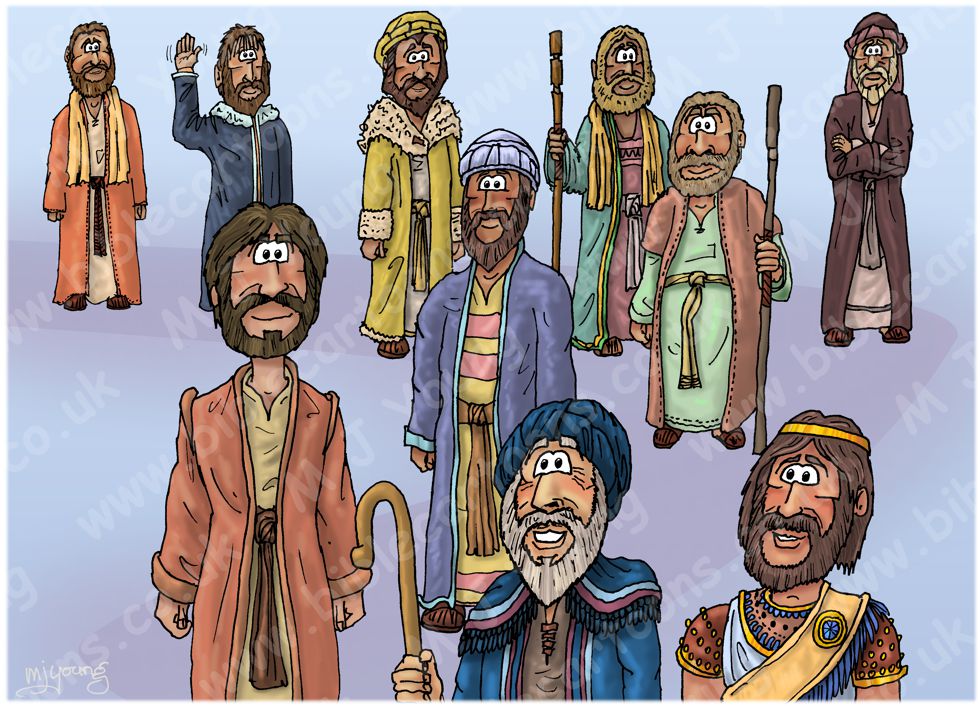 TIME OF DAY:
Unspecified in Bible verses above.

LIGHTING NOTES:
Sun above & to the left lights this scene.

RESEARCH/ADDITIONAL NOTES:
The 10 men named in the above genealogy appear in order, starting from the top left, running in a “Z” shape. From left to right, the first five names/men are Perez, Hezron, Ram, Amminadab, Nahshon. The next three men, Salmon/Salma, Boaz, Obed form the middle of the “Z” shape, running diagonally right to left. Jesse and David (at the bottom of the page), running left to right complete the “Z” shape (see diagram below).
I have made the “Z” pathway quite subtly coloured, below the figures, so as not to detract from them.

“Who’s who?”
Here’s the scene with a name overlay, to help you identity who’s who in this scene. 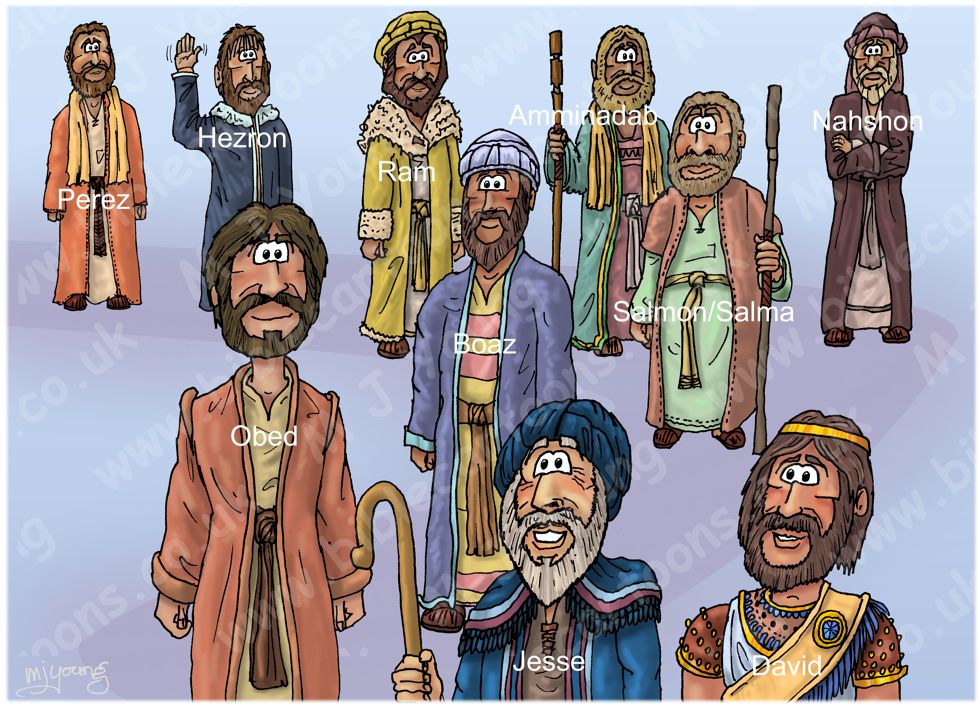 Below are some notes regarding the 10 men mentioned in the above genealogy. The notes are taken from New Unger’s Bible Dictionary.

Amminadab, meaning “people of liberality” or “my people (or my kinsmen) is generous or noble”.
Son of Ram (Aram, KJV of Matthew 1:4) and father of Nahshon (Naason, KJV of Luke 3:32) who was head of the tribe of Judah at the first numbering of Israel in the second year of the Exodus (Numbers 1:7; Numbers 2:3), about 1440 B.C. He was the fourth in descent from Judah, the sixth in ascent from David (Ruth 4:19-20; 1 Chron. 2:10), and one of the ancestors of Jesus Christ (Matthew 1:4; Luke 3:33; KJV renders Aminadab). He is probably the same Amminadab whose daughter Elisheba was married to Aaron (Exodus 6:23).

Boaz, possibly meaning “quickness”, “fleetness” from Arab. ba‘aza, “to be nimble”; “alacrity”.
A wealthy Bethlehemite, kinsman to Elimelech, the husband of Naomi. When Naomi and Ruth returned from the country of Moab the latter received permission to glean in the fields of Boaz. He treated her generously, offering her much greater privileges than were usually accorded to gleaners. Finding that the kinsman of Ruth, who was more nearly related to her, would not marry her according to the “levirate law,” Boaz voluntarily assumed that law’s obligations. He married Ruth, and their union was blessed by the birth of Obed, the grandfather of David (Ruth 1-4), about 1070 B.C.

David from a root word meaning “to love”, “beloved” or possibly “chieftain”.
David’s name in Heb. means “beloved” or possibly “chieftain,” as evidence from the Mari Letters indicates. Reference in these tablets to the plundering “Benjamites” is indicated by the word dawîdum (“leader”), but the connection between that term and Israel’s most famous king is conjectural. He was born in Bethlehem, the youngest son of a sheikh of that town named Jesse (1 Samuel 16:1). Apparently David had seven older brothers (1 Samuel 16:10)…[There are a lot more notes regarding David in the New Unger’s Bible Dictionary, which I have not included here.]
[Source: New Unger’s Bible Dictionary]