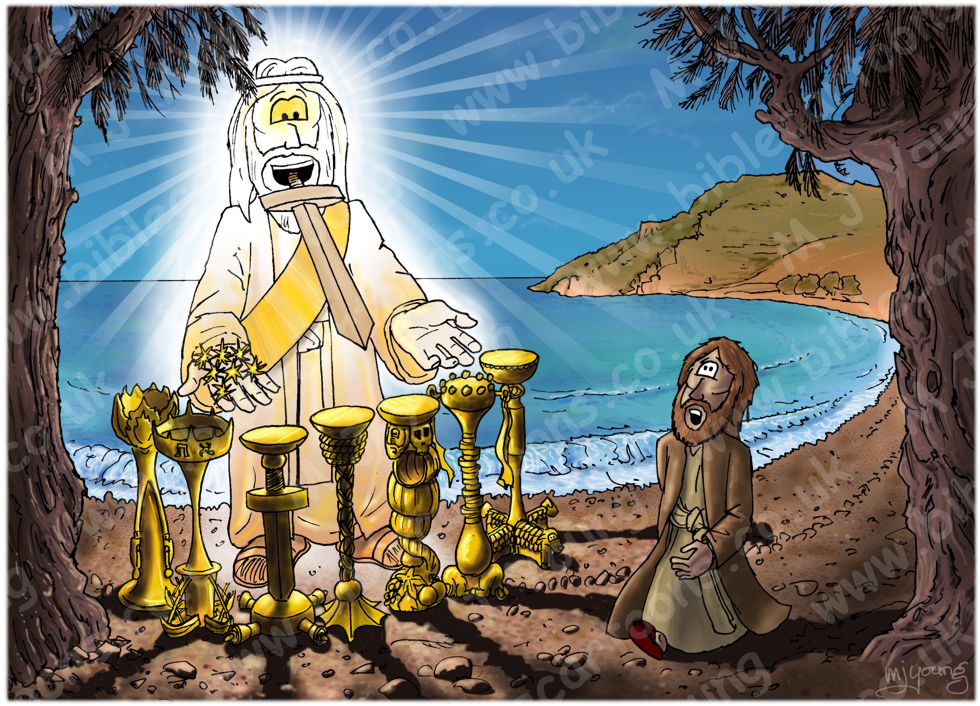 Revelation 1:9-16 (NLT)
Vision of the Son of Man
9 I, John, am your brother and your partner in suffering and in God’s Kingdom and in the patient endurance to which Jesus calls us. I was exiled to the island of Patmos for preaching the word of God and for my testimony about Jesus. 10 It was the Lord’s Day, and I was worshiping in the Spirit. [1] Suddenly, I heard behind me a loud voice like a trumpet blast. 11 It said, “Write in a book [2] everything you see, and send it to the seven churches in the cities of Ephesus, Smyrna, Pergamum, Thyatira, Sardis, Philadelphia, and Laodicea.”
12 When I turned to see who was speaking to me, I saw seven gold lampstands. 13 And standing in the middle of the lampstands was someone like the Son of Man. [3] He was wearing a long robe with a gold sash across his chest. 14 His head and his hair were white like wool, as white as snow. And his eyes were like flames of fire. 15 His feet were like polished bronze refined in a furnace, and his voice thundered like mighty ocean waves. 16 He held seven stars in his right hand, and a sharp two-edged sword came from his mouth. And his face was like the sun in all its brilliance.

LIGHTING NOTES:
The main light source for this scene is the glow from The Son of Man: Jesus Christ.

CHARACTERS PRESENT:
The Apostle John (son of Zebedee and brother of James). The Son of man (Jesus Christ.)

RESEARCH/ADDITIONAL NOTES:
The account tells us the Apostle John was on Patmos Island, Greece, which is a small Greek island in the Aegean Sea. I have set the scene on Psili Amos beach, which is in the South West corner of the island.

The account says that John was praying in the spirit. Tradition has it that John was in a cave when he received his Revelation (the Cave of the Apocalypse – about 2.5 Miles (4.03 Km) North of Psili Amos beach), but I have him walking along the beach – that’s surely a nicer place to pray!

Some months ago I designed the 7 gold lamp stands that stand before the glowing The Son of man (Jesus Christ) in this scene. Each lamp stand is designed to reflect the nature of the town or city it represents, for instance, the third one from the left represents the city of Pergamum: the base of the lampstand is a disc of manna bread (see Revelation 2:17), with 4 parchment scolls forming the stand’s feet. Pergamum was a city with a library of 200,000 parchment scolls, in fact, the name “parchment” was derived from the the name of the town, Pergamos. Above the manna bread is the two-edged sword The Son of Man mentioned in Revelation 2:12. The pommel of the sword is the white stone mentioned in Revelation 2:17.

The 7 gold lamp stands are not described anywhere in the Bible, so we do not know what they looked like. Rather than just have one, all-purpose lamp stand, I decided to design each one to represent some aspect of the history of the town or city it refers to.

There is a great deal of symbolism in apocalyptic writing, but it’s interpretation & explanation will have to wait for either another cartoon, or some other article on this website! 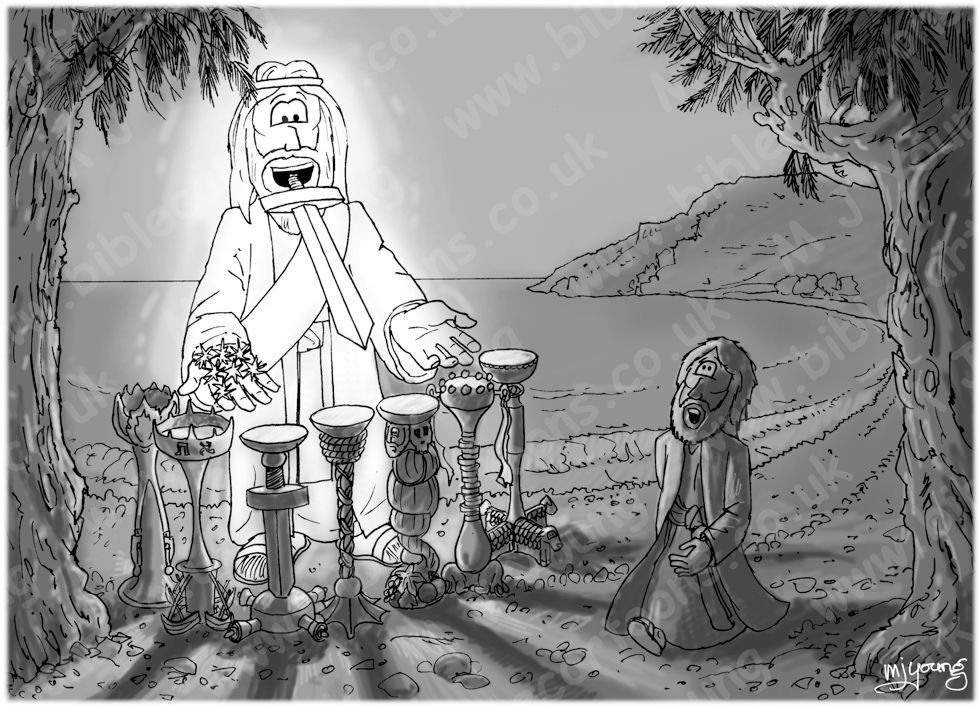