Bible Cartoon: Psalm 19 - Scene 02 - Nothing hidden from the sun’s heat 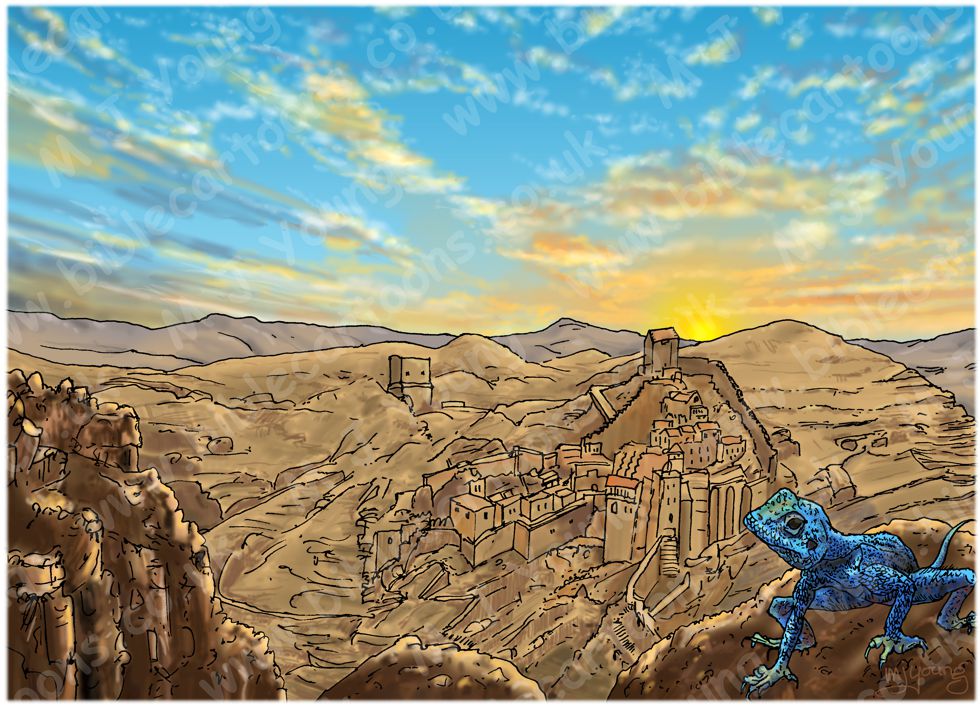 Psalms 19:4b-6 (ANIV)
In the heavens he has pitched a tent for the sun,
5 which is like a bridegroom coming forth from his pavilion,
like a champion rejoicing to run his course.
6 It rises at one end of the heavens
and makes its circuit to the other;
nothing is hidden from its heat.

RESEARCH/ADDITIONAL NOTES:
Psalm 19 is an example of a Hymn, which lift the congregations praise to God, describing God’s greatness & majesty.

Initially I thought of drawing a hot, dry desert scene, which most obviously illustrates the end of verse 6, “nothing is hidden from its heat.” However, I decided to include houses clinging to a mountainside instead. The dwellings in my scene are reminiscent of the monasteries of Mar Saba and St George in the Judean Desert, Israel. rather than have the sun high in the sky (& out of sight!) I decided to illustrate a sunrise instead.

The bright blue lizard in the bottom right of the picture (added for foreground interest!) is a male Pseudotrapelus sinaitus (aka Sinai agama). Juveniles & the female of the species are greyish-brown all year round, but the male takes on this amazing bright blue colour during the breeding season. Female Sinai agama often have a crescent-shaped red patch on each side just behind the forelimbs.

The length of the lizard including its long slender tail is 7 inches (18 cm), the tail making up to two-thirds of its total length. The limbs and tail are long and thin and allow for excellent climbing and running capability. Being ectothermic (”cold-blooded”) this lizard will often bask in the sun to warm its body. Once warmed up, any alarm or attempt at predation causes them to dash off at great speed. However, if their body temperature is lower, their body metabolism is lower as well, and they are incapable of these sudden bursts of speed. Under these circumstances their instinct is to stand their ground and attack their aggressor.

Sinai agama is most active during the daytime and feeds on insects and other arthropods and plants.

[1]
agamid = of the Agamidae family of over 300 species of iguanian lizards indigenous to Africa, Asia, Australia, and a few in Southern Europe. Many species are commonly called dragons or dragon lizards.
[Source: https://en.wikipedia.org/wiki/Sinai_agama]