Bible Cartoon: Psalm 15 - Lord, who may dwell in your sanctuary? 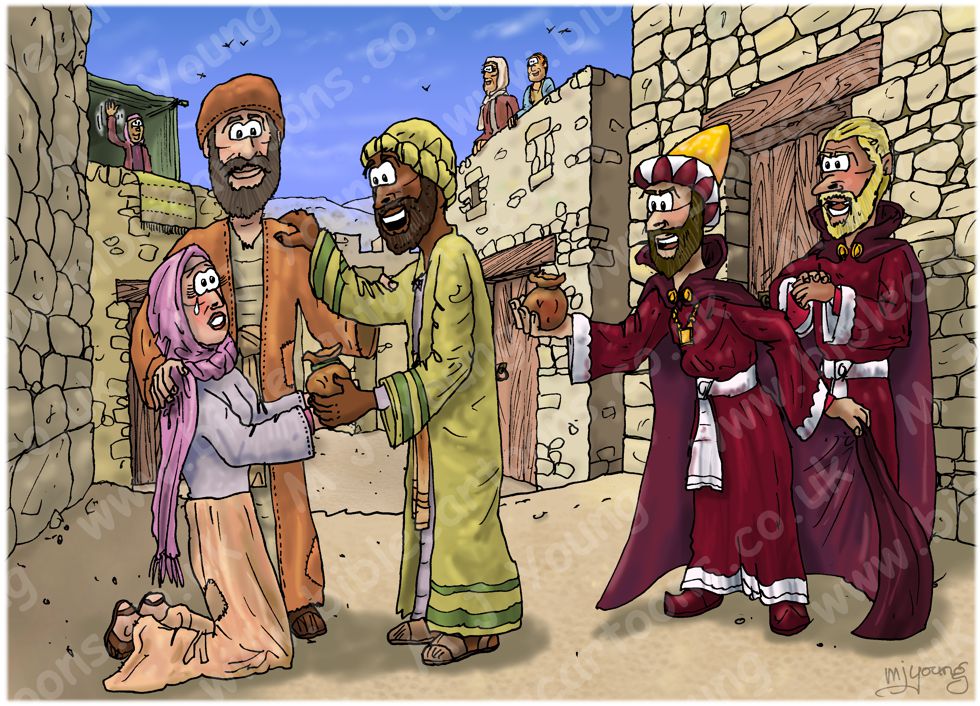 Lord, who may dwell in your sanctuary?
Who may live on your holy hill?

2 He whose walk is blameless
and who does what is righteous,
who speaks the truth from his heart
3 and has no slander on his tongue,
who does his neighbour no wrong
and casts no slur on his fellow-man,
4 who despises a vile man
but honours those who fear the Lord,
who keeps his oath
even when it hurts,
5 who lends his money without usury
and does not accept a bribe against the innocent.

He who does these things
will never be shaken.

TIME OF DAY:
Unspecified in Bible Text. I have set the scene in the late morning.

LIGHTING NOTES:
Warm sunlight from high above and left illuminates this scene. Shadows are cast to the right of objects and people.

CHARACTERS PRESENT:
The man in the centre of the picture is giving a leather bag of money to a couple in front of him.
Behind the trio are two men in ornate dark purple robes. They are trying to tempt the wealthy man with a bribe to give false evidence in court.

RESEARCH/ADDITIONAL NOTES:
Psalm 15 is an example of one of only 2 Entrance ceremony psalms (the other being Psalm 24), which provide questions and answers to teach the expectations God has of his worshippers.

The man in the centre of the picture is wealthy; at least richer in monetary means than the poor couple before him. He’s giving a leather bag (containing money) to the poorer couple. I have shown that the man and woman are poor by given them patched clothing. Notice that the wife of the pair is kneeling in gratitude to the man giving her the pouch of money, whilst her husband (in rust coloured clothing) is gripping the wealthy man’s arm in a gesture of friendship and thankfulness. This little tableau represents the phrase in verse 5, “who lends his money without usury (a word meaning not charging any interest on a loan)…”. Clearly the man in green robes is an upright, righteous, good man.

Behind the trio are two men in ornate dark purple robes. They are personifications of the second part of that verse, “…and does not accept a bribe against the innocent.” These rotten, evil men are trying to offer a bag of money (a bribe) to the man in green, to do just that, but he is deliberately ignoring them! What a kind, upright man he is!

This psalm explains who (if anyone!) is worthy to be a “guest” of the Lord. The psalmist (king David) outlined the flawless character of someone who could visit the Lord’s sanctuary, and is fit to worship there.

The Lord’s sanctuary (the Tabernacle), was located on the holy hill, (aka Zion, the City of David) (see 2 Samuel. 6:10-12, 17). In verse 1, king David pondered the matter of who would be fit to dwell in the presence of God. This is a spiritual question: who can draw near to God and worship where He is?

David’s answer is given in verses 2-5, where he outlined who and what the righteous would be. David answers his own question in summary form first, then elaborates on his answer after that. David realised that the acceptable person is one whose walk is 1) blameless; whose actions are 2) righteous. By the way, the metaphor of the “walk” is used often in the Bible, and represents a person’s pattern of life and conduct.

The Hebrew word “tamm” (which means blameless in english), refers to someone who is complete, sincere, or perfect. A blameless person has integrity and lives in obedience to God’s wishes and commands. A person whose actions are aligned perfectly with God’s standards, is considered a righteous soul. David declares in his Psalm that someone going into the presence of the Lord in Zion must be obedient and righteous. In contrast, the wicked and the hypocritical do not belong there.

After the general statement in the first two lines of verse 2, David explains what a flawless person’s character would be like.

The first characteristic of the righteous person is that he/she will speak truth sincerely; honesty is vital.

The second characteristic of a righteous person is that they do not slander maliciously.

Thirdly, they will do no harm and fourthly they will not discredit a neighbour. A blameless individual’s remarks do not harm or destroy any neighbour.

Fifthly, a righteous person despises… vile people and honours fellow believers, who fear the Lord; one who fears the Lord is living a life of obedience and faith. The Hebrew word “ma?as” which we translate as is a worthless reprobate.

Sixthly, a righteous person keeps his oath, even when it hurts himself; “my word is my bond” being a common phrase we hear. Even if a righteous person took an oath rather rashly (see Leviticus 5:4), he would conscientiously keep his word.

In point seven, the righteous person does not lend his money for usury, or adding interest to the loan, and therefore does not take advantage of someone who must borrow. Besides, taking interest from fellow Israelites was forbidden as un-brotherly (see Exodus 22:25; Leviticus 25:36).

In his conclusion David stated that a person who follows this pattern of life will never be shaken, not only will he enjoy fellowship in the Lord’s presence, but also he will experience divine blessing and security. 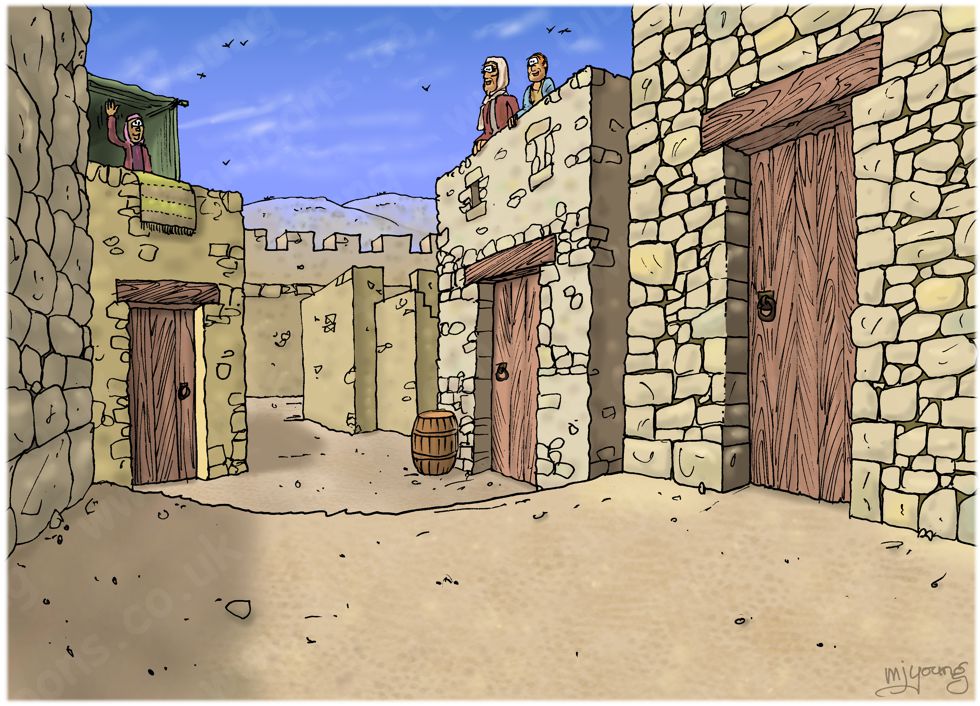 Psalm 15 – Lord, who may dwell in your sanctuary – Landscape