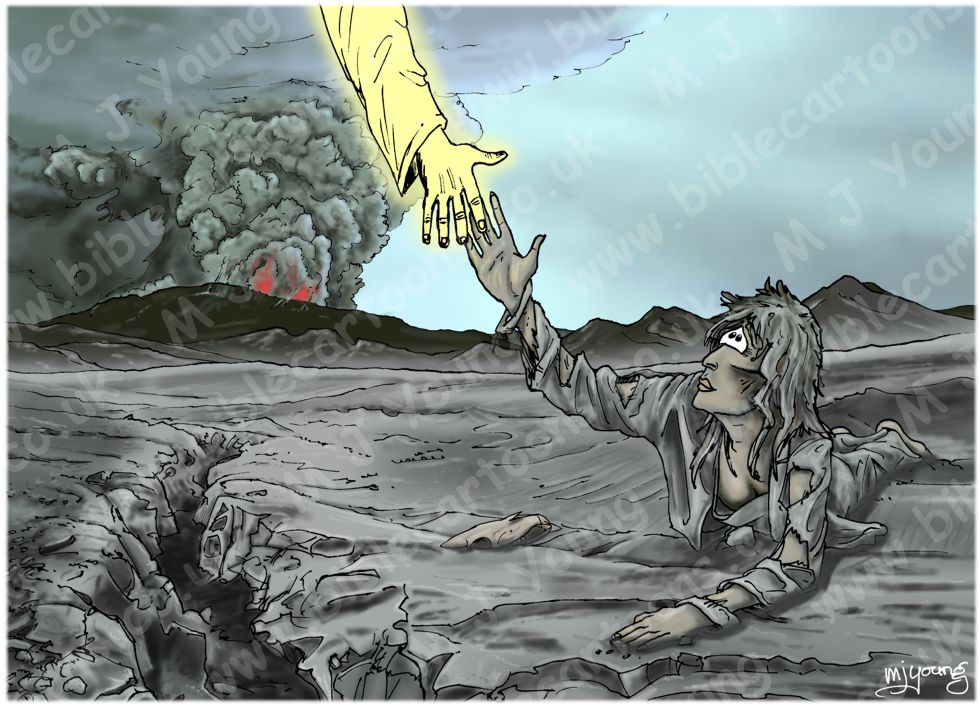 4 The Lord is exalted over all the nations,
his glory above the heavens.
5 Who is like the Lord our God,
the One who sits enthroned on high,
6 who stoops down to look
on the heavens and the earth?

7 He raises the poor from the dust
and lifts the needy from the ash heap;
8 he seats them with princes,
with the princes of their people.
9 He settles the barren woman in her home
as a happy mother of children.

LIGHTING NOTES:
The volcano in my picture is spewing out ash & dust, which is blocking the sunlight from reaching the scene. Nevertheless there is a general illumination from above.

CHARACTERS PRESENT:
a woman in the dust.

RESEARCH/ADDITIONAL NOTES:
Psalm 113 is an example of a Hymn, which lift the congregations praise to God, describing God’s greatness & majesty.

This scene came to me when I was studying this Psalm. It is a literal depiction relating to ash & dust. I often think of volcanoes when ash & dust is mentioned! I enjoyed drawing the erupting mountain. I decided to use a very limited palette, mostly greys & greens for this scene. The only other colour comes from the red volcano’s mouth & the yellow glow of the arm of the Lord God, reaching down to help the woman in the ash & dust. I have given her a little skin colour, to enable the viewer to see her a little better.

Notice the skull of a creature to the left of the woman’s prostrate body. It is based on a horse skull, though I have drawn it much smaller so as not to dominate the viewer’s attention.