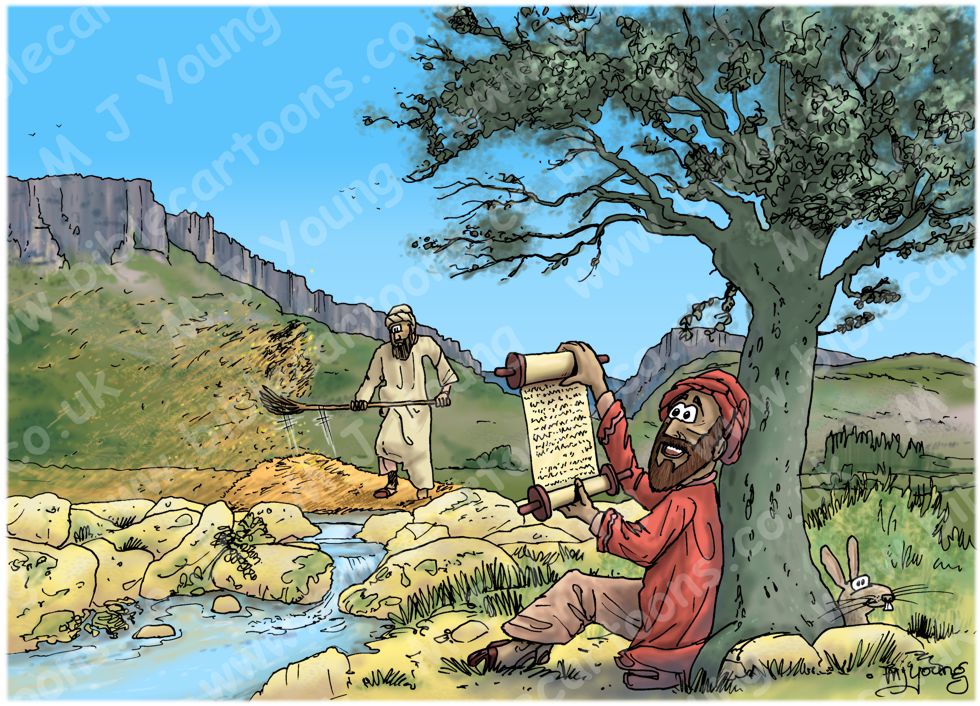 Psalms 1:1-6 (ANIV)
1 Blessed is the man
who does not walk in the counsel of the wicked
or stand in the way of sinners
or sit in the seat of mockers.
2 But his delight is in the law of the Lord,
and on his law he meditates day and night.
3 He is like a tree planted by streams of water,
which yields its fruit in season
and whose leaf does not wither.
Whatever he does prospers.

4 Not so the wicked!
They are like chaff
that the wind blows away.
5 Therefore the wicked will not stand in the judgment,
nor sinners in the assembly of the righteous.

TIME OF DAY:
Unspecified in Bible Text. I have set the scene in the early afternoon.

LIGHTING NOTES:
The sun is high on the right (west) casting shadows to the left.

CHARACTERS PRESENT:
A Hebrew man reading the word of God, on a scroll in hand.
A farmer in the middle distance is winnowing grain: using the wind to remove the chaff from the grain.

RESEARCH/ADDITIONAL NOTES:
Psalm 01 is an example of a Wisdom psalm, which probe life’s mysteries to teach the congregation about itself & God.

I decided to set this scene in the Valley of Doves (aka the Valley of Wind), between Mount Arbel and Mount Nitai. Although the valley is not mentioned in the bible, it is entirely possible that Jesus and his followers may have walked here on their way between the sea of Galilee and Nazareth. The Valley of Doves/Wind runs east to west and leads to the Mediterranean Sea. Air from the Mediterranean can cross the Sea of Galilee here leading to the squalls and sudden storms that the Sea of Galilee was famous for. One such storm is recorded in Matthew chp 08 and/or Mark chp 04.

This scene shows a man sitting on the ground below an oak tree, reading the word of God; “his delight is in the law of the Lord, and on his law he meditates day and night” (verse 2). The Psalm says that sort of person is like a tree planted by streams of water… of the sort the man is sitting under!

Contrast the fate of that man with the way of the wicked, from verse 04…”They are like chaff that the wind blows away.” The farmer, who is winnowing grain in my scene, provides a visual reference of being “blown away like chaff on the wind”. Chaff is the name given to the husks of corn or other seed, and pits of unwanted material (leaves, stalks, etc) that a farmer separates from the grain. The act of winnowing is where a farmer uses a folk to throwing grain stalks into the air, where the wind will catch the lighter chaff and blow it sideways, to collect downwind. The heavier grain will fall sooner to the ground, and be gathered up by the farmer. 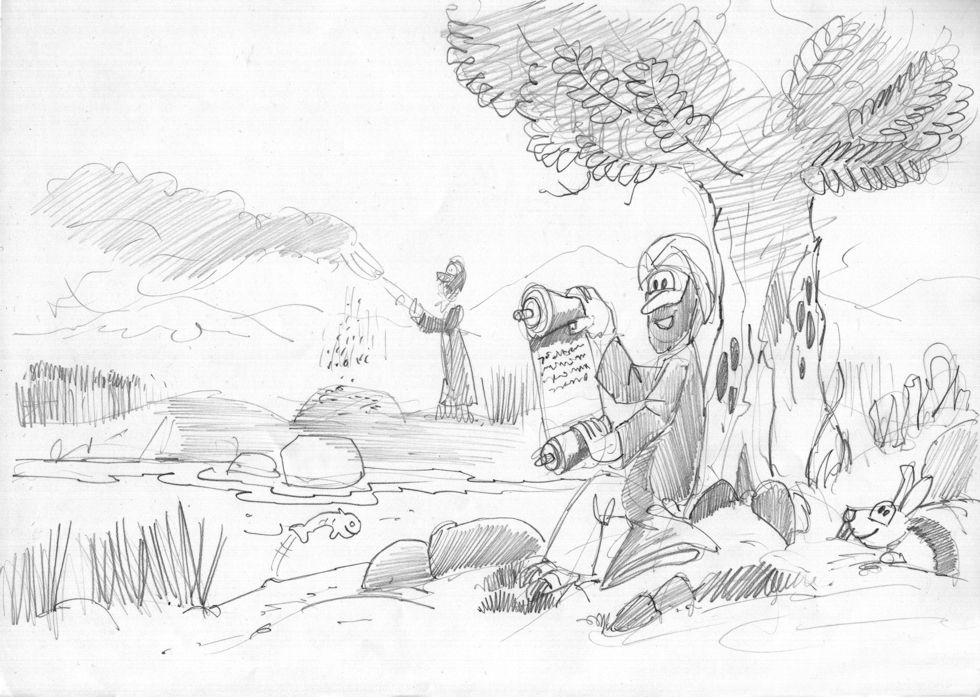