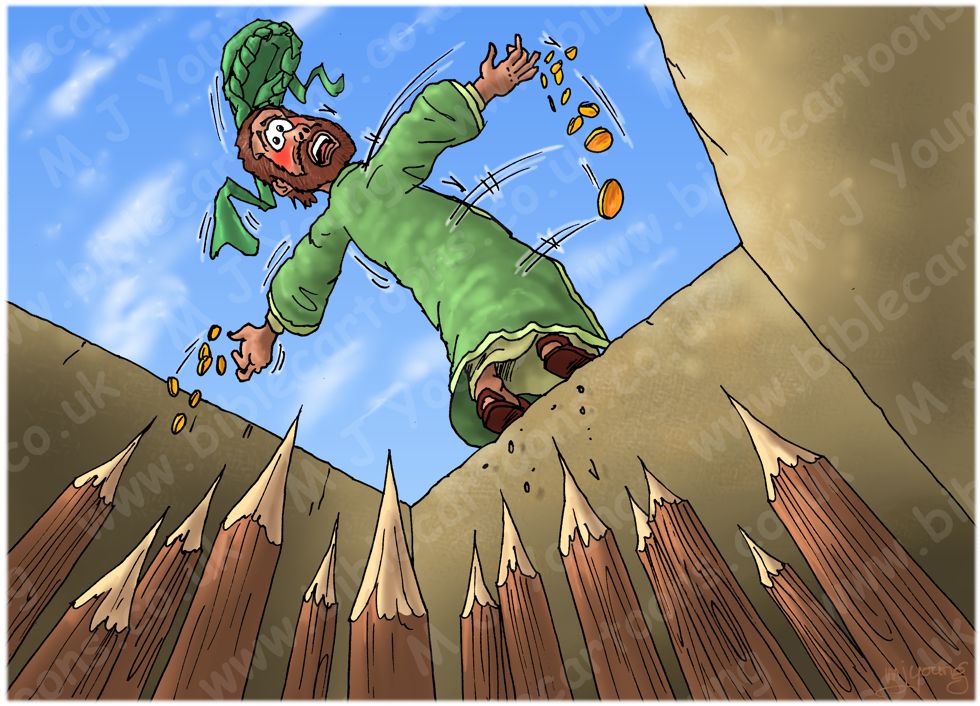 [1]
As in the Greek version; Hebrew reads, mist for those who seek death.

TIME OF DAY:
Not specified in Bible reference; daytime.

LIGHTING NOTES:
Sunlight from above illuminates this scene, making dark, threatening shadows in the pit!

RESEARCH/ADDITIONAL NOTES:
This is my fairly literal interpretation of this Proverb. The message version (see below) makes the meaning fairly plain: if you get to the top (e.g. promoted in your field of work) by cheating and lying, then you may well succeed, but only to die in the achievement! This is a Proverb designed to get the reader to check his or her moral compass, before calamity comes if it is pointing in the wrong moral direction!

Bible References.
Here are some other Bible versions of this particular Proverb, which gives a slightly different emphasis on it:

Proverbs 21:6 (MSG)
Make it to the top by lying and cheating;
get paid with smoke and a promotion—to death!

Proverbs 21:6 (GW)
Those who gather wealth by lying are wasting time.
They are looking for death.

Proverbs 21:6 (ANIV)
6 A fortune made by a lying tongue is a fleeting vapour and a deadly snare. [2]

Proverbs 21:6 (AMP)
Securing treasures by a lying tongue is a vapor driven to and fro; those who seek them seek death.

“Of them that seek death—Instead of mebakshey, “them that seek,” several manuscripts, some ancient editions, with Symmachus, the Septuagint, Vulgate, and Arabic, have mokeshey, the snares. He who gets treasures by a lying tongue, pursues vanity into the snares of death. Our common translation may be as good. But he who, by the snares of his tongue, endeavors to buy and sell to the best advantage, is pursuing what is empty in itself; and he is ensnared by death, while he is attempting to ensnare others.”
[Source: Adam Clarke’s Commentary]

“Verses 6-8 refer to the wicked—their lying, violence, and devious actions. Wealth (a fortune) acquired in dishonest ways (by lying) will not last (cf. 10:2; 13:11); it will fade quickly like a vapor (cf. 23:4-5; 27:24). And a deadly snare is the way some Hebrew manuscripts, the Septuagint, and the Vulgate read, but most Hebrew manuscripts read “seekers of death” or “for those who seek death.” The thought is either that money gained dishonestly will ensnare rather than bless a person, ultimately bringing him to his death, or that seeking money dishonestly is like seeking or pursuing death.”
[Source: Bible Knowledge Commentary]