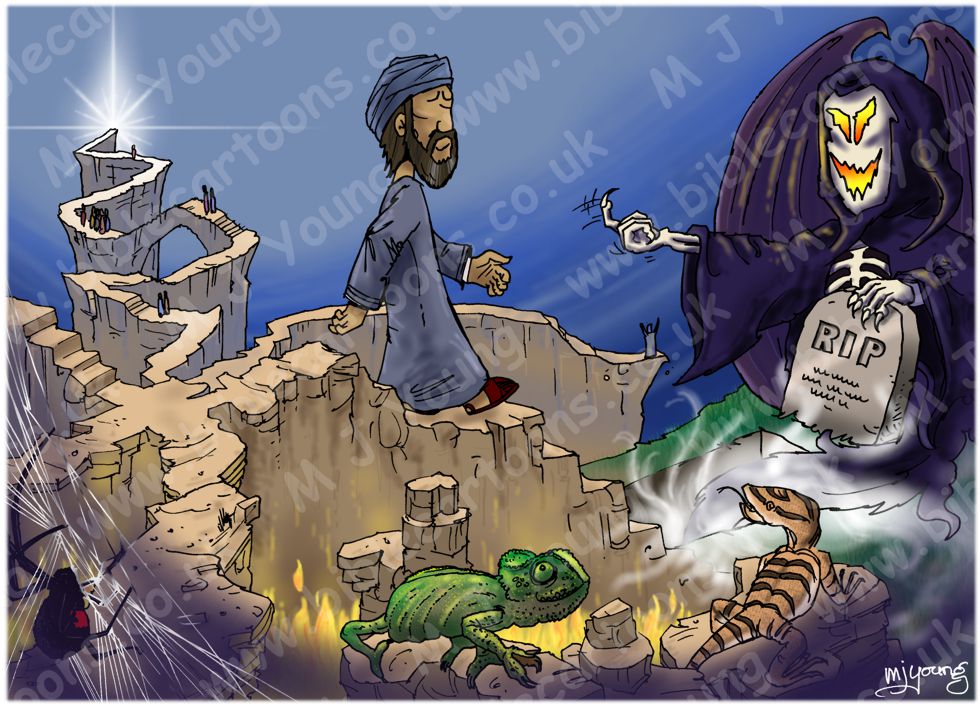 Proverbs 14:12 (ANIV)
There is a way that seems right to a man, but in the end it leads to death.

TIME OF DAY:
Not specified.

LIGHTING NOTES:
There is a general, ambient light all around. In addition there is a star-like glow coming from the end of the rock pathway in the background. That glow represents the doorway into heaven. There is also a fiery glow from the flames in the foreground, & also from the eyes & mouth of the skeletal, deathly figures on the right.

CHARACTERS PRESENT:
Death, in the form of a hooded, cloaked, skeletal figure, on the right of the scene.
A man walking on the pathway that seems sensible to him.
There are several figures on the pathway that leads to heaven, & one who’s just reached the end of a cliff-top pathway, which his hands in the air!

RESEARCH/ADDITIONAL NOTES:
The 2 lizards in the foreground are (on the left) The Common Chameleon (Chamaeleo chamaeleon recticrista) with the Desert Monitor (Varanus griseus griseus), on the right.

On the left is a Black Widow spider (Latrodectus revivensis) spinning a web across another of the life pathways that the people in this scene could have walked.

I like The Message Bible’s version of this scripture, which reads, ‘There’s a way of life that looks harmless enough; look again—it leads straight to hell.’

The Amplified Bible version is good too; ‘There is a way which seems right to a man and appears straight before him, but at the end of it is the way of death.’

I think this particular Proverb is saying that there is a pathway that presents itself to our minds, which (on the face of it) seems sensible, helpful, & that appears to lead to our happiness, fulfilment & security (life.) In fact I think there are many, many pathways or routes that look as if they may be helpful to us. But, as we all know, looks can be deceiving!

In my illustration, the man can be seen walking confidently forward. He is self-assured that he has chosen the right path, a route that his mind & self-assessment tells him will lead to his own happiness & fulfilment. However…

…This Proverb says, “There is a way that seems right to a man, but in the end it leads to death.” Clearly, we are quite capable of making (poor) choices, which, in fact, do not lead to our own happiness, fulfilment, & life, as we had hoped they would, but instead they lead to our (eventual) eternal death. This illustration is intended as a stark warning – BE SURE WHAT PATH YOU ARE ON! It may seem to be good, & you may hope that your choices will lead you to life & eternal life after death, but you need to be certain.

For a fuller explanation of the meaning of this Proverb follow this link: 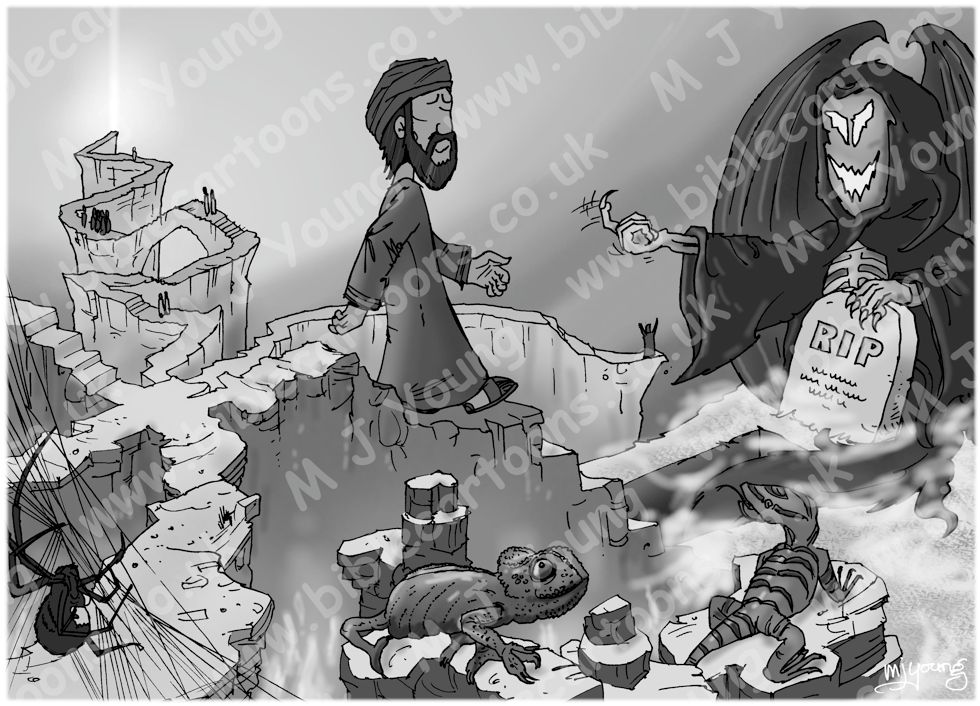